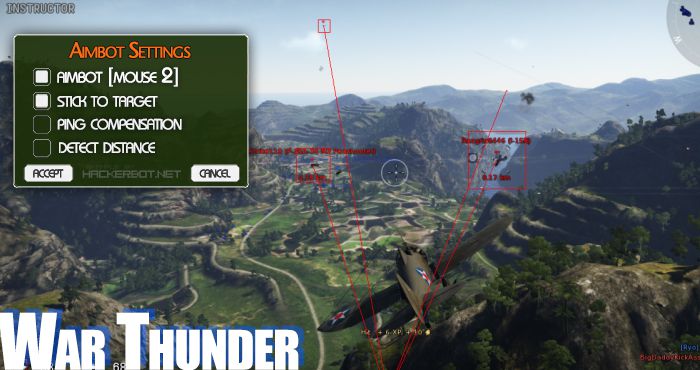 Is there a way to cheat in War Thunder?
Certainly, yes. There are certain programs that will allow you to see opponents regardless of distance and terrain and there are auto aiming and chasing scripts, also called “aimbots” that allow you to automatically stick to a target in dogfights / tank /sea fights and aim at them. These kinds of cheating tools once Downloaded will allow you to dominate the battlefield in Tanks, Ships and in the Air. However, there are NO god modes, Silver Lions addes, Golden Eagle generators or similar.

Cheats in War Thunder are mostly ways and techniques that allow you to get more silver lions, experience and unlocks in a shorter amount of time. There are ways to do this that are achievable manually, such as exploits and farming techniques and there are some cheats that require software in order to be achieved, such as ESP hacks, aim bots and farming bots. Generally cheating in this game will allow you to progress through the unlocks and levels much faster and allow you to save some money. War Thunder can be quite a grind and that’s why most pros and serious players are using some kind of cheat in order to keep on top of the competitive War Thunder scene. There are no Cheat Codes in this game, since cheating is not an intended part of the game experience. It also need to be noted that important values in this MMO are processed on the game server and cannot be changed through hacks. 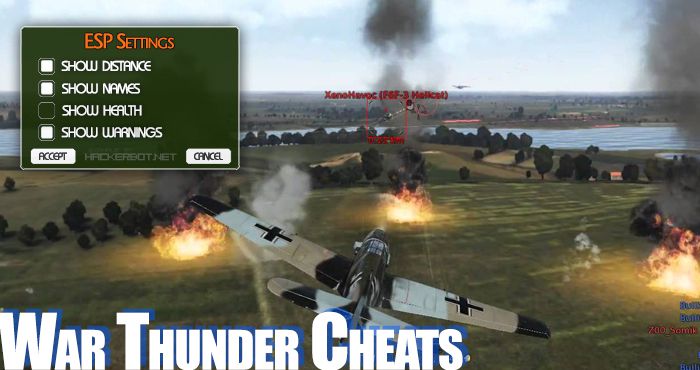 Aimbots are essentially software programs that will allow you to activate an auto-aim function that will aim for you and even shoot without your input, making kills much easier. Usually these programs will allow you to map a key to the auto aiming and all you do is to hold down that key in order to lock on to an enemy and shoot them. Obviously your aim is still limited by how fast your plane/tank/shit can maneuver. Aimbots work for ground battles, air battles and sea battles alike, since the aiming is almost the same for all of these. Aimbots usually inject code into the game and are therefore potentially detectable and can get your account get banned if you use software that is outdated, so please make sure that the software you are using is up to date before using it live or subscribe to a paid hack. Aimbots can be quite unfair towards other players and we advise our members to use them with caution in order to not annoy too many people and avoid harming their game experience.

Aimbots in Ground Forces vs. Sea Forces vs. Air Battles
While the aimbots in War Thunders air battles will mostly help you to stick to your target effectively and do a part of the aiming for you, in Tank and Ship Battles, the aiming can be done a lot more accurately. In WT Ground Forces arcade battles, the aimbot is able to not only able to aim at enemies, but also to aim at their weakest spots, allowing you to get one shot kills in many cases. In simulation or even historic battles the bot will have to be configured in order to do the same job, since there is no accurate hit indicator. Overall you should the aimbot to be most effective in arcade battles land, sea and air. Also the aimbot will be more effective in tank vs. tank battles than in air or land engagements. However, due to the very realistic oriented nature of the game, aimbots will never be able to be perfect. After all computers are not 100% accurate at aiming either when it comes to real world application. 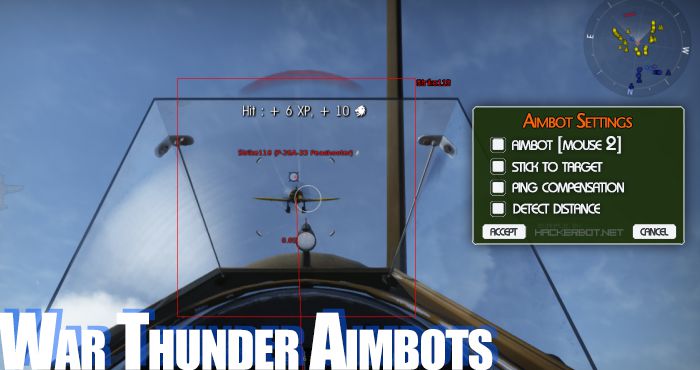 ESP stands for “Extrasensory Perception” and ESP hacks are basically hacks that can display information to you that usually are not part of your user interface. The most useful one in War Thunder is probably the “aiming at you” notification that can warn you if someone is aiming in your direction. – This can be very overpowered, since it gives you these few extra seconds in order to avoid getting taken down. ESP hacks can also display all enemy positions, their health, ammo and a lot more information that can potentially be useful to you. This kind of hack will be especially effective in bigger historic battles that include sea, ground and air forces. In combination with an aimbot, ESP hacks become one of the most potent methods of cheating in this game.

ESP Hacks in Tank, Ship and Plane Battles
Obviously, the application of ESP hacks will be most successful in Ground Forces (Tank) battles, since that is where you, the player, have the worst vision of your enemies. Beyond that the application of ESP hacks will be fairly useful in certain sea maps and air maps as well. – Basically whenever the vision is obscured, this kind of tool is quite convenient to have. 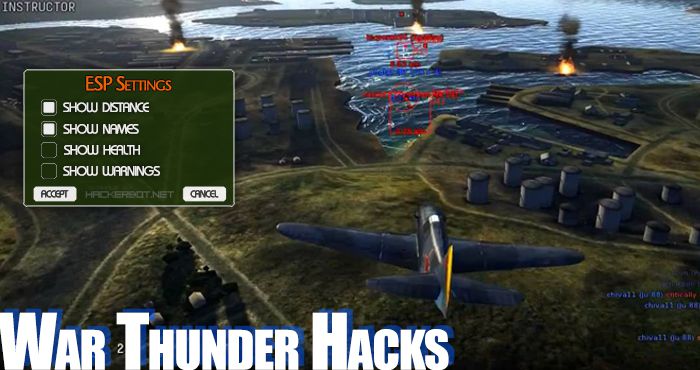 Use of ESP Hacks and Aimbots in Historic and Simulator Battles
We do urge our members not to use aimbots and ESP hacks in historic or simulator battles. These game modes are made to experience the non-gamy version of this World War 2 simulator and cheating is something gamy, right? Aimbots and ESP hacks are very overpowered in sim and historic matches, as you might imagine and using them will cause a lot more damage to the game experience of other players than if you do it in arcade battles. So please for the good of War Thunder, the gaming community and the peace, do not cheat in these battles. In arcade the people you shoot down will respawn in a few seconds, but here they won’t and they will be quite annoyed. Beside that, historic and sim battles are not popular enough as it is and we really do not want to see them go away entirely. You cheat in game, not in simulations. These simulations are more of a historic-nostalgic experience, than they are a game.

In every MMO there are certain values that cannot possibly be changed ever. These values are usually very important values that are part of the game economy and the way the game is monetized. In War Thunders these values include your level, health, plane unlocks, experience, golden eagles and silver lions. These values are not processed on your PC and can therefore not be changed using any hacks or generators. Anyone telling you otherwise is probably trying to scam you by either selling you bad software, letting you fill in surveys, stealing your login info or letting you download viruses. So please do not fall for these lazy scams. If these values were hackable, the game would die within weeks, since everyone would use the cheat and the game would stop being fun and competitive in any way.

How much do War Thunder Cheats cost right now?
Around 10$ to 25$ per month depending on quality and whether they include ground forces and the sea battles mods. With a game as diverse as this one it is recommended to use software that is more complex.

Are there any Free WT Cheats for Download on the web?
Probably yes. However, due to their availability, they will get outdated fairly quickly and people that continue using them may get banned from the game. It is a high risk and you always need to be extra careful when downloading stuff from public platforms.