A State of Survival Hack is any method, tool, app, software or technique that allows players of State of Survival to gain siginificant advantages, farm biocaps, resources, rare heroes faster, build more troops, filed larger armies and build their base up faster. While there are many kinds of hacks and cheats for State of Survival, hacks for unlimited or free Biocaps, Stamina and Resources do not exist.

Code hacks are alterations to the State of Survival game app either in the app files, as is the case in mods, or in the game memory, as is the case when using memory editing tools or other similar mobile game hacking software. The easier method of using hacks in State of Survival is the use of modded APKs for Android and iOS mods, as they are easier to download and install, if still not without challenge, since you will need to still follow a list of instructions and fulfil prerequisites to use this cheating method properly and get it to work. – What features and cheats can be implemented depends very much on the version of the game, server-side processing and checks, what mobile OS you are playing on and other factors: Generally automated farming, speedhacks, auto reward collection, scouting, minor damage hacks, disabling ads and similar stuff may be possible. Unlimited free biocaps, alliance points, metal, food, wood, gas, stamina, speedups, troops, VIP level and similar cheats are not possible due to server-side processing and State of Survival being an online mobile game. Mods for State of Survival

Modding is by far the most popular cheating technique in mobile gaming and this of course includes State of Survival too: Mods are modified or modded versions of the standard game app, either an APK or IPA file, depending on if you are playing on Android or iOS, that has been modified and fitted with cheating options, game hack features, scripts and other means of gaining an edge in game. – While not completely trivial, the installation of mods is generally easier than hacking the game manually, though you may still need a rooted device or emulator, a jailbroken iOS device, the ability to replace system files and to follow simple instructions in order to download and install mods for State of Survival correctly. – The downside of this means of cheating is that with every single game update, patch or hotfix that is pushed to the State of Survival game client, there comes a need to update the mod, which means you need to wait for the creators of the modded game file to reapply their modifications to the new client, download and install again with every update. Often overlooked but probably the most powerful cheating method available in State of Survival on Android and iOS alike: Bots or ‘robots’ are app and software that are able to play the game automatically, autonomously make decisions, farm infected, threats, build and upgrade your base, automatically scouting and attacking players, training and healing troops, help alliance members for alliance honor points, collect rewards from dailies and other tasks for free biocaps, resources and other goodies, do plague zones, research techs, complete challenges, collect daily rewards, participate in alliance showdowns, open honor crates and much more. In essence, bots can play the game just like you, but they can do it 24 hour every day for ever, allowing you to lean back and watch your account grow, amass tons of biocaps / gems, resources and maxed heroes, then enjoy the spoils when playing yourself. I you want to learn more about how bots work and how to learn the basics or creating bots, then check out this tutorial. There is no such thing as an ‘Online Resource Generator’ for free biocaps / gems, free VIP levels, free in-game purchases, heroes, and resources and there are also no online hacks that or any tools that allow you to push a button on a website to get cheats working. – These are all fake and will never work. Actual working hacks will always require a download either of a tool, modified game files, system files ect. Of course that does not mean that any cheat that is a download is necessarily legit, working and up to date either. In fact most hacks that you will find online for State of Survival are fake: Either fake mods that advertise mods such as money mods that are impossible or fake resource generators that will not work either. If you want to find cheats and tools from legitimate sources, then use this tool to find them. Please do not complete any offers, surveys or app downloads, as you are giving the scammers money every time you do. The most versatile, but also the most difficult way of enabling cheating features in State of Survival used by game hackers are game hacking tool, such as memory editors, data editors and similar software. This kind of software allows you to modify the game memory while the game is running instead of modifying the underlying game files from which the game is run. – The greatest upside of using this particular method is that techniques applied may keep working though many different updates for tutorials, scrips and guides using apps like Game Guardian for Android or GameGem for iOS as an example. Another advantage is that in some mobile games it is actually possible to use game hacking tools with no root and no jailbreak on your device and not using any emulators either. However, the downside is very obvious as soon as you try to use memory editing techniques: This is an involved process and will require you to learn game hacking basics at the very least to even be able to follow the tutorials and guides you need to hack State of Survival successfully. 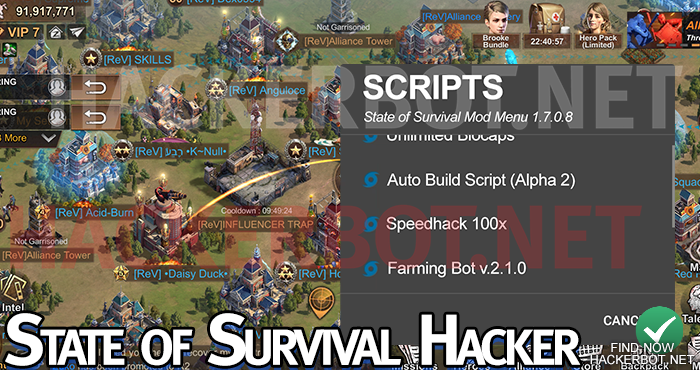 Mod menus are the premium version of ‘mods’ and will usually feature an ingame menu that allows a user to customize cheats, enable and disable individual features, automatically update them mod once it is outdated, keeping the software working and up to date at all times and generally mod menus will also be made by the best modders and programmers in the industry and come with the most diverse and numerous features. However, of course nothing in this world is free, which is why most full versions of mode menus for State of Survival will require you to have a subscription. Limited or ‘light’ versions of these mod menus are usually available for free download for those who can’t pay or are looking to test the mod. Overall, mod menus are pretty much the gold standards for game hacking on mobile and are highly recommended.

Secondary and alternate accounts are another extremely common way of cheating in State of Survival, allowing you to play multiple accounts at once and use the secondary accounts to feed your main account either through being in the same alliance and using them as allies in attack marches or attacking the secondary accounts and using them as farms. Either way, having multiple accounts is a relatively easy and extremely effective way of getting more resources, more troops, making attacks more powerful and even getting more rewards and biocaps over time. However, having many accounts can get you banned from the game, which is why using a VPN when logging into your secondary game accounts on State of Survival is highly recommended to make detection and game bans impossible and keeping you safe.

Exploiting is the use of bugs and unintended game mechanics to gain an advantage in a game and can be used to great effect in State of Survival as well whenever bugs crop up in new updates. – This way of cheating is extremely temporary, as the cheat simply stops existing once the developers find the underlying buts and fix them with a patch or hotfix. However, while an exploit bug is active, it has the potential to make cheats possible that would otherwise be impossible. Bugged shops and missions may allow you to collect unlimited free biocaps, free legendary heroes and hero shards, resources and more for a limited time. It must be said that exploits such as bugged rewards and duplication glitches are extremely rare, but they do come up in most games at some point in their life cycle, so it pays to keep an eye on the horizon.