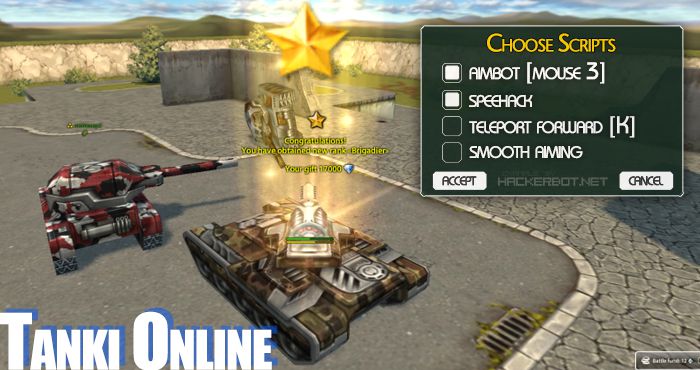 Now first it has to be said that Tanki Online is one of the few online games that was heavily client-side processed in the beginning and due to that fact got hurt by cheating a lot, before restructuring their game. – We don to want to hurt game and have not taken any part in these past cheating epidemics. Cheating in Tanki Online is the use of any and all means outside of the usual game client and its toolkit in order to gain more crystals, turrets, hulls, levels or other important resources. Over the years there have been a lot of methods used to cheat in Tanki Online: Exploits that allow you to gamin a lot of crystals from special offers and contests, aimbots that will aim for you in matches in order to get more kills and therefrore more crystals and levels, ESP hacks that let you know where your enemies are, farming bots that will farm for you automatically and even the cooperation with other players to get more kills. Since this is a flash game, the game client can be hacked to include wallhacks, aimbots similar cheats like noclips or even flying hacks. Sadly at this very moment is quite hard to find hacked clients, since not a lot of game hackers know how to deal with flash games. Overall however, there are a lot of ways to cheat in tanki online and all there is still needed is an active hacking community to provide the hacks for free. If you know how to hack browser game .swf clients, then you are welcome to try and share the result with our members. Other than that the only way to go for this game will be to use paid hacks. 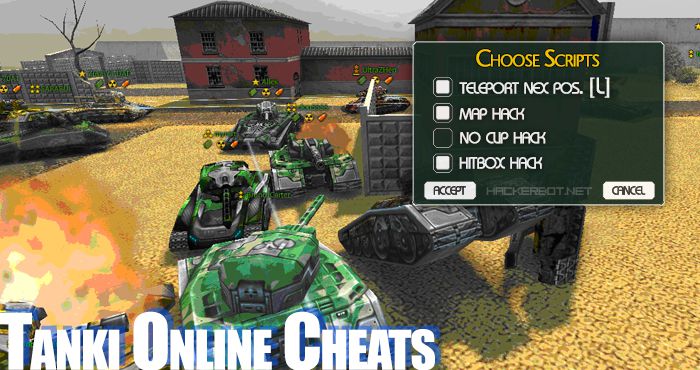 Auto aiming software (aka aimbots) are most likely some of the most effective cheats in Tanki Online, since they pretty much allow you to hit 100% of your shots. Aimbots are taking advantage of the way the game processes its graphics: In order to display the whole map to you accurately, the whole map including all tanks has to be loaded onto your client (PC) and therefore the tanks can be located and aimed upon. Auto aim is usually bound to a button on your keyboard and will automatically lock on to targets in sight. Some aimbots will include a auto shooting function a well (aka triggerbot) that will make the aimbot even more effective. Now you will want to use aimbots along with turrets that have decent range, such as the rail, the thunder ect, obviously it is a lot less effective when used along with close-range turrets like the firebird or freeze. Especially sniping from far away using a high-health hull like the mammoth or the titan is highly effective using this kind of hack. Since Tanki Online is a flash game, it does not have any real client-side anti-cheat to detect this kind of hack, which makes hacked clients in general and therefore also aimbots relatively save to use. Aimbots are mostly used to farm crystals a lot faster, since they allow you to get a whole lot more kills per match and therefore a bigger part of the battle fund and higher rewards. However, caution must still be used when using this kind of hack, since people will report you if you are being too obvious about hacking. We also urge our members to use hacks in such a way as to not annoy their fellow players. – If you love the game, then you will use cheats with the utmost respect. 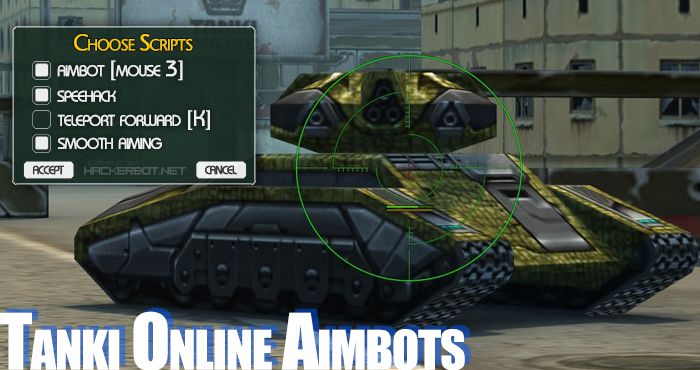 Farming bots are programs that take control of your Tanki Online account in order to farm crystals automatically. Now the main way how bot farming works in TO is mining: The bot will buy mines, then place them in statistically important places on the map and then hide, allowing the bot to pretty much passively collect kills and therefor crystals allowing you to buy more hulls, guns and other goodies. This is also a really effective way of leveling up without having to spend 100s of hours farming matches. Bots are not really able to actively participate in fights, since they would not only need and ESP hack for that, but also some kind of auto aiming software and having all 3 in one packet is nearly impossible, since each is really hard to maintain and update. So yea, while farming bots in Tanky Online do work and are possible to run, we do not expect to see a lot of them. Again, the main reason why is that not a lot of people know how to create botting software for flash games. 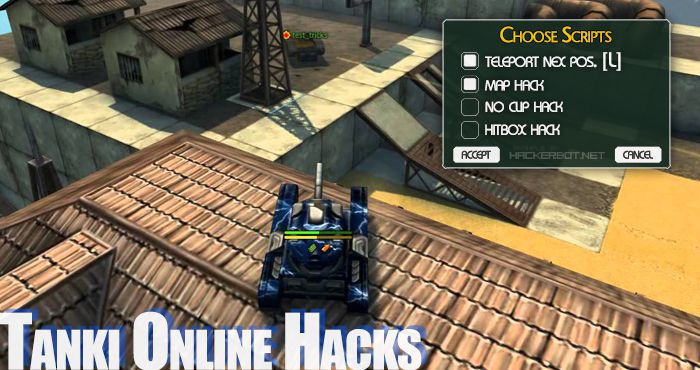 There are a lot more hacks and cheats that can be achieved by editing the Tanki Online client and altering its functions. These hacks are mostly centered around movement and display of information: You can make your tank fly, you can make your tanks jump, you can drive through walls and other objects, you can teleport to another coordinate, you can eliminate recoil, allowing you to mount hgh-powered turrets on very mobile hulls like the hornet. You can also create ESP Wallhacks that can display enemy positions, health, turrets, hulls and other information to you. And again, since this is a flash game, there is really not practical way of detecting these hacks. However, these hacks will still get reported manually if you are using them in a reckless way. We are not 100% sure what other values can be manipulated by editing the TO client, but we expect there to be even more possibilities.


Tanks Online Speedhacks, Maphacks, NoClips, Teleport Hacks, Vacuum Hacks ect
Back in the day, when Tanki Online was still heavily client-side processed, there were a lot of cheating methods that are now impossible to achieve due to the new structure of the game. Back then there were almost no server checks that would filter the information sent by the game clients on a players PC, allowing cheaters to do almost anything. Really the only values that could not hacked back then were health and damage. Cheaters could speed up tanks and fire rate, clip through walls, teleport to any point on the maps (including flags), fly, vacuum hack all the enemy players and kill them all at once, change the size of their own and enemy tanks and a lot more. They were even able to get under the maps or into buildings and other objects, basically resulting in a semi god mode. However, these cheats have luckily been dealt with, since they really hurt the still very young game. We do not blame the developers for not implementing more server-side processing or checks, but we also do not blame the cheaters for what they do: cheating. However, we are glad that the game has adjusted and overcome that difficult time, since we do love the game itself and do not want to see it go. Most of these cheats are now not possible anymore, or at least not to the huge extent that was possible before. It is good to see games that were stuck in hacker-hell, improve and get out of there.

There are certain values in Tanki Online that cannot be hacked at all: Your Health (God Modes), your Crystals, Gold Boxes, Unlocked Turrets (guns), Hulls, Microupgrades, Other Unlocks and Upgrades, Score, Kills and your Level. All these important values and other cannot possibly be hacked. Imagine if they could be changed: Everyone would do it and the game would get boring very quickly and eventually die. So the pure fact that the game is still profitable and working should prove to you that this kind of cheat simply does not exist. For those who still not believe me: In single player games everything is processed on your PC or machine, allowing you to get any cheats working that you can imagine. However, Tanki Online is an Online Multiplayer Gams which means that a part of the game is processed on the game server, a PC far away that you do not have any writing access to. And since you cannot access the game server, any value stored there cannot be hacked from your side. So unless you know a developer of administrator of Tanki Online, then you are out of luck. As for all the people out there on the web offering you Generators, Hacks or Adders that do these things. You should know better than to believe people that offer you impossible things and to fill in their surveys, download their viruses or even give them your login info.