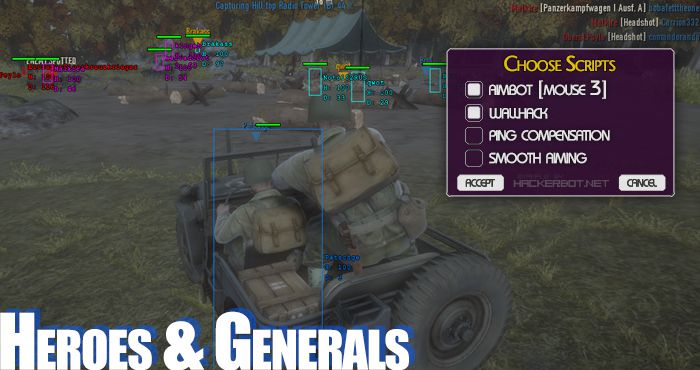 Is it possible to Cheat in Heroes and Generals at all?
Yes it indeed is. As in most shooters it is possible to use software not only to highlight all your enemies and allies, but also to automatically aim and shoot them using 3D radar and aimbot software. There are also some smaller exploits available too. However, there are NO god modes, no unlimited ammo or level hacks.

Cheating in Heroes & Generals is essentially to use any kind of tool or method that is not part of the official game, it’s rules and toolkit in order to get more credits, gold and levels faster than it would be possible within the above mentioned confinements. There are multiple ways of doing this obviously: On one had one is able to use so called hacks, DLL injected programs that will add functionality to the game, such as ESP hacks that let you see things you shouldn’t be able to see or aimbots that do all the aiming for you and grant you easy kills, easy credits, experience and gold. There are also cheating methods that can be done manually. Due to the fact that anyone can join a map, it is possible to create multiple accounts or work together with others and farm them for kills. If this is done systematically, there can be whole farming divisions that meet up at a certain spot of the map and take turns killing each other until their lives are exhausted. It is also possible to use bugs in the game here and there in order to gain more rewards more quickly. – However, these bugs are hard to find and very temporary in most cases. This practice is called Exploiting (using exploits) and is probably the most effective cheating method in Heroes and Generals, since it has almost unlimited potential. It is entirely possible that you can run across a frozen character and are able to kill him 1000 times during one match, getting you a huge amount of credits, XP and gold. However, cheating is risky and can get you banned, which is why you should use the cheats for good and use them carefully or you may get reported and banned. It is also recommended that you use paid cheating software, since free stuff usually gets detected fast. 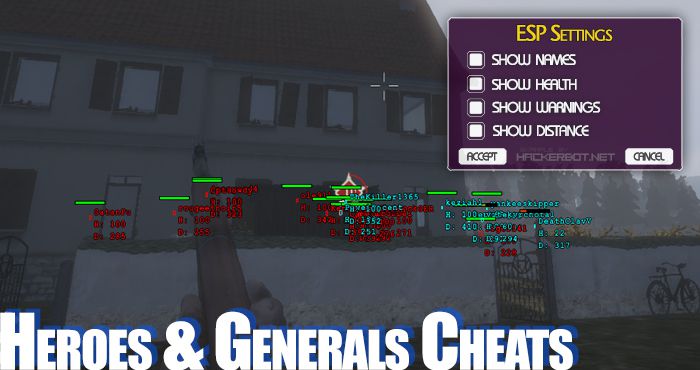 Aimbots, also known as Auto Aiming Software, has a purpose that is made pretty obvious by its name: To aim automatically for you, so you don’t have to bother with it. Usually an aimbot will allow you to bind a key or mouse button to an auto aiming function, as soon as you hold down the bound key, it will aim at the closest enemy in sight. Most aimbots also include a triggerbot that will detect if you are aiming at an enemy and automatically shoot them (trigger fire) if that is the case. Now obviously this is a very powerful kind of cheat to use in Heroes & Generals, since there is a whole lot of players on a single server and you often have line of sight on them, allowing you to easily farm kills and therefore credits, levels and gold to buy more weapons and classes ect. Now while cheap aimbots are quite easy to detect by just watching the behavior of a player, the more professional ones will allow you to enable options that make you seem more human when you are aiming: They will allow you to slow down your aiming speed, limit the aiming angle, so you don’t instantly aim at enemies behind you and so on. – It is highly recommended that you use a high-quality auto aiming bot in Heroes & Generals in order to protect your account. Keep in mind that if people notice that you are cheating, they will be able to report you. Alsp keep in mind that mods can see your accuracy rating and if it is at 30%+ that is very suspicious, so shoot around randomly here and there to reduce your accuracy rating. Aimbots are obviously most effective on recon, since they get around the blur you get when aiming at distant enemies. Please don’t overuse this kind of cheat and use it to protect new players: You will see that it is the most satisfying thing to help people if you have the luxury to do so. 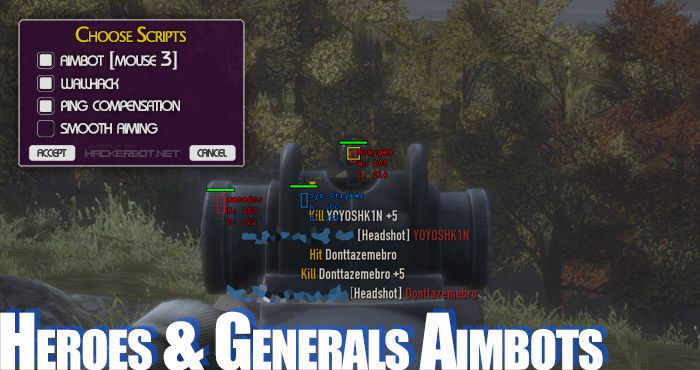 ESP Hacks, also known as Wallhacks, function very similarly to aimbots in that they exploit the way the client processes graphics on your PC: In order to show you the ongoing game on your screen, your surroundings have to be loaded onto your PC and processed there. – This allows hacks to extract the position of certain objects, such as your enemies, explosives, grenades, vehicles ect. So Wallhacks can show you where your enemies are through walls, they can show you heir health, weapons, ammo, explosives on the ground and so on. While ESP hacks are generally not as overpowered as aimbots, they are generally a lot more fun to play with, since you still need to play with skill to dominate a game. In addition to that Heroes & Generals Wallhacks are generally a lot cheaper to buy. As with aimbots, this is software that injects code into your game client and can be detected by most anti-cheat software, if it is accessible to anyone. For that reason we do not recommend you use free hacks of any sort, since if you have easy access to it, so do the people that want to get you banned. Usually free hacks get detected within the first week after release and may cause you to lose a lot of invested time and money. 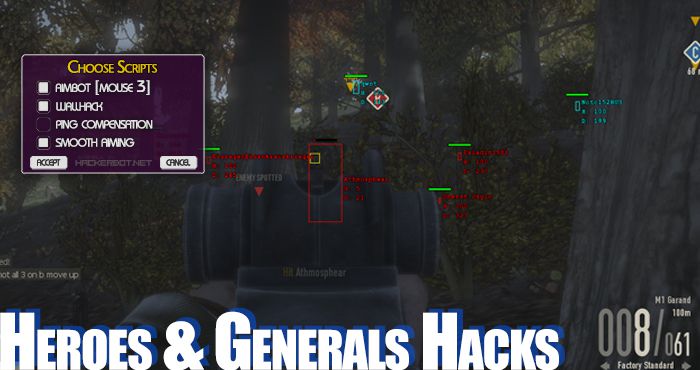 None of these kinds of cheats do exist. People offering you these kinds of G&H Hacks are out to scam you hard. – Don’t trust them. Important game values, such as your Health, your ammo, your Gold, your Credits, Level, Unlocks, Classes, Weapons, Attachments ect are stored on the game server and cannot possibly be changed using any kind of software. While this is certainly possible in single player games, where the whole game is on your PC, this in not the case for any Online Multiplayer Shoother, such as Heroes and Generals. – Here all the important stuff is processed and saved on the game server, a PC you do not have any access to and no one has, except for the game developers and admins. – So unless the person offering a service to get unlimited credits happens to be a game admin, do not trust them, don not fill in any surveys for them, do not download their viruses and please do not give them your login information. – You have now been warned.

How much does the average Heroes & Generals Hack cost?Your average online shooter hack costs around 10 to 20$ per month. – The longer the subscription, the less the program will cost you overall. As far as we are aware there are no safe hacks that would be available for free at this time (2015).