Is it possible to cheat in Battlefield Hardline?
Yes as in all the Battlefield games it is indeed possible to cheat using tools like aimbots to automatically aim, radar hacks to highlight enemies, vehicles or other objects and using glitches and exploits to farm money (cash), reputation  and ranks faster. – There are also god modes and unlimited ammo hacks for the single player of the game. However, for the multiplayer no such cheats exist.

Is it legal to cheat in BFHL and will my account be banned for doing so?
Cheating in video games including online multiplayer shooters is completely legal all over the world. However, the publisher of the game (EA) is allowed to ban any and all player accounts for any reason including cheating. In addition most Battlefield games use software to analyze statistics. – So as long as you are not griefing people and keep your K/D ratio within humanly possible range, you will be fine. The use of quality software that allows you to emulate human aiming is recommended however.

How much do Battlefield Hardline Hacks or Aimbots cost?
Usually we are looking at around 15 to 20$ per month of use. All hacks for this game use the subscription model, since the software needs to be updated regularly and be kept undetected. If people are offering you software at prices below 10$ (or even for free), they are probably not legit. 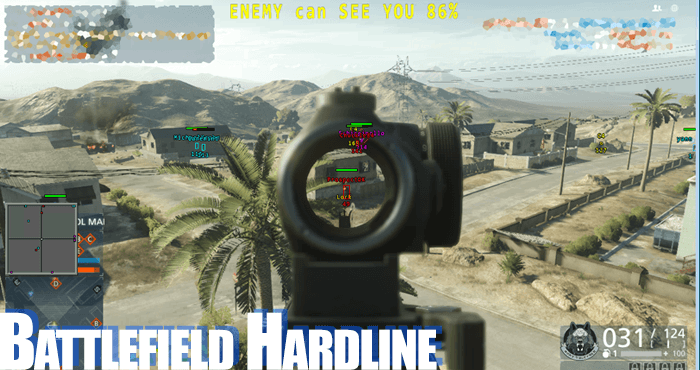 Battlefield Hardline General Cheating Methods
As in previous iterations of the Battlefield franchise, Hardline brings us pretty much the same ways of boosting, cheating, exploiting and hacking the game that we have previously seen: There are aimbots that will automatically aim your weapon and even calculate things like bullet drop and bullet travel time ect. There also are the usual radar hacks that show enemies on your screen and highlight them on a 2D map. Naturally, there will be boosting servers and people will make whole servers simply to level up accounts and unlock gadgets in order to get around all the farming that would usually be required. It is also very likely that there will be glitches that will allow people to get into buildings and underneath the map itself and essentially achieving a kind of semi god mode. BF Hardline continues the style of game that encourages grinding and there certainly might be a crowd that would rather just join a farming server or use some hacks to not have to spend quite as much time farming all the points to unlock weapons and gadgets for both sides (police enforcers, criminals), aquire weapon licenses and get to rank 150. It is also quite likely that there will be a special cheat developed for the “hacker mode” (commander) players in the near future in order to give them constant UAV ect. Cheating will probably be most useful in unlocking sights for weapons, since they are usually not very useful using iron sights and one needs to get some kills to make then viable. – A problem many people have had with the latest BF titles. There will also be some grey areas (almost exploits), such as knife and pistol servers and similar servers with very special kicking and banning rules that will be ideal for farming ranks. 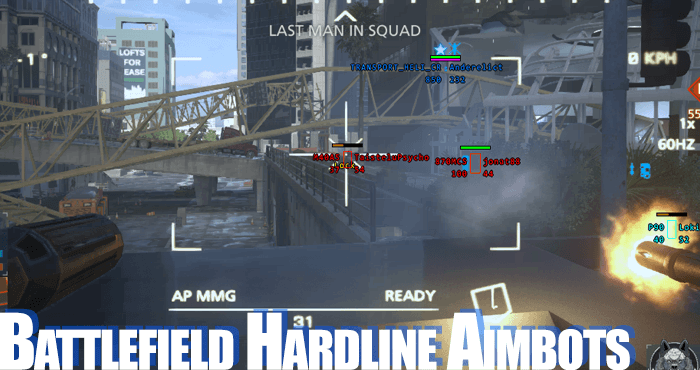 Battlefield Hardline Hacks and Aimbots
Battlefield Hardline hacks are programs / software that injects codes into the game, adding additional functionality to the game client and allowing you to see things or perform things that normal players could not. However, hacks are not able to unlock all weapons, get you unlimited money or change your rank, stats ect, since those values are not processed in the BF HL game client, but on the EA servers (battlelog). Probably the most infamous of all the hacks is the aimbot: Aimbots will automatically lock on to a target, aim at it and even shoot automatically in some cases. Advanced aimbots are even able to shoot through walls and so on. While auto aiming software is certainly the most effective way of cheating and leveling up if you do not own a private server or your own clan, they are easily detectable if you are using them without caution. The trick here is to use quality software that cannot be detected by client side checks and to use it in such a way as to seem like a good player (skilled), rather than a cheater. Advanced auto aiming software offers options to slow down aiming and make it smoother, all delays ect. We highly recommend that you use such options in Battlefield Hardline, since the game will be using a server-side anti-cheat system. 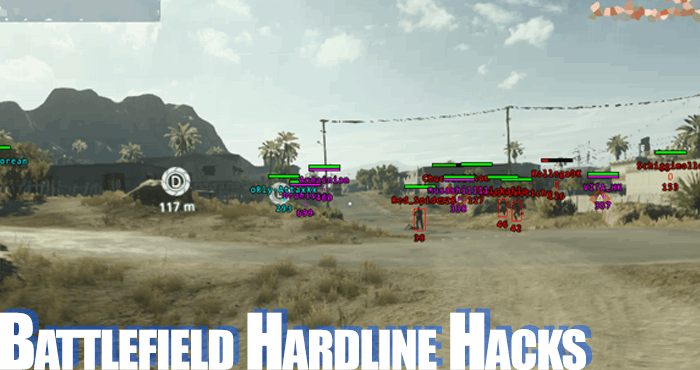 Battlefield Hardline Private Servers and other Exploits
BF games have always featured certain mechanics that made it very attractive to cooperate with the enemy or the own team in order to farm more score (points) and therefore ranks, unlocks, gadgets, battle packs and so on. Battlefield Hardline again features classes that are able to heal other players (operator), classes that are able to resupply ammo (enforcer) and classes that are able to repair vehicles (mechanic) and these mechanics can again be exploited in major ways considering that people are able to rent their own servers and make their own rules. A prime example for this is the existence of pistol only server or knife and pistol servers that allow medics and resupplies to farm essentially unlimited score, since fights always take place in a very small space and everyone get wounded all the time ect, resulting in a huge farm fest, since there are no grenades or other explosives that would be able to flush out enemy positions. That way the positions are solid and the points keep rolling as people resupply, get kills, and heal and so on. – This has been a kind of soft exploit in the Battlefield series ever since BF2 and makes a reappearance here in Hardline too. In even more extreme examples there are whole clans that rent their own private servers and use them to farm each other to boost stats and rank up faster. – In fact that is rumored to be the way most top players (scoreboards) got to where they are. Some ever buy multiple licenses for the game and use alts to farm from their main account. – A very effective way of farming, but risky considering  modern anti-cheating software analyses statistics. Use at your own risk. 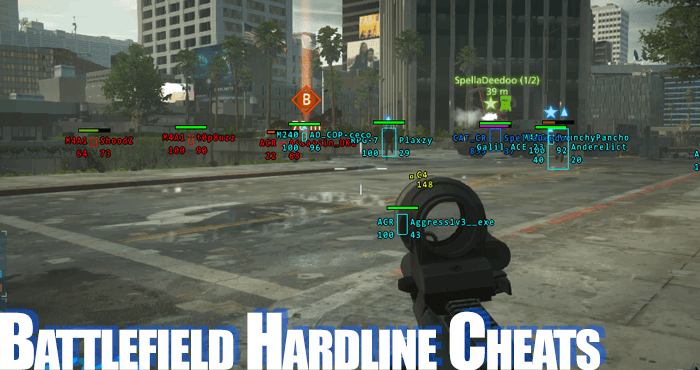 How to avoid getting banned from BF Hardline (Fairfight / Punkbuster)
If you go ahead and get yourself cheats for Hardline without reading these instructions, then you deserve to lose your license of the game and to rebuy it. Cheating can get you banned from the game and should not be taken lightly. So here are the most important points to making it work for you:

1. Do not use potentially detectable hacks (ones you find in random forums), since they will be detected by PunkBuster. Only use private software that cannot be easily downloaded and blacklisted.
2. Hide your suspicious activity. Activate any functions included in your aimbot to smoothen aiming and make you seem more human.
3. Be nice, don’t flame and if someone accuses you of cheating, leave the server ASAP. You do not want to be reported to EA.
4. Cheat to help others and to skip the grind, not to exert power over others. This attitude will not only help you to avoid bans, but also to enjoy the game more while using cheating software. Try to help Hardline n00bs and you will find a sense of achievement.
5. Keep your K/D and accuracy stats in a humanly possible range. FairFight will use these stats to find cheaters (most likely). We do not know what stats are used, but these are very likely to be a part of it.