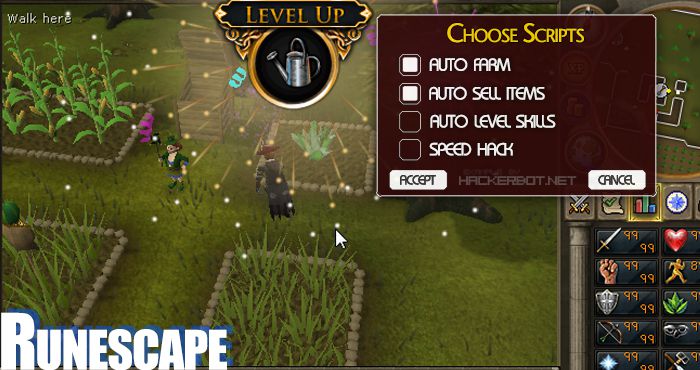 Is it even possible to Cheat in Runescape?
Yes it is definitively possible. Since the game is pretty simple, using scripts or bots to farm and level skills is pretty simple and that is indeed the most used cheat in RS3.There are also some smaller client side hacks for Download and exploits that may allow for item duplication (dupes) and so on. However, there are NO gold generators, item adders or item editors of any kind.

There are 3 basic ways to cheat in Runescape: Hacks, Bots and Exploits. Hacks are programs that change the way the game works and displays information to you. Hacks can give you minor and significant advantages in the form of seeing through obstacles, walking through walls, flying, seeing information that would not otherwise be visible and other cheating options. Bots are probably the most effective way of cheating in Runescape, since they can take care of most the repetitive tasks in the game. Bots are simple scripts that take over control of your character and perform tasks like skilling, farming, selling items, fighting to level up combat stats and basically everything you need to do in Runescape to reach the endgame. Exploits are bugs that can be used to level or skill faster of farm gold very effectively. Exploits in are mostly temporary and get patched after a while. 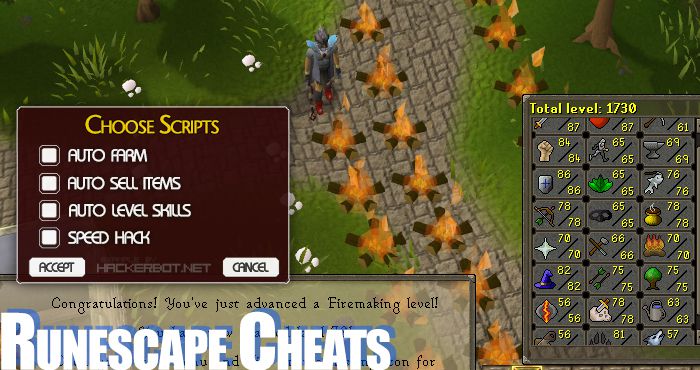 Bots are reading your computer’s memory in order to see all the data they need in order to navigate your Runescape character through the game and complete simple and more complex tasks automatically without your input. Bots can easily skill up most skills: Crafting, Mining, Smithing, Fishing, Cooking, Firemaking, Woodcutting and Runecrafting. Bots are also quite effective at leveling you combat stats (Attack, Strength, Defense, Ranged, Prayer, Magic and Constitution/HP) through automatically fighting mobs. These stats can be leveled by almost any decent RS bot at this time.

When it comes to leveling member skills (Agility, Herblore, Thieving, Fletching, Slaying, Farming, Construction, Hunting, Summoning, Divination, Inventing)  and Dungeoneering, there are fewer bots that can actually level these stats up effectively. Most bots that are actually able to level these skills are quite expensive and not always up to date. These tasks are not exactly as easy as banking items or gold.

Bots are especially effective at farming gold on characters with leveled skills and fighting stats. Bots can farm very high level mobs 24 hours a day man make huge profits by automatically selling or even crafting and then selling the loot for maximum income. – If you ever asked yourself how people are able to sell Runescape gold cheap, this is why. 99% of all gold seller are maintaining armies of bots farming money 7 days a week and it works.

Hacks are not as useful in Runescape as it is in other games. The very commonly used hacks like speed, ESP and wallhacks are not as useful here and that is why hacked clients are more focused on farming. Most hacked clients include some sort of auto clicking (bot) or autolooting. However, since hacks can potentially get detected, it is not recommendable to use hacked clients if you have any access at all to a bot. Bots do not inject or change any game code and are a lot saver for that very same reason. Other than auto-clicking, hacked clients will often show you a lot of information that the normal user interface would not show you. So there can be a lot of usability in using hacked clients and experienced players might find it useful, but consider the risk that comes with using them. 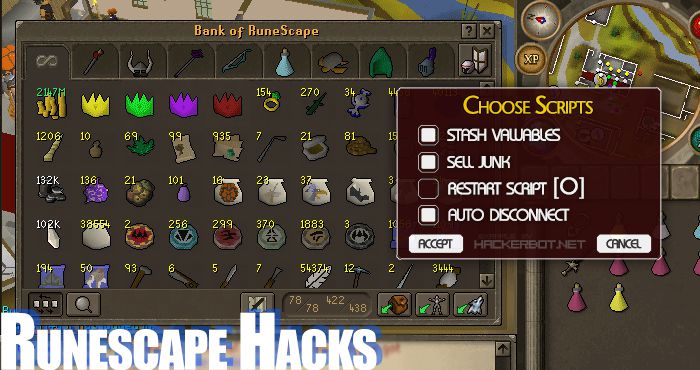 An exploit is a temporary bug in the game that can be used to gain an advantage. Examples of Runescape exploits are: Mobs that give more XP than they should, dupe exploits, lag exploits, trading exploits, too much / too high quality loot or increased loot drop rates. The most loved and feared kind of exploit is the dupe that usually is achieved by performing multiple actions on the same item, resulting in a duplication of the item. Lag can also be used quite effectively in most MMOs to achieve glitching of items or even stealing them from other players. Runescape has a long history of bugs and exploits that have influenced the economy, but most of these are patched quite quickly and their damage to the economy y is often rolled back.

Hacking values such as your Gold (Money) or Health (HP) or inventory is not possible. Why? – Because in any MMO some values are processed on your computer and some on the server of the game. Now obviously we can change values that are processed on our own machine, but not the ones that are stored and processed on the Runescape servers, since we have no administrative access. Now most values that are processed on your computer are not too interesting, since the really important values are handled on the game servers for obvious reasons: If players were able to change their gold, health or items, the game economy would crash, the game would cease to be a challenge and interesting and the game would simply die. And that is why the developers wisely decided to not let us change our HP and Gold in order to keep the game running and that is also why we cannot possible hack these stats. – Now there are people with fake videos out there that will tell you otherwise, but be assured that no matter how many surveys you fill in, you will never actually get a God Mode or Gold Generator for Runescape.