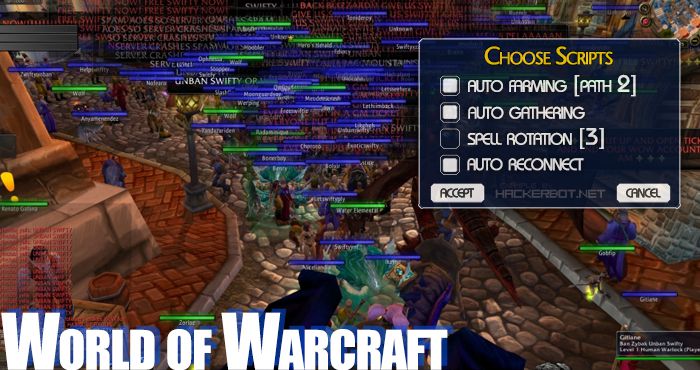 Are there ways of Cheating in World of Warcraft?
Yes, there are. The most common way of getting an advantage is to use software in order to farm and perform certain tasks automatically, also called botting. There are also some other more specific scripts and even client hacks, but those are far less common. However, there are NO gold hacks, god modes, item adders or anything alike.

There are many possible ways to cheat in WoW that are currently being used or have been used in the past. There are hacks, such as speedhacks, radar hacks and similar cheats that are being injected into the game. There are exploits that are mostly temporary and can allow for things as duping, unlimited experience and gold farming and similar things. Exploits are usually patched a few weeks after being discovered. The last and probably most used way of cheating in World of Warcraft is botting: That means using computer scripts to automate certain tasks such as farming money and experience, fishing, crafting, enchanting, gathering, buying and selling on the auction house, looting items, raiding and questing. Bots are the most save and effective way of cheating in WoW as of now.

As in most MMORPGs cheating has become a part of the meta. Most serious players in World of Warcraft are using some kind of script, bot or exploit to save time, be more effective in their grinding or simply have an advantage in PvP. Most hackers never get caught, since they are using paid bots or hacks and those are especially hard to detect and ban. There are players in WoW that have been cheating for 5+ years now and have amassed such incredible wealth that they can actually make a living from selling some of it. 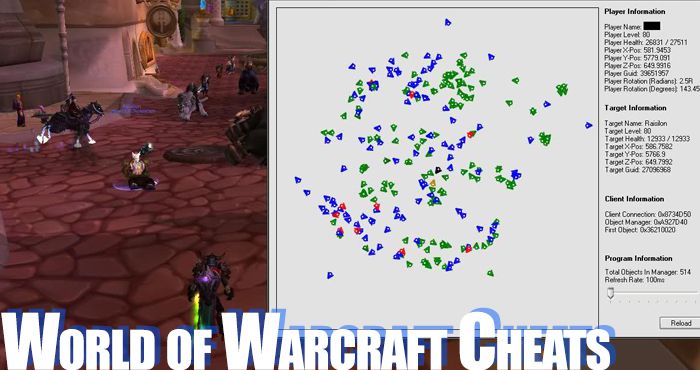 Bots are programs that will take control of your character and do certain preprogrammed tasks in order to save you a lot of time. Bot scripts will read your PC memory (ram) and read your location in the world (coordinates), then they will use that piece of information among others to navigate the world, attack mobs, loot, craft, enchant, fish, quest and do other repetitive tasks. Bots are very effective to level up characters in a short time and to farm money you can then spend on gear, pets or mounts ect. Bots will usually make the PC they are used on, unavailable for other tasks: So if you want to farm 24/7, then you will have to have a dedicated World of Warcraft bot grinding computer.

Bots can be programmed to do almost anything. Especially since there is almost no dodging in WoW, bots are quite effective and can do most tasks just as effectively as a human being could. However, bots do run into problems when it comes to PvP and certain raids. A bot is a script and cannot think like a human being, cannot come up with strategies, and will lose to any human player with experience in PvP.

Bots are very effective when it comes to making gold (money). In World of Warcraft. It is more than likely that at this point over 50% of the money in the WoW economy has been produced by bots. Bots can buy and sell from the auction house, they can craft, mine, enchant, craft jewels, tailor, cook, work leather, fish, forge runes and a lot more. They can perform almost any professional skills and help you to max them out and make money off of them. – The most famous bot when it comes to professions is probably the fishing bot that is pretty popular in WoW and can be a constant source of income. 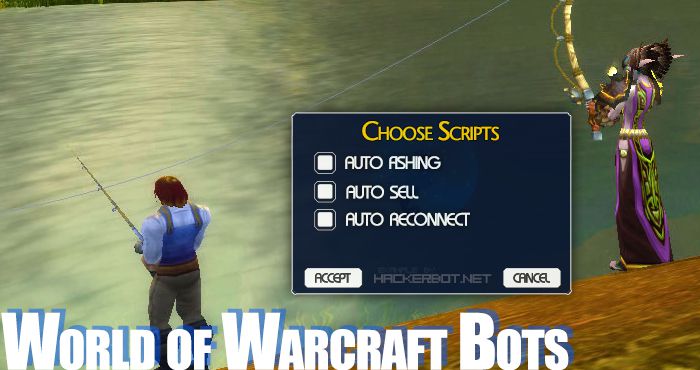 Hacks are pieces of code that is injected into the game client (game program running you your PC) edit the way the game works or add certain functions to the game. Examples of this are wallhacks or radar hacks. A wallhack will give you the ability to walk through walls and radar hacks will make enemies visible through obstacles and give you a huge tactical advantage. There are also hacks that can teleport you, make you fly or jump really high or increase your walking speed (speed hacks). Even though hacking in WoW is certainly still possible, people are doing it less and less, since using bots is a lot more effective. Positional advantages are not that useful in the PvE of World of Warcraft and since the game is very much centered around the PvE and grinding, hacks are very hard to find right now. The only place where hacking is still viable is the PvP.

Another reason why hacking is not all that popular in WoW is that people will notice that you are cheating quite quickly, if you are walking through walls and flying around. When it comes to the danger of detection, bots are a lot saver a well, since they do not inject any code into the game and are not all that obvious. 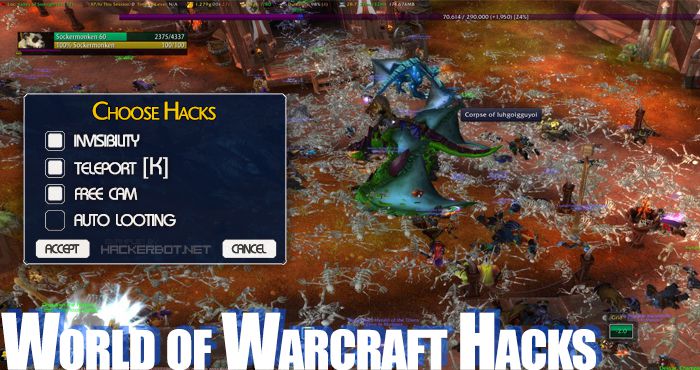 There have been a lot of different exploits in the history of World of Warcraft. The most famous or rather infamous of all exploits is the duping exploit: A duping exploit (aka dupe) will allow you to duplicate items and can potentially ruing the economy of an MMO. Duping and other exploits are often found by accident and are mostly related to lag or performing multiple actions at once. For example: Depositing an item and using it to craft at the exact same time in combination with lag can potentially lead to both actions being performed and a successful dupe. Some dupes are exploiting glitches due to lag and are hard to patch for the developers and other dupes are exploiting a fundamental error in the code of the game.

Other exploits use more obvious bugs in the game like mobs that give too much experience or are dropping items they are not supposed to drop ect. These kinds of exploits are often found by very dedicated players after new content has been added to World of Warcraft (expansions ect) and are usually patched quite quickly after people report the bugs in the forums. 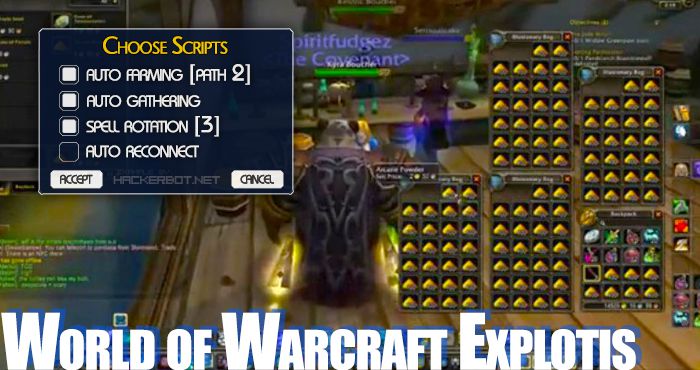 We really recommend using bots in World of Warcraft, since the game is very much based around grinding and spending time doing repetitive tasks. In this respect World of Warcraft is even more hardcore than most MMORPGs: Some items have insanely low drop rates - you can spend years grinding without getting them and there really is not that much else to do in the WoW endgame. Bots pretty much take care of the grinding for you allowing you to spend all those thousands of hours you would have spent trying to get that one items with the really awesome numbers on it. We are not looking to insult anyone who spends a lot of time on WoW, but objectively speaking most of the grind in WoW is quite boring and time-consuming and it is our belief that this time could be spent doing things that have actual meaning. Bots give you the best of both worlds: You get to enjoy having an actual life and you also get the best items and a fun time from World of Warcraft. 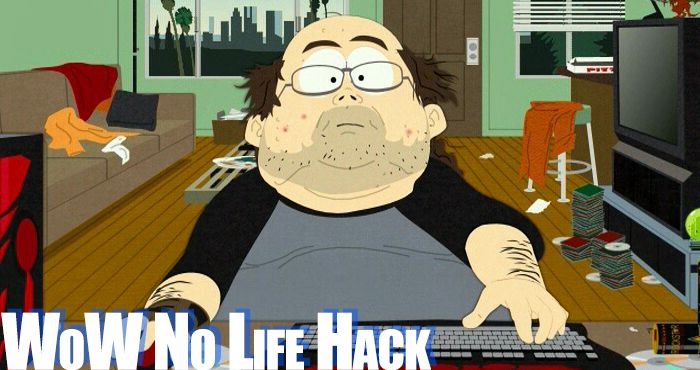 There are a lot of people out there in the depths of the internet and to protect you from being scammed, I will now explain to you how MMOs work when it comes to important values such as Health or Money: Some values in an MMORPG are processed on your PC and some are processed on the servers. Obviously, we have no means to change values processed on the Blizzard servers, but we do have access to our own computer. Problem is that very important values such as our money or health and items are not processed on our PC and thus cannot possibly be changed by any hacks or cheats. Today there are simply no MMOs left that are primitive enough, not to process currency and health on the client side. So I urge you not to fall for people offering you “God Mode Hacks” and “Item Generators”. They are mostly just editing videos to look like it works, when it really does not.