Is it possible to cheat in Aura Kingdom?
As in almost every online multiplayer game, it is indeed possible to gain an edge over other players using some programs and automated software. There are bots that are able to farm automatically to get you experience, gold, tokens and so on. There are also hacks that will help you in PvP, allow you to travel faster and so on. However, there are NO cheats that allow you to get Money, AP or levels directly in Aura Kingdom.

Cheating in Aura Kingdom may seem incredibly difficult at first, but when you start to think and examine the game and its mechanics more closely, it suddenly becomes obvious that it is not only possible, but pretty easy. While there are certainly no programs or hacks that can get you unlimited money, aeria points, items or health ect, there are ways to achieve huge advantages: The most popular method of cheating in Aura is definitively the use of bots or automated playing / farming software. Bots are able to take control of your character, farm mobs, complete quests, sell items, level up you and your eidolon, collect tokens and so on. While the sue of bots or scripts is literally possible in any MMO out there, Aura Kingdom features auto pathing options and auto potion options that make it much easier for bot developers to get a program to far for you. Aside from that there are hacks that will allow you to walk through walls, teleport, auto loot, extract information about other players and so on. However, hacks are mostly used in PvP, since they are generally not all that useful in PvP and more of a risk to use there. Last, but not least: There are exploits and smaller optimizations that you can make. For example to always be in a group to get bonus XP. Exploits (bugs in the game that can be used to one’s advantage) do appear from time to time and are very temporary, but sometimes extremely powerful. There have been exploits that have literally allowed players to dupe (duplicate) items, farm mobs infinitely, get insane drops from common mobs and so on. While this sound extremely attractive, most of these exploits will get patched as soon as the information gets public and we recommend you only use private exploits to avoid any uncomfortable consequences. 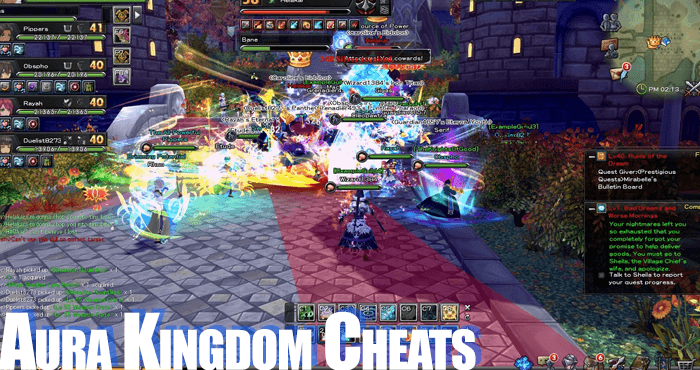 Bots are by far the most often used means of cheating in any MMORPG including Kingdoms. A bot is a program that is created for the sole purpose of automating tasks in a video game and since most modern free to play and paid MMOs feature lots of farming and grinding, they are in fashion. Bots essentially allow you to save a lot of time by having your PC play the repetitive parts for you and grind out all the money, the levels, the quests and so on. This allows you to play the game for fun instead of progression. The software that makes up the bot itself is undetectable, which is why this kind of cheating is practiced that widely in Aura Kingdom. However, advanced detection software will still be able to detect bot users that are abusing the bot. Never ever should one run a bot for too long at once (16h max), never should one use the default settings or paths, since those will be used by many others and put you at risk of detection. For those who know how to use this advanced automation software, it is a huge timesaver and will allow them to farm up to max level in under a week without even having to play a single hour. The use of this kind of “exploit” is not as extreme in AK, since the game is not all that bad of a farming fest and therefore the use of such tools is much less likely to get you punished than in other similar online games.

Is it legal to cheat and will I lose my AK account?
It is of course allowed to cheat in games including online games. – Always has been and always will be. However, the developers (X-Legends) are free to ban anyone player from their service for any reason they want. – So it is recommended that if you are cheating, you do so in secret and do not brag about it or use cheats to annoy other players.

How much do cheats cost for Aura Kingdom?
Your average bot or hack for most online games will cost you around 10 to 20$ per month in order to ensure that you have a dedicated team keeping the program up to date and undetected. However, prices will vary depending on the developers.