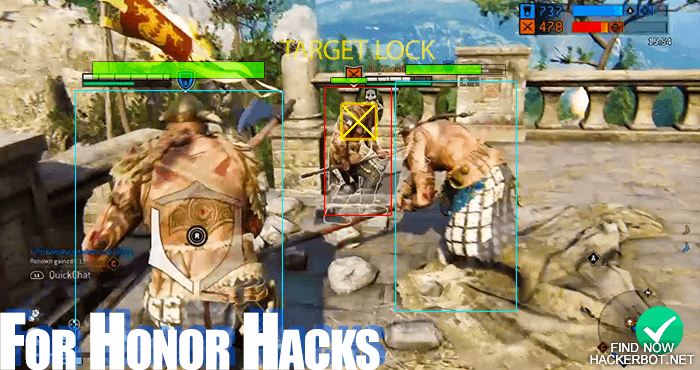 Is it possible to cheat in For Honor?
Yes indeed cheating is possible. Auto Action Scripts can be used to automatically dodge attacks, counter attack, go into guard stance ect. Scripts are kind of the Aimbot of fighting games and Hack and Slash games. There are also certain Hacks at the moment that allow for speed increase (speedhack), warping, minor teleports and map clips, but Auto scripts are actually what you want. Auto dodge and auto block scripts being the most popular that allow you to automatically block and counter any attack at the holding down of a button/key. Cheating is possible on all platforms including PlayStation 4, Xbox One and Microsoft Windows PC.

Hacks in the conventional sense aren’t the most powerful cheat to use in For Honor at this time, since this is an online hack and slash PvP game and all the important player data, such as your steel (money), your cosmetic items, gear, level, unlocked characters ect are stored on the Ubisoft servers and cannot be hacked. – With other words there are no God Mode cheats, no unlimited money, no character unlockers and no free gear boxes to be had.

However, hacks can still make any enemy or minion in all modes visible to you through walls, called the “wallhack” (because you see through walls). And hack can be a good platform to run “scripts” that are the actual powerful cheat in For Honor. These scripts can then allow for automated actions, such as auto block, auto counter, auto attack ect. Code manipulation can also allow for auto aiming of abilities, which can be slightly useful, but is not necessary by any means.The downside of doing this through code injection into the game is that it is inherently detectable by anti-cheat software. So be careful what you download and from whom. Hack can potentially be run on consoles and pc, but will be easiest to use on computers. 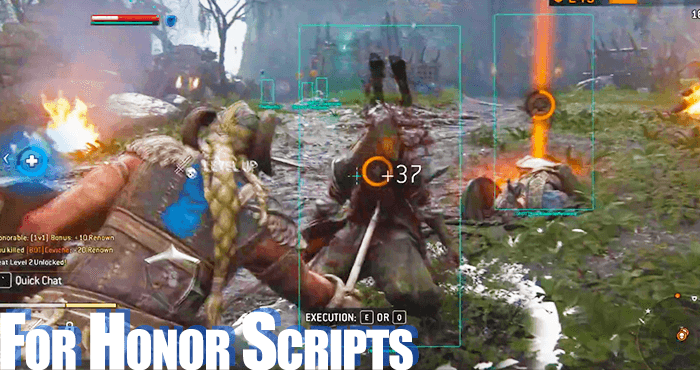 Automated user input is arguably the most powerful cheat in For Honor available out there: Since the PvP is incredibly skill based, based around knowledge of each character and how to use their combos and how they fare against other heroes. While no bot or script can learn all the knowledge, they can augment player reaction time by automatically performing actions such as blocking / parry attacks, using abilities such as heals, throwing people off of cliffs automatically, auto attacking and auto dodging. While no AI will ever compare to an actual good human player, they are tools that can give you literally super human reaction times that are only limited by your ping.

On PC macros and scripts can be easily created using macro editors, macro programming tools and can easily be run to read the game memory and generate user input. On Xbox One / PS4 one requires either a packet editing proxy or a hacked console that is able to run unsigned code. Aimbots can also be used in for honor on some characters. 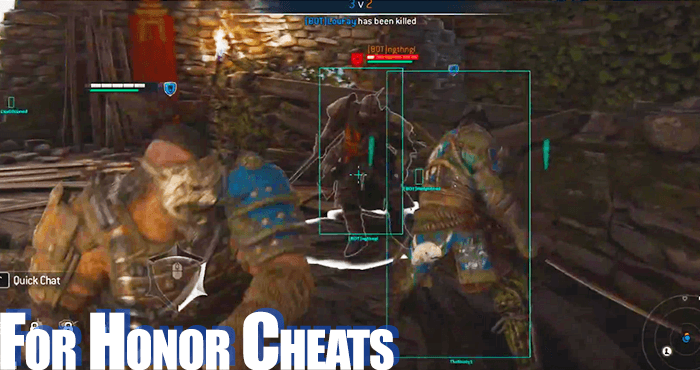 What is a For Honor Script?
A script is essentially a “mini bot” that will automatically trigger actions, such as abilities, blocks, stances, swings, dodge moves, grabs, counter grabs ect if certain conditions are fulfilled. As an example a script could read the game memory of your PC/PS4/Xbox One to detect if your opponent is swinging at you and automatically trigger the appropriate block and counter attack. It’s a good augment of reaction time for those who are challenged in that regard.

Are there any Hacks for Unlimited Steel, unlocking Classes, God Mode and Free Boxes / items?
For Honor is an online multiplayer action game and therefore most of your account data, such as your items, cosmetics, your XP, your Steel (Money), gear and son on is stored on the Servers belonging to Ubisoft (the developers). – Data stored on these server cannot be hacked in any way. While in single player games, this is possible using software, such as Cheat Engine, this is not the case for online games like For Honor.

So with other words, there is NO unlimited health hack, no unlimited stamina, no prestige hacks, no free steel or free boxes generators and so on, because achieving these kinds of exploits is not possible. Anyone offering you impossible cheats should not be trusted, as they are most likely trying to trick you into filling in surveys and alike.

Is Cheating legal and will my account get banned?
Cheating is using any kind of software is completely legal, if a bit frowned upon by the community. Try not to annoy anyone and use your cheats to balance teams, because you are a good person. However, Ubisoft has the right to ban anyone from their games, which is why we recommend undetectable paid hacks over free download.