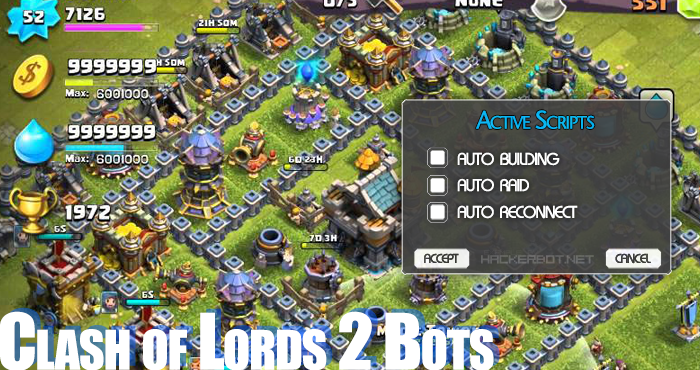 Is it possible to cheat in Clash of Lords 2?
While there aren’t any powerful Clash of Lords 2 Hacks, software can still be used to automatically build your base, raid other players, do arena battles automatically, spend your rings and EXP cards to buy and level up heroes and generally play your account for you to get the most progress possible. This kind of automated farming and building software is called a Clash of Lords 2 Bot (robot). There are also some very minor hacks and exploits, but there are no unlimited gold or jewel hacks of any kind. Neither are there god modes or ring adders, epic hero generators and so on.

Clash of Lords Mods and Hacks

Since there is no way to add resources, jewels, rings or heroes directly to your account, the use of automated playing software is the best way to max out your account and heroes without having to play CoL2 every day and spend endless amounts of time. Clash of Lords 2 Bots are able to automatically log into your game, do raids automatically, search for bases you can invade easily and that have lots of gold mines and vaults for maximum gold gain, bots are able to automatically level up your heroes, do arena battles for additional rewards every day and even to do campaign clashes automatically. Bots are the most effective way of maxing out your account, get all the epic heroes and the best mercenaries available. CoL2 Bots also allow you to save some money, but if you want to support the developers and for the game to get better, we still urge you to spend some money on the game to help the developers. There are all kinds of mods and hacks for Clash of Lords that can be downloaded online. How risky is it to use Clash of Lords 2 Hacks and Bots?

Generally the use of auto playing bots in online mobile games is not very risky at all, since bots, as opposed to hacks, do not inject any code into the game app on your device. The bot merely reads the game state and automatically generates user input to play the game for you as you would and there really is not any substantial difference, since mobile games, including Clash of Lords 2, are relatively simplistic. Another reason why the use of cheating software in CoL2 is relatively low-risk is that due to the fact that most bots require rooted mobile devices, there are not yet a lot of people actually using this software and that low volume of cheaters in Clash of Lords 2 leads to very little need to take action on cheaters from the developers (IGG). Are there any Gold Generators, Hero Hacks, Ring Adders or God Modes?

CoL2 is an online mobile game, which means that all the important account values are not stored on your device, but on the game / facebook servers which cannot be hacked using any legal means. – While in single player games it is indeed possible to hack money and unit health, unlocks ect, this is not the case for online games. If it was possible to get Clash of Lords 2 Hacks that give you unlimited Gold, Souls, Rings, Mystic Crystals, Mugs, Jewels, Hero Shards, Mutagens and Health for free, then everyone would use this hack or generator and IGG would stop making money from the game and the game would simply cease to exist. So the fact that the game exists, proves that this kind of program does not exist. Anyone claiming to have this kind of cheat software is trying to scam you into filling in surveys or downloading viruses.

This applies for all devices that Clash of Lords 2 can be played on: It is true for iOS, Android, Facebook and Windows alike. The only thing that really changes between the platforms and devices is the code and cheat provider, the possibilities stay the same.

Is it legal to cheat and will I get banned if I do it?
No, cheating in games has always been legal and will always be legal in every country in the world. However, IGG.com do have the right to ban any user of their games, including Clash of Lords 2, from their services. – For this reason we do urge people looking to cheat in CoL2 to use software that is of the highest quality available and that is 100% updated and undetected at all times and on every build and update of the game. Using outdated CoL2 Hacks or Bots can lead to detection and even bans.