Is it possible to cheat in Boom Beach?
While there are not any Boom Beach Hack with a great impact, it is still possible to cheat using automated playing and farming software, called “bots”. Bot are able to play the game for you, attack bases, build your base, farm gold, wood, stone and iron automatically to build troops and buildings for you. However, there are no generators or adders for unlimited resources and diamonds of any kind. After all this is a mobile multiplayer online strategy game and all important data is stored on the Supercell servers.

What is the best way to cheat in Boom Beach? (Mods and Hacks)

At this time the use of bots or robots (auto playing software) is the best way to cheat in BB on all mobile devices. Bots are essentially programs that are able to automatically play the game for you, build your base according to scripted plans, attack players and Blackguards, build your army, upgrade your buildings and Headquarters and take resources from resource boats automatically. Usually the bot will wait until all timers are at 0 and then take whatever actions that are needed to progress further into the game as fast as possible. Bots can be configured to either focus on base defense or attacking players (pvp) to gain resources. Advanced Boom Beach Bots will also be able to analyze enemy players bases and find the best way to deploy landing craft and troops to do the most damage and farm the most gold, wood and stone. At this time the use of such auto play programs is the best way to cheat in BB. 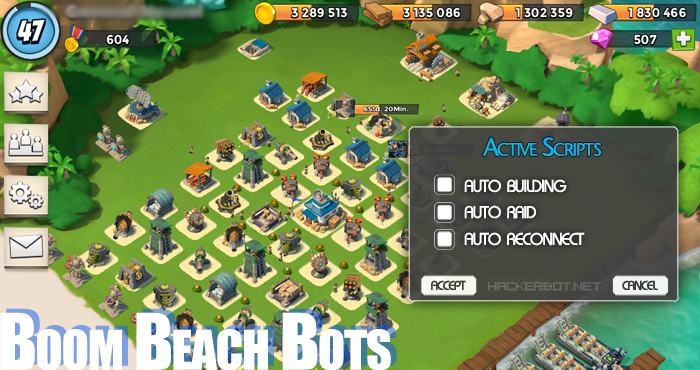 How risky is the use of Boom Beach Bots and Hacks

Since there are almost no legitimate Boom Beach Hacks, their use is extremely dangerous if you do not like to get scammed into filling in surveys or downloading fakes or even malware. The use of bots however, is relatively safe, since bot detection of mobile devices is almost impossible at this time, since not many people use them and the games they are used in are incredibly simple when it comes to game mechanics. The only thing you need to look out for when using software to bot Boom Beach is that you do not leave it running for too long, since no human is actually able to play a mobile game for 16+ house very day and eventually those stats may be used to get rid of some of the cheaters. Also make sure you spend a little money on the game to support the developers, help Supercell to keep the game running and minimize the chances that game mods would want to get rid of your account. 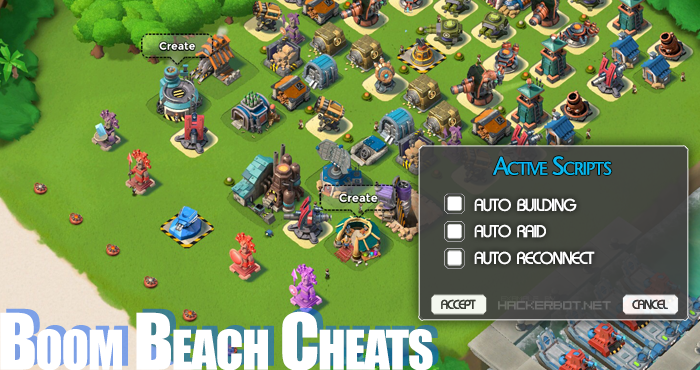 Are there any Boom Beach Gold Hacks, Resource Generators and Diamond adders?

No, there is absolutely no way to gain resources, diamonds, upgrade your HQ to 20 or get a god mode (unlimited health) for your units. – This very vital data is stored on the actual game servers that are being managed by Supercell and is not stored on your phone/mobile device and therefore cannot be hacked using any legal means. Anyone that is telling you that they have any kind of tool or generator that achieves those thing is trying to get you to fill in surveys. If it was possible to get unlimited health of money using a free tool, then obviously everyone would do it and Supercell would stop making money and the game would be dead within a few weeks. – So the simple fact that Boom Beach is still a game that exists and is being played, proves that this kind of cheat is simply and sadly impossible. Don’t believe me? Fill in those surveys and feed the trolls, find out for yourself.