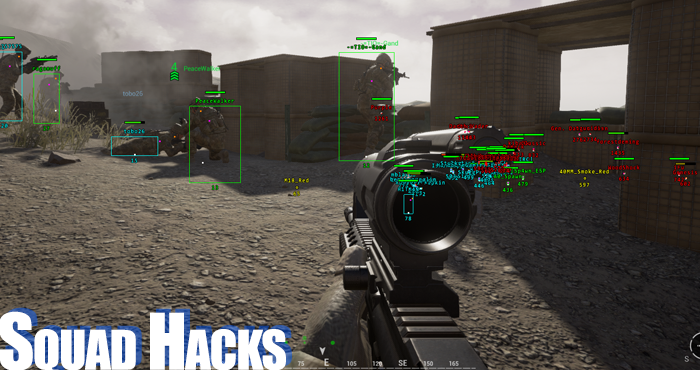 Is it possible to cheat in Squad?
Yes indeed it is possible to cheat in this game just like it is possible to cheat in most tactical shooters: Aimbots allow you to automatically aim and shoot your weapons to get your team ahead and eliminate the enemy as soon as they are in line of sight. For enemies that are not in direct line of sight, Wallhacks are tools that can even make those visible that are hiding behind terrain. These are the main cheating methods, but there may also be the one or other minor exploit or hack for no recoil, no bullet spread, teleporting or walking through terrain (noclip) once in a while.

What is the best cheat to use safely in Squad?
What makes tactical online multiplayer shooters like Squad, ARMA or DayZ very unique in terms of cheating is the average age of people playing the game: As opposed to more casual shooters, players in Squad on average will be adults with a lot of experience playing shooters and therefore the chances of you getting called out for using Squad Aimbots or ESPs is a lot higher and therefore it is vitally important for you to be polite, cooperate with your team, restrain yourself from mindlessly aimbotting and using customization methods in your aimbot software to make your aiming movement seem more fluent and natural. As for efficiency there is not all that much of a difference between using auto aiming software and ESP hacks (wallhacks), since both will give you a huge advantage. The only real difference really is that using ESPs is more fun, since you still get to aim and shoot manually and the tactical advantage you (and your squad) gain is incredible. The use of aimbots Squad is a bit more expensive on average and not as much fun as in other shooters, since most of the fun is the realistic simulation aspect of the game. In what situation is it morally ok to use a Squad Aimbot?
As always we discourage the use of cheating programs of any kind to live out any power fantasies you might have and to dominate other players. We recommend that you tread your fellow players and opponents in Squad with the utmost respect and only use cheating software in situations where teams are unbalanced or you are trying to find a specific player to get revenge for your buddies.  Help new players, balance teams, use in moderation to get some easy score, but to not be one of those hackers that just terrorizes the whole server. No one likes these kinds of cheaters that they (thanks god) do get banned sooner or later, as they should. So: don’t be a dick with other words. 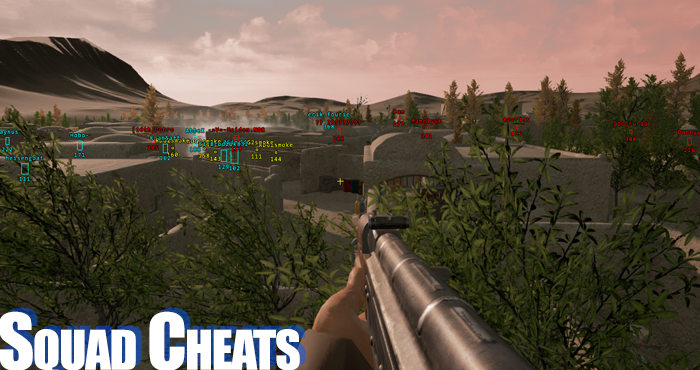 How do Squad Wallhacks and Auto Aiming Tools work?
In order for the game to be fair for everyone an in order for every player to be able to shoot any other on the server, big parts of the map have to be stored on your GPU (graphics card memory) at all times. Hacks basically scan that memory for specific objects (mostly players, rally points, bases ect) and then either highlight those objects or automatically aim your weapons at them and shoot them.

Other hacks like god modes (unlimited health), unlimited ammo, changing of class, unlimited stamina and so on are sadly impossible, unless you own a private Squad game server. These values are not processed on your machine and therefore unhackable. What is the best class to use hacks on?
The use of aimbots is very effective on the Marksman obviously (DMR or Sniper Rifles) and is quite useful for assault rifles as well, even though their accuracy is much worse than in your average online shooter. Wallhacks are probably most useful if you are a leader and trying to navigate your squad into an advantageous position and is obviously quite useful for all gun wielding classes as well, since it makes shooting Americans, Russans, Insurgents and Irregulars so much easier if there is a red box around them, lighting them up on your screen. Especially useful is the fact that Wallhacks will allow you to easily find enemy Rally Points and destroy them, giving your Squad and team a huge tactical advantage.

Is it legal to cheat and will my Squad account get banned?
Cheating in video games including First-person shooters like Squad is entirely legal all over the world. However, Offworld Industries, Steam and other Publishers of Squad have the right to ban anyone from their games and services that they chose for no reason at all. Therefore it is recommended that if you should decide to use Squad Aimbots or hacks, that you use cheating software that is 100% up to date and kept undetected at all times. Using low-quality products that are open to the public often leads to account bans within hours and is not necessarily worth the risk.