Is it possible to cheat in Armored Warfare?
Indeed cheating in Armored Warfare is just as possible as in other online tactical tank games: It is not only possible to see enemies through terrain over huge distances using Wallhacks, but it is also possible to automatically aim and shoot your turrets and shells using auto aiming software also referred to as “aimbots”. Both these cheating programs are extremely efficient and allow you to farm credits (money) and reputation faster than you ever could using conventional game mechanics. However, there are no Armored Warfare hacks that can add unlimited gold, credits or reputation directly to your account. However, there may be farming bots for this game in the future.

Is it legal to cheat and will my game account get banned?
Cheating in video games, just like in offline games, is entirely legal even if you won’t make a lot of friends among non-cheating game participants. However, even though the use of cheating software may be legal, Obsidian Entertainment and My.com still do have the right to ban any player from their games and services for any reason. – For that reason it is highly recommended that, should you decide to use cheats in Armored Warfare, you use software of the highest quality available and a product that is constantly updated, 100% undetected and offers options to hide your cheating activity. 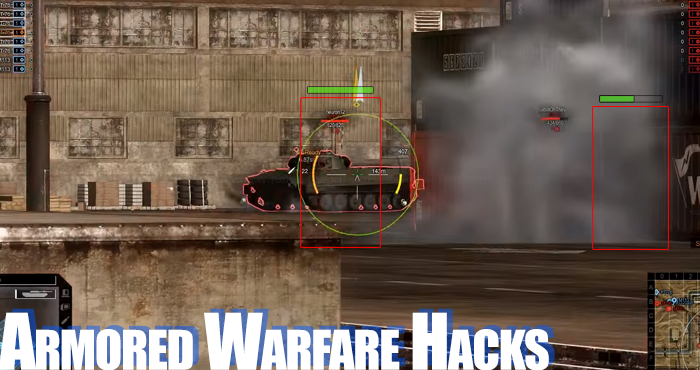 What are the best cheats for Armored Warfare?
The best kind of cheat in Armored Warfare is without a doubt the aimbot: Automated aiming software will allow you to aim incredibly fast at any tanks that you have line of sight on, do the maximum damage with the ammo you have and advanced Armored Warfare Aimbots will even offer the option to aim for specific weak points in specific tanks armor. Aimbots will either detect the penetration of your ammunition or you will have to enter it manually and then calculate the ideal spots to aim for to do the most damage. Cheat auto aiming tools for AW will not have a function to wait for the crosshair to focus before automatically firing a shell, which is another reason to use quality software. Wallhacks are still quite effective in Armored Warfare, but they are nowhere near as powerful as automated aiming programs, but since they are usually a bit cheaper, they may still pack enough bang for your buck. 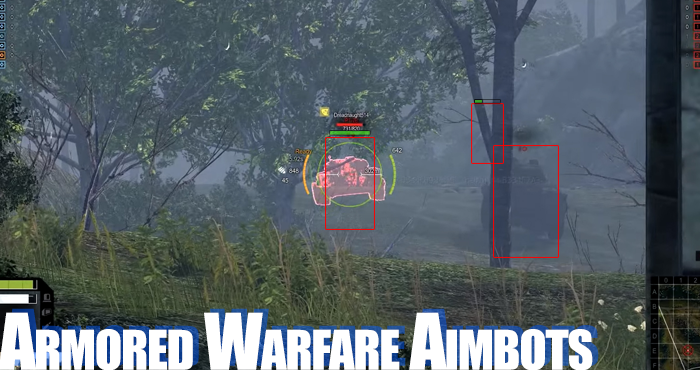 How do I use Armored Warfare Cheating Software safely?
Most important: Don’t be a prick! Never use cheats to simply dominate other players, flame and shame them and just generally to annoy people. Not only is that less enjoyable for yourself, since you will soon be bored for lack of challenge, but it will also get you reported and banned quickly (as it should). Hackers that use their “skill” to dominate people are making a bad name for online game hacking everywhere and we do not in any way condone this kind of anti-social behavior. Instead try to use your hacks to help new players, turn around an unbalanced match when matchmaking systems fail your team and just generally to help instead of annoying. Be nice and respectful and you will not only make more friends, but also minimize the risk of getting your account manually reported, reviewed by a game mod and banned from the game. Are there any Armored Warfare Gold Hacks, Unlimited Credit Adders or Tank Unlockers?
Sadly none of these cheats exists: Unlimited Money, Unlimited Health (God Mode), Unlimited Gold, Unlimited Reputation, Vehicle, Upgrade and Module Unlockers do not exist and anyone that is trying to get you to fill in a survey to get these “legit hacks” is scamming you. Sadly enough if you want to get the best tanks in the game like the Abrams, T-90, XM8, LAV-600, Leopard 2A5 ect, you will have to farm for quite a bit. Even using cheats will not skip that grind entirely. The problem with these kind of Hacks for Armored Warfare is that these very fundamental account values are not stored on your device, but on the game servers owned by Obsidian and My.com, which are entirely unhackable. – And even if you were an IT engineer and were able to hack into the game server, that would still be highly illegal and can easily get you to prison (no kidding). So unless you know a game admin, forget about these kinds of cheats.