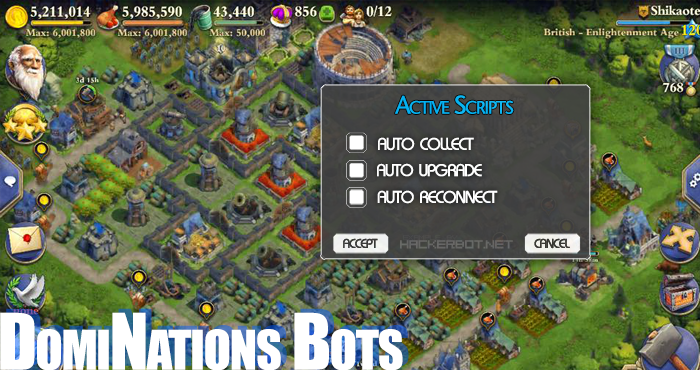 Is it possible to cheat in DomiNations?
Yes indeed it is possible to cheat in using several sorts of programs and techniques as in most strategy game apps out there: Automated farming software or “bots” can be used to automatically build your buildings, upgrade and build troops, automatically complete missions, pvp, automatically hunt, collect gold and farms from mines, farms and other buildings. There are also some very minor hacks and exploits that do crop up here and there, but are incredibly temporary and rare that may allow you to get crowns and gold / food more than you usually would get through using bugs in the game to farm bugged missions ect. However, there are no hacks that can add infinite gold, crowns or food to your account.

As sadly there is no way, be that hacks or exploits, to directly add resources or money in the form of gold, food or crowns to your account and neither is there a way to change your research, troops, medals ect, the best way to cheat in DomiNations is the use of automated playing scripts or bots.

Bots are able to automatically farm missions and players for maximum food. Bots in that case will try to get as many resources as possible, expending the least amount of troops and will try to keep your medal rating low (chopper usually) in order to make farming and defending easier. DomiNations bots are also able to automatically upgrade buildings, build according to prescripted layouts, do research automatically, auto hunt animals, such as bears, deer, stags ect for even more resource. Also since wild animals respawn relatively quickly, it is one of the best things to bot for additional resources. The only thing that a bot is unable to far for you are crowns (except for quests). Crowns will still have to be bought for real money and that good, since it allows the developers to improve the game and keep it going. Mods are also used on both Android and iOS to cheat in DomiNations. 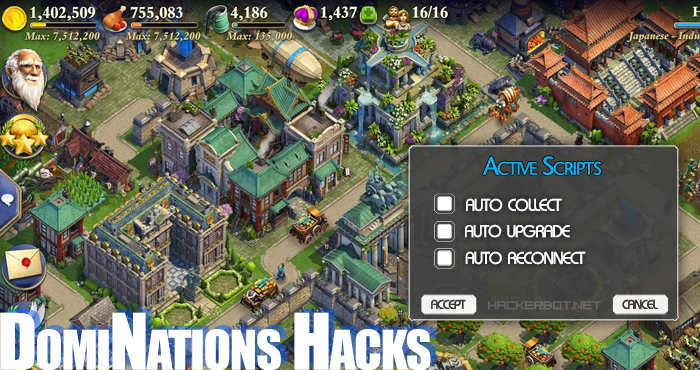 Is there a way to get unlimited troop health, gold, crowns, tech, food ect?

While in single player games and apps this kind of cheat is certainly possible, that is not the case for multiplayer strategy games and mobile apps. And since DomiNations is an online game app, all your account data is stored on the Nexon game servers and not on your device where it would be hackable. So there is absolutely no legal or easy way to hack your gold, food, crowns ect and if there were, everyone would be using it and the game would stop making money and die.

Do please, do not trust people that offer you fake hacks, generators or tools to add gold, crowns or god mode to your account, since they are all trying to scam you into filling in surveys or downloading malware. On the internet if something sounds too good to be true, it is certainly not true. 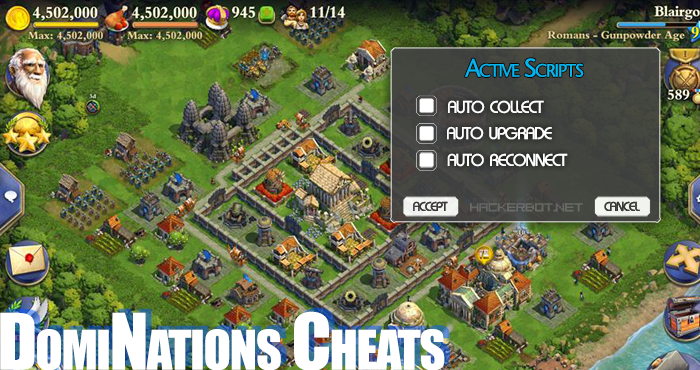 Is it safe to use cheating programs and apps?
In mobile game apps on iOS and Android it is still pretty safe to using bots and minor client-side hacks to cheat, since anti-cheating software is not very advanced on mobile phones and tables as of yet. However, you should still not be running your farming bot for DomiNations for more than maybe 12 to 14h per day, since no actual human player can play the game that long. Playtime is the easiest way to detect bots and if Nexon should ever want to ban bots, they will certainly use that statistic. Other than that simply do not brag, get quality software, do not use hacks and you will be fine. The methods and risks are all the same for any platform be that Android or Apple devidces and any kind of OS. Also the fact that most cheating software does require rooted phones, dies make cheating a lot less popular and therefore makes detection ever less likely, as it limits the number of people that do it significantly.