Can I cheat in Heroes Charge?
Yes cheating is possible in any mobile game and online game including Heroes Charge: It is possible to have software automatically play the game for you, battle automatically, level up and evolve your heroes, farm for gear and gold ect. These bots can use your stamina effectively for maximum farming all day even when you have no time to play the game. However, there are no hacks that can get you unlimited gold, gems or unlock heroes directly. There are also some very rare exploits, such as dupes or leveling bugs that pop up once in a while and will usually be patched within weeks or months. Unlocking VIP content or heroes however is not possible without actually supporting the developers by spending money.

Which is the best Cheat for Heroes Charge?
If it was possible to hack values on the actual HC servers, the most powerful hack would certainly be a hack that added unlimited gems, gold, stamina to your account and unlocked and leveled all heroes. However, since it is sadly not possible to hack these values, as they are processed on external servers, the most efficient cheat for Heroes Charge is the use of automated bots for iOS and Android that will play the game for you, farm gold, spend your stamina consistently, do campaign missions, time rifts, trials and even booty caves automatically for you to auto farm gold, hero experience and slowly grind out your hero levels, skill points and gear. So using Heroes Charge Bots is by far the most popular and efficient cheat that can be used in the game. However, bots will still not allow you to get higher VIP levels and therefore unlock exclusive heroes and other desirable items. So you won’t get around supporting the games developers by using any kind of cheat. But bots are a good way to max out your heroes and unlock new ones automatically and generally progress through the game quickly. 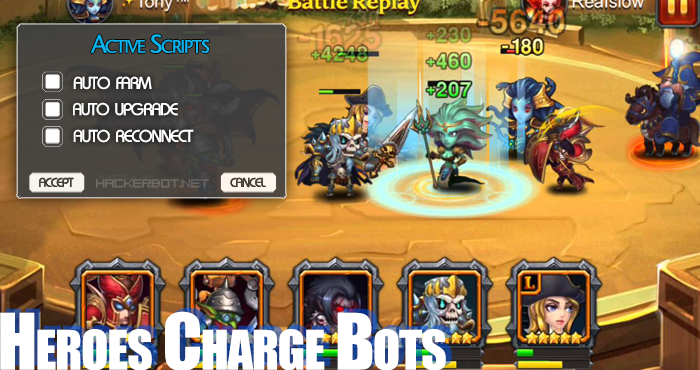 How do Heroes Charge bots work?
Most bot or script apps will require a rooted phone / mobile in order to work, since they have to have permission to access another app on your device to then read the memory state of the app and generate input from that automatically. A bot will essentially read the game state of the Heroes Charge app on your phone or tablet and then automatically use the game interface in order to perform certain actions like doing campaign missions or farming pve battles until you are out of stamina. Bots can also equip your heroes with the best gear available by searching your inventory for higher rarity items like orange items (legendary). Bots can be configured to fight in certain ways or use certain heroes according to the play style you chose. 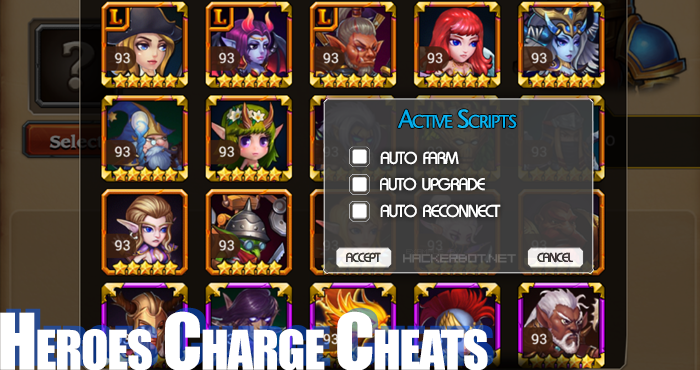 Is it save to cheat in Heroes Charge?
Avoid anyone that is offering you god modes for heroes, unlimited gems and gold coin hacks, money adders and so on. These are impossible and therefore anyone trying to get you to fill in surveys is not really in possession of any actual hack or other program.

As for the use of HC bots it is very safe, since botting is not very widely used in mobile games and therefore developers like uCool have not yet come up with sophisticated anti-cheating strategies. The only thing you need to watch out for is that you don’t leave your botting script running for too long. Usually 16h per day is the maximum for any average mobile bot. This is simply for the reason that people can’t play for that long, since they require sleep and food and apps / computers don’t.

Is it legal to cheat and will I get banned for doing it?
First off lets establish that cheating in any kind of game, such as board games, mobile games, online games ect, is completely and entirely legal and does not violate any laws anywhere. However, the developers of Heroes Charge, uCool, do have the right to ban anyone from their games or delete accounts to their liking. So if you want to cheat in the game, it is still required that you use quality bots of hacks for HC in order to make sure that your game account is safe. Make sure the apps you are using are kept up to date and undetected by professionals.