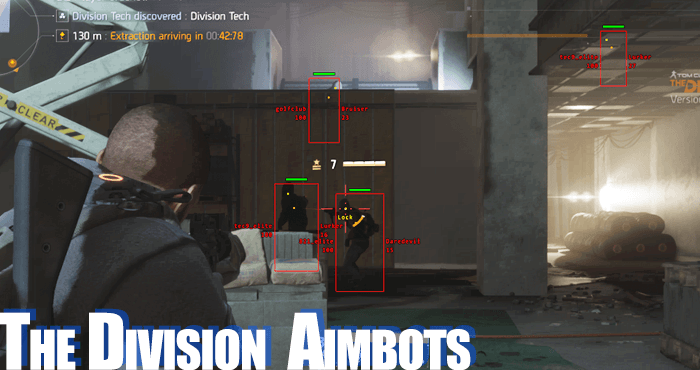 Is it possible to cheat in Tom Clancy’s The Division?
Yes, there are certain ways and pieces of software that can make cheating in The Division easy: As in most Third-Person Online Shooters, Aimbots can automatically aim at NPCs and other players in the Dark Zone, EPS or Wall Hacks can make enemies visible through objects, radar hacks make situational awareness easier and scripts can automate the use of items and skills. On consoles like the the Xbox One or Playstation 4, similar effects can be achieved using packet editing and hacked lobbies. However, cheating in The Division is easiest and most affordable on Windows PC.

How The Division Hacks and Aimbots work on PC
On Windows PC systems, Tom Clancy's The Division Hacks are pretty straight forward: Since in order for the game to process correctly and provide a fair gaming experience, the whole map around the player has to be loaded onto the users system, it is relatively easy to simply scan the map for objects, such as enemy players, loot, mobs and so on. Then Aimbots can be set up by simply automatically aiming at any enemy that you have line of sight on and Wallhacks are run by simply highlighting enemy positions thought walls and other objects. Since Computers offer the user what is essentially unlimited freedom, this kind of cheat is easily possible and the only thing that needs to be circumvented is any kind of anti-cheating software implemented in The Division. How The Division Cheats work on Console (PS4 and Xbox One)
Running any kind of hack or aimbot in the Console versions of the Division, aka the Xbox One or Playstation 4 versions, is a lot more challenging, since consoles do not allow you to run any kind of unsigned code by default. – This basically means that you need to actually hack your console, install custom hardware or hacked firmware in order to be able to run any kind of code that would enable you to inject code into the Division game process. Now this alone takes a lot of experience and know-how and what makes it even more complicated is that as of the year 2016, this new generation of console does not yet have any leaked or widely used way of hacking either the Xbox one or the PlayStation 4 and running unsigned code, such as hacks to create hacked or modded lobbies ect. Right at this moment the only hope is really to wait and see if there are any legitimate hacked lobby services popping up, since the Dark Zones may well be based in a peer to peer matchmaking system on consoles. 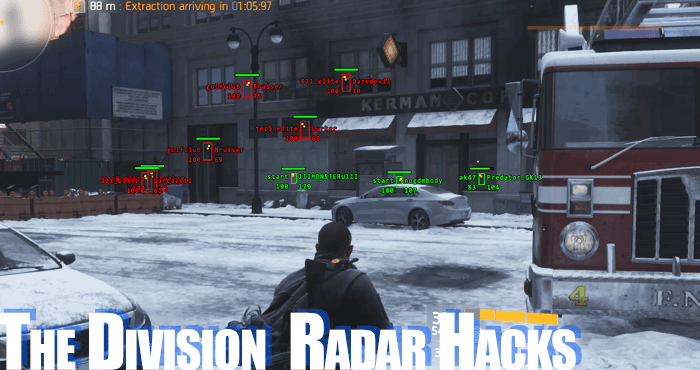 When is it OK to cheat?
Generally in life and in video games alike you do not want to be a complete and utter prick that annoys everyone and their dog. Not only will that not help you making friends in Tom Clancy's The Division, but it will most likely also get your account reported and banned sooner or later. Instead you might want to consider using you’re the Division Aimbot or Hack only against PvE mobs, or when you are hopelessly outnumbered in the Dark Zone by a bunch of Rogue Agents. In general you will find that being a good guy hacker in The Division is pretty easy, since to get the best weapons, mods, attachments, and other gear you really no not necessarily have to do a lot of PvP. Simply farm Dark Zone Elite Mobs in order to get epic and legendary rare gear and then use your Wallhack to extract from the DZ without being intercepted by rogues trying to take your stuff. That said, should you ever be hopelessly outnumbered, headshots are pretty overpowered in The Division and should take care of a group of people trying to take your stuff easily. 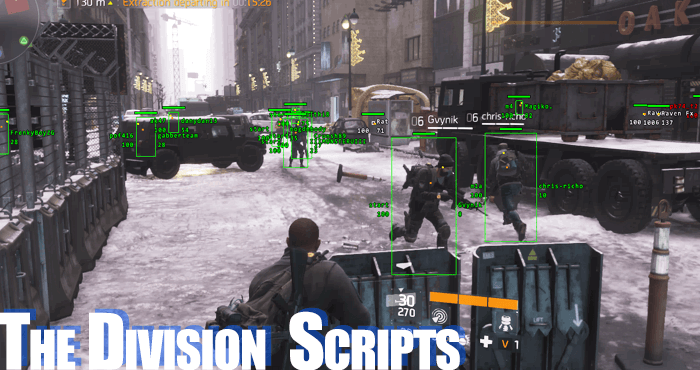 What hacks are possible and impossible?
Whether you are playing on PC or on a Console, there are certain kinds of cheats that will always be impossible: It is impossible to get the best gear in the game by using any kind of hack, it is also impossible to get unlimited money / credit or to change your player level to 30 using any kind of tool. Hacks can merely help you in fights to get and find loot and kill players and NPCs more easily or complete quests, but they cannot change your account inventory, statistics or other data, since it is stored on the very secure Ubisoft servers that cannot be hacked using any legal means.

How do exploits work and how do you find them?
As in many massively online games, there are bugs that are found once in a while that can potentially be exploited for what can potentially be unlimited money, items, experience and so on. However, these kind of bugs are extremely rare and there are no guarantees that they are ever found, since if they are found, it is usually by accident. However, if a cheater should ever find a unlimited money bug in a vendor or some other function, a item duplication (dupe) or other kind of exploit, it may well be that you can use it to gain a tremendous advantage over other Tom Clancy's The Division players. Never the less, we do recommend that you only use exploits that are being kept private by a small group, since people are very likely to get punished and progress rerolled if it ever gets public and the developers patch the exploit.

Are there any Scripts or Macros?
Automated key pressing macros are surprisingly useful in the division. Especially in Dark Zone pvp being able to automatically switch weapons, use med kits or abilities can save you valuable seconds and can turn the tide of a fight. Medical skills are extremely useful if automatically triggered by macros: Pulse for revealing enemies to your squad (that may not have ESP), First Aid for healing, Support Station and Recovery Link for healing you and your squad. Same goes for the Tactical Ling and Survivor Link or the Ballistic shield. Macros can be set up using software like AHK, autoIT or may even be purchasable in the future, if the DivisionPvP gets popular enough. Auto looting scripts may also be useful if you are in a hurry and want to run while picking up loot. Smart cover scripts may help you avoid damage as well.

I use Cheats, do I still need a Squad to do Dark Zone?
Having a squad to coordinate with is always useful. Especially since, even if you use an aimbot and ESP, can still only kill one enemy at a time and the time to kill is still higher than in most other online shooters. So while your efficiency is a lot higher using cheating software, you are still not in any kind of god mode and cannot 1v4 people in most situations. 1v2 should be possible, maybe 1v3, but even if you use auto aiming software, you simply cannot win a fight with a coordinated team of 4 if you  are solo. If you are in a squad, do not tell anyone about your questionable activity and don’t overdo it with the damage dealing to avoid being suspicious. Keep in mind that even your allies may report you if they suspect you of using any kind of unfair means to exploit the game. Overall farming XP, legendary items, crafting mats, DZ Currency and levels is a lot easier in a group even if you are using hax. 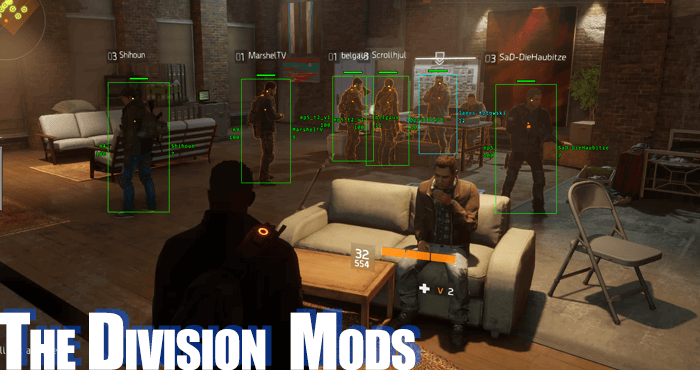 Q: Are there any The Division Private Servers? A: No, there are no private servers for Tom Clancy’s The Division of any kind and there most likely never will be any, since the game is pretty complex server software that cannot possibly be adequately emulated, unless Ubisoft starts offering them for rent.
Q: Are there any item duplication (dupe) exploits? A: So far there are not item dupes yet, though they are likely to crop up since the game was still pretty exploitable (speedhacks) in the beta and early after release.
Q: Is an Aimbott OP in the Divison? A: Headshots hurt a lot, so an Aimbot is certainly pretty powerful. However, constant headshots make you easily detectable by server-side anti-cheat and other players.
Q: How do I maximize my Damage using AutoAim? A: Set to headshot and use either an Assault Rifle or Sniper rifle. SMGs, LMGs and DMRs are slightly lower in DPS usually, unless you have a working noSpread hacks.

Is cheating legal and will my account get banned for doing it?
Cheating in video games, including online RPGs and Shooters is completely legal all over the world. However, the developers / publishers of the game, in this case Ubisoft, are allowed to ban whoever they want from their games and services for any reason according to the Terms of Service of the game. For this reason it is highly recommended that, should you want to use cheating software for Tom Clancy’s The Division, you use the highest quality software available that is being kept undetected and up to date at all time to keep your account safe.