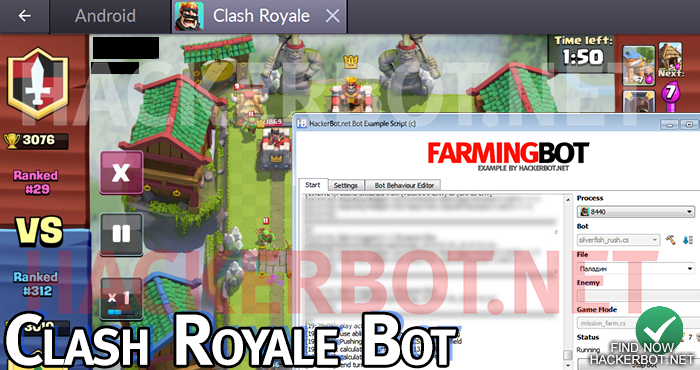 Is it possible to Cheat in Clash Royale on Android and iOS?
Cheating is indeed possible in a variety of ways: Hacked .APK or IPA App files can be used to change game functions client side on Android and iOS, automated playing software can be employed to farm gold, XP, cards and trophies automatically and level up your cards. Clash Royale Bots can also be used to open free chests as soon as they are available, giving you a lot of free gems. However, unlimited money and Games hacks and mods for Clash Royale do not exist, since this is an online mobile game.

Auto fighting bots can be used to automatically fight opponents in arenas and depending on the A.I. may even be able to bring you into legendary tier. A simple bot will be configurable in what units to use when and how to react to your opponents spawns.

Clash Royale Bots can also be used to check for free chests every hour, allowing you to get up to 6 free chests every day from that alone. – This will allow you to get all the Legendary Cards faster and level them up. They can also automatically combine and upgrade the cards you have using duplicates.

While a CR bot is certainly able to play the game and play it well, if you want to get to the very top, you will still have to play manually, since a human brain will always be able to outwit a computer player in most circumstances. 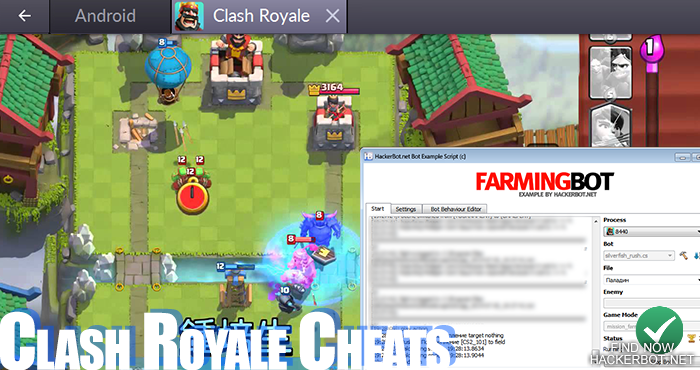 A hacked app or .apk is basically a hacked game client that will send different data to the game servers than a normal client would. This kind of hacked client may allow you to spawn units faster, make certain rare exploits like duping or unlimited gems, gold ect possible and so on. However, there is no reliable way to get god modes for your towers, units, unlimited gems and gold or trophies, unlimited Super Magical Chests since those exploits will usually be patched within mere days of them being discovered. Hacked APKs and Apps may also be able to auto complete achievements and reward you with a lot of gems.

Do Clash Royale Cheats exist for both iOS and Android?
As things are right now, Android has a bigger user base and a lot more developers that iOS, but cheats do exist for both versions of the game. It’s a Supercell game and therefore is quite popular and will have a lot of hacks and bots developed for it. However, hacked APKs and android automated scrips are usually available a lot earlier.

How to cheat safely?
If you are using any kind of cheating program, then do not tell anyone about it. Do not brag, do not share it with anyone. Even your best friends may report you if they find out, because cheaters are not very loved in online games like CR. Use software that is of the highest quality and kept up to date at all times and kept undetected, if you are looking to use it on your main account.

Is it legal to cheat and will I get banned for doing it?
Cheating in games, while people certainly do not like it at all, is entirely legal all over the world. The only problem about it is that it is against the games Terms of Service and can potentially get your game account at Supercell banned. However, beyond that there is no kind of danger to using cheats in online game apps like Clash Royale.

Is there a Way to unlock all Troop Cards and get unlimited Gold, Gems and Free Chests?

Clash Royale is an online multiplayer PvP game and that essentially means that a lot of the data is stored on the Game servers that belong to Supercell and that in turn means that any significant game value for your account, such as your level, your ranking, your gold, your cards and your deck cannot be hacked using client side hacks and hacking the servers is impossible. So be careful if someone offers you hacks, and generator downloads that are impossible… chances are the impossible is not possible even if you make a generator for it.