Is it possible to Cheat in Mass Effect: Andromeda Multiplayer?
Yes. Aimbot programs can be used to aim your weapons, abilities and melee attacks, triggerbots can be used to automatically kill enemies using headshots. ME: Andromeda Hacks can allow you to see enemies through walls, speed up your character and animations. There are also scripts that will automatically use protection abilities or dodge skills to avoid damage and help you survive in situations where human reaction time is not enough. Bots may be used to automatically AFK farm missions for lots of free credits to buy premium packs and unlock all ultra-rare weapons, mods and characters. Host hacking can allow the host of a game to go invisible or get a god mode, unlimited ammo ect. – However, since the Mass Effect: Andromeda Multiplayer is an online component of the game that is processed on the EA servers, it is impossible to get a trainer for unlimited credits, Andromeda Points or unlocks. 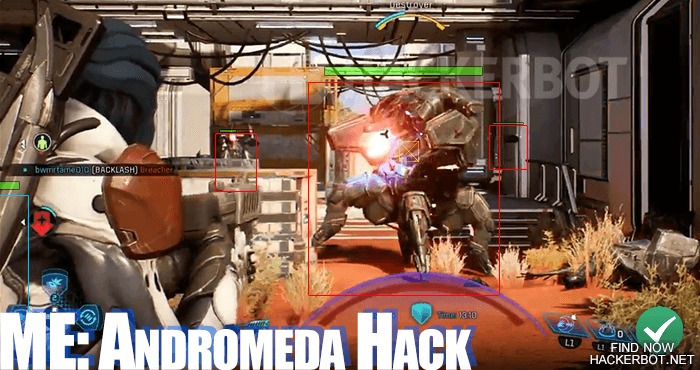 Mass Effect: Andromeda Online MP Hacks
The game can be hacked on any console: PlayStation 4, Xbox One and Microsoft Windows. However, as always cheating will be easiest on PC, as it offers the easiest way to alter game filed, inject code and run unsigned code overall. Wallhacks that allow you to see through walls are very basic and allow you to easily see enemies, their health, their level ect without having to have line of sight. Speedhacks can speed up your movement speed and animations, such as jumping, taking cover, reloading ect.

However, the real ME Andromeda Hack is what can be achieved by modding a game through the game host. Andromeda Multiplayer uses P2P lobby match hosting, which means that one player will essentially be the game server in every game and that in turn means that all the important game info, such as your health, ammo, weapons, level, ability cooldowns, visibility ect are all stored on the hosts machine. So if you have a hacked console that can run unsigned code or hack the game on your PC, while being the game host, you can literally achieve invisibility hacks, God Modes (unlimited health), get any weapons in the game, have 0 ability cooldowns ect. – However, these cheats only work as long as you are the host of a game and they can’t influence your overall credits or Andromeda Points or Premium Packs directly. Also modded lobbies are among the most complex hacks out there are very hard to find, even thou it is the most powerful Mass Effect Andromeda Hack out there at the moment. 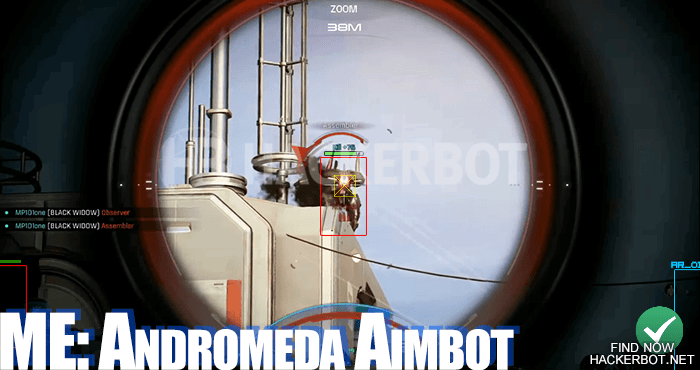 ME: Andromeda Aimbots (Auto Aim and Shoot)
Auto aiming software will allow you to bind one key / button on your controller to an auto aiming function that will automatically target any enemy in line of sight and shoot them (triggerbot) if you set it to do so. Andromeda Aimbots are the best and fastest way to farm credits, as they allow you to get constant headshots, killing waves of enemies incredibly quickly, preserving ammo, making it unlikely for you get downed, makes it easy to revive other players and makes beating levels on gold difficulty a breeze as long as you have a decent gun and a lvl 20 character.

On top of that other players generally won’t mind you dominating the game, as they only gain better rewards. So the chance of getting reported for cheating is incredibly low, since you are only helping other players, unless you blatantly steal kills. The Mass Effect Andromeda aimbot is also without a doubt the best way to unlock a lot of packs and ultra-rare stuff quickly and without having to spend money for Andromeda Points, plus it levels all your characters and farms Apex Rating  at a very impressive rate too. 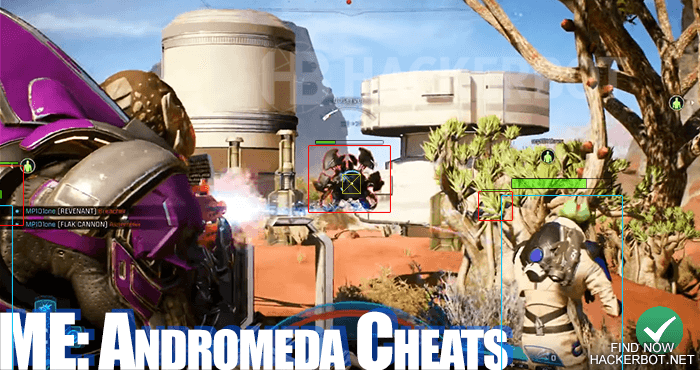 Modded Lobbies / Hacked p2p Hosts
Generally, modded p2p lobbies are used on consoles as opposed to PC, since computers offer very easy implementation of auto aiming which is almost as OP. Modded lobbies are usually started by a player that has a hacked Xbox / PS that is able to run unsigned code and edit the parameters of the game. The host of the hacked lobby will then unlock all weapons, give invisibility, self-revive or god mode, get all characters and so on to the person that is renting a hacked lobby. In very rare cases the software to create and mod a lobby is released and available for download. However, so far there are no Mass Effect Andromeda hacked Server scripts available.

A lot of Xbox / Playstation users are asking if it is possible for them to hack their own consoles and the short answer is: No, unless you are an absolute generous or have several degrees in hardware and software engineering or get a hold of a very, very detailed manual including the hacking software and tools required to jailbreak the console and execute unsigned code. 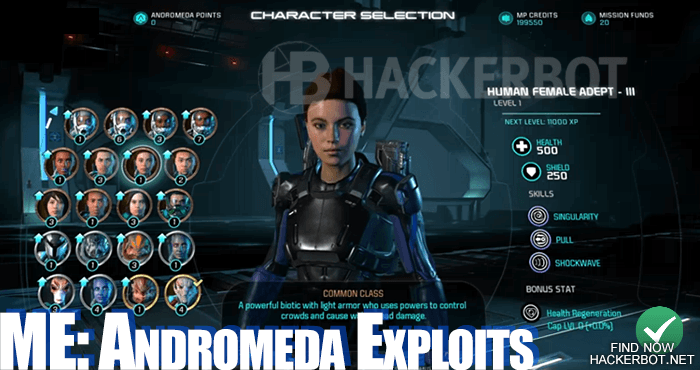 Is it legal to cheat in Mass Effect Andromeda?
Cheating in all games is completely legal everywhere in the world. And in this particular game, people will even be thankful if you are killing high level enemies on gold difficulty and carry weaker players with you perfectly aimed headshots and abilities. Bioware and EA still have the right to ban anyone from the game for any reason, so only download cheating apps that are 100% up to date and undetected at any time. However, bans are unlikely as you are not annoying anyone.

Are Andromeda Ponts Generators, Credit Adders and free Premium Packs for real / legit?
No they are not. This data is stored on the ME Andromeda game servers owned by EA. The only way to change your credits or unlocked weapons is by unlocking them through packs and playing the game, unless you are a game admin or developer over at Bioware. All the people promising you all ultra rare unlocks, mods, isnta level 20 and so one are trying to scam you into filling in survey offers or downloading malware. So don’t trust people that offer you the impossible online, or anywhere for that matter.