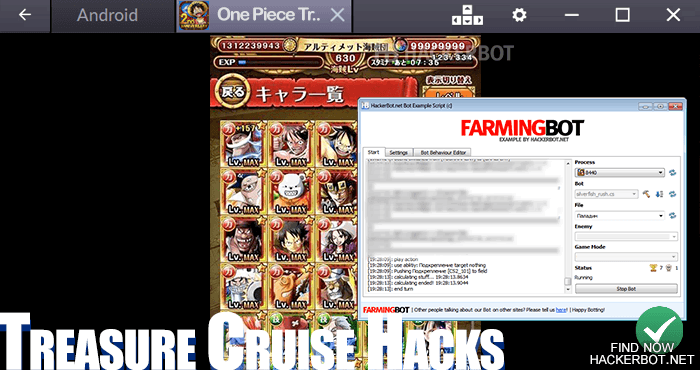 Is it possible to cheat in One Piece Treasure Cruise?
Yes indeed it is possible using multiple means: On one hand one is able to hack the actual game and game files for hardcoded hacks and cheats in the game. Another way of cheating in One Piece Treasure Cruise is to use automated scripts / bots or macros to automatically farm missions, fortnights, raids, auto collect rewards, level up characters, farm gems and money over time completely for free. Cheating apps can be set up for iOS and Android alike, but iOS generally easier on Android. - There are no unlimited money or gem hacks, since this is an online game and your savegame is stored on the game servers that cannot be hacked.

Mods are modified or modded versions of Treasure Cruise that come with cheats already enabled. All you have to do is download the modded or hacked .APK or .IPA file, depending on if you play on Android or iOS and install it instead of the original game. After you installed the hacked version of One Piece Treasure cruise, you can now start the game and play with cheats enabled without having to do anything else.

These mods can be found for free, but are usually updated whenever the game gets an update, which means you will need to download the latest file every single update, if someone is awesome enough to actually code a free hack for the game. However, this is the easiest way to get cheats working in the game. 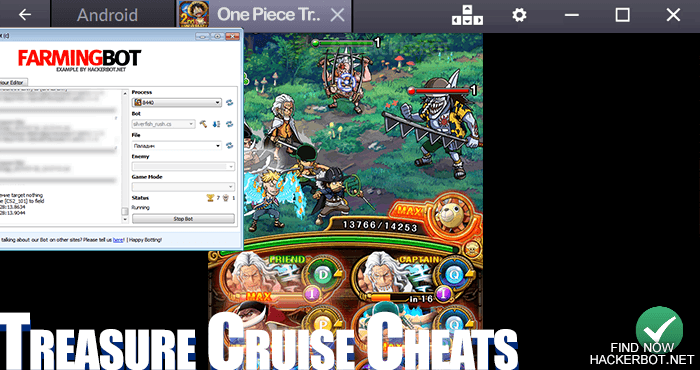 When it comes to hacking this game there generally 2 popular and effective ways of doing things: On one hand you are able to manually hack the game using a memory editor, such as GameGuardian, SB Game Hacker or Cheat Engine: This essentially means that you find and edit values while the game is running manually, speed up the app, slow it down ect yourself using your own technique or following a guide of someone who hack hacked One Piece Treasure Cruise before.

The other major way of hacking OPTC is too use hacked or modded game files. These are edited versions of the original One Piece Treasure Cruise APK or OPA files that have been decompiled, modded to include cheating options, recompiled and shared on the internet for you to download either for free or payment. - While it is certainly easier to use premade hacked APK/IPA files with cheat already hardcoded into the game, one needs to be careful to only download such files from trustworthy sources or one might run into some considerable problems. - If it sounds to good to be true, then its probably not. A rule to keep in mind when downloading any game cheats. 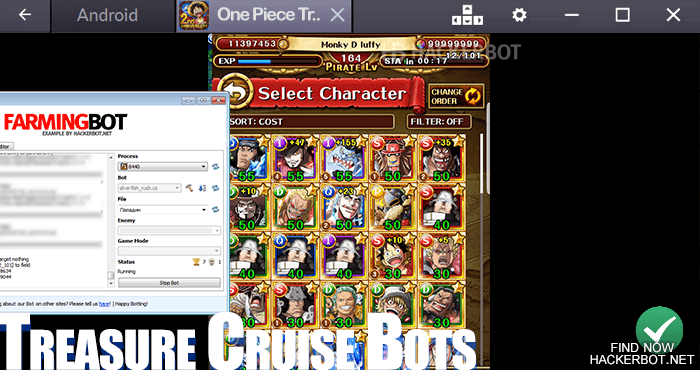 Bots is a word used for any app that is designed to automate actions in One Piece Treasure Cruise, such as farming beli, gems, turtles, skill books, pigs, heroes/characters from raids, fortnights, story missions, pvp ect automatically without requiring you, the player, to do anything at all. Essentially a bot wiill play the game, or at least certain aspects of it for you and therefore is, over time, the closest you can get to an unlimited rainbow gem hack or money hack as you can get in this game.

Bots come in 2 varieties: Prescripted bots that you can simply run on your iOS, Android, Emulator or PC that will either interface directly with the game server to farm for you or will play the game through its interface. The second version is a potentially free one, which is the use of macros in which you record and set up your own macros through an emulator and farm the game that way completely for free to keep your stamina spent, your characters leveling and your gems increasing slowly, but surely.

Is it legal to cheat and will I get banned?
Cheating, as in all games is legal, but not generally loved among players. So dont expect any love for it. However, cheating is completely legal. What scares a lot of people is that using hacks or bots is against the games Terms of Service or End User License Agreement, but these are no enforceable contracts. However, when cheating keep in mind that Bandai Namco has the good right to ban any player from using their service at any time and for any reason. So it pays not to mess with them intentionally, support their work once in a while and not be a jerk. Also use professional cheating software that is kept up to date and undetected by professional developers to make sure your account is safe.

Are there any unlimited gem hacks? are they legit?
No. These do not exist. As already pointed out, this is an online role playing game and your account data, including your gems, money, characters, inventory ect are stored on the One Piece Treasure Cruise servers belonging to Bandai Namco. The only way to actually get unlimited rainbow gems it to know a developer, game admin or moderator, which you probably don’t. Farm the game, spend money if you don’t have patience, but don’t trust anyone online offering you some kind of generator / tool that is impossible. Anyone can claim the impossible online, all one needs is an internet connection and a keyboard. Keep that in mind before "downloading" anything.