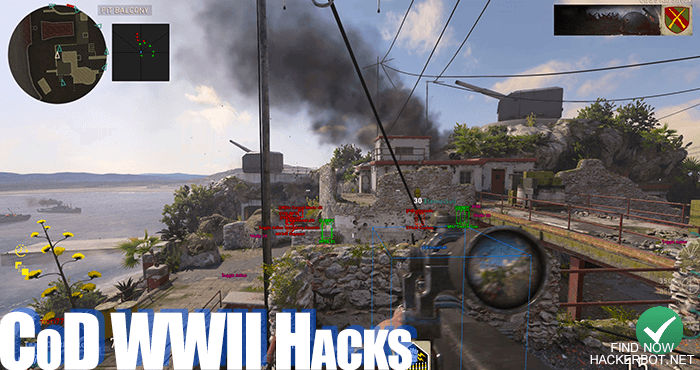 Is it possible to cheat in Call of Duty WWII? (Xbox One / PS4 / PC)
Indeed cheating is possible in a variety of different ways both on Xbox One, PS4 and PC: Aimbots can be used to automatically aim and shoot guns In Call of Duty: WWII, Wallhacks allow you to see enemies on your radar and through walls, macros and hacked / modded controllers allow you to dropshot and full auto any gun (quick tap mods). Hacked lobbies are still possible, even though CoDWW2 is using some dedicated servers for some games, P2P lobbies can still be hacked and god modes, invisibility, max prestige, all gold weapons / camos ect is still possible if you have a hacked console. Boosting is also still possible.

As always the easiest way to cheat is to use the platform that allows you to run unsigned code right out of the box, the PC: Aimbots, ESP Hacks, Radar Mods, Macros and a lot more is pretty common here and cheats are pretty readily available. These kinds of cheats are possible on consoles as well, but would require a hacked box or a very incredibly advanced packet editing setup.
On Consoles however, the most popular way of cheating at the moment is to use modded controllers that allow users to full auto semi-automatic weapons by holding down a trigger/button, dropshot automatically, improve auo-aim ect. Essentially, on consoles the controller has taken the spot that macros would have on a PC in that they can automate certain actions such as trigger pulls, crouching, dolphin diving ect. 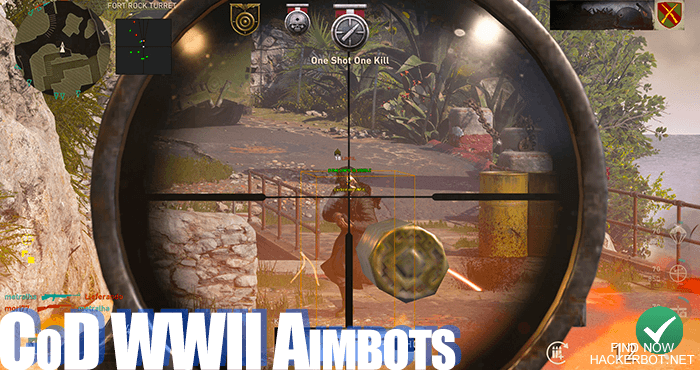 The Risks of Cheating in CoD:WWII Online Multiplayer
First off, the online multiplayer component of the game is a service provided by Activision / Sledgehammer Games and they have the right to deny their service to anyone without having to state or give any reason whatsoever. So while hacking online games is certainly legal, you are taking the risk of getting banned from the game. While such bans are not necessarily permanent and it is possible to get unbanned if one plays ones cards correctly, it is still a major risk, especially if you have invested a lot of time into your account, unlocks, camos ect. So respect your fellow players, let someone else be top score and remember: A good hacker cannot be differentiated from a pro by looking at kill cams.

If you want to be safe from bans, use paid cheating software provided and updated by professional programmers that will make sure that the software is 100% undetected and up to date at all times. If you are downloading free software, make sure that it is confirmed undetected in the last 24h or get ready to be banned from CoD WWII. 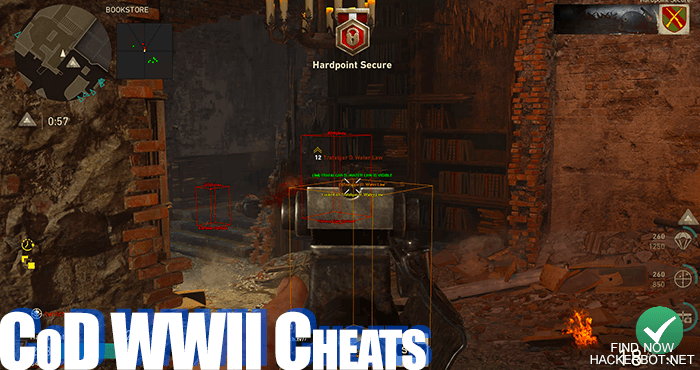 These two kinds of software are incredibly similar, since they both use ram / vram data to pull objects from the map and their coordiantes, scan for players and then either highlight those players in colorful boxes or automatically aim your guns at players in line of sight and shoot them for easy kills. Radar hacks are also used to give the user a 2D map that displays enemy positions (permanent UAV / Recon Aircraft), making it easy to flank, avoid, stalk, locate and kill any enemy players.

These kinds of hacks will not only make getting kills and playing the objective a lot easier, it will also allow you to get higher score streaks, even more kills, more medals, achievements for even more XP and will allow you to farm up unlock tokens, attachments and prestige levels at insane rates.

What weapons you use really does not matter when using these kind of cheating app: But if you want to play it safe, use aimbots with automatic weapons to hide janky aiming movements (STG / Tompson ect). And avoid semi-automatics and snipers. For Wallhack users, use shotguns and SMGs since knowing enemy positions will give you a reaction time advantage in close quarters. Always consider the killcam. 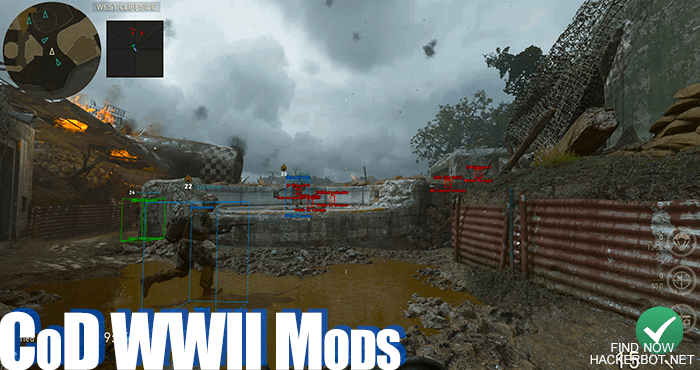 How to tell if a Call of Duty WWII player is cheating.
Keep in mind that good cheaters will be able to hide their cheats, even if you were to look at their whole gameplay. Bad cheaters on the other hand will be reckless and more likely to be toxic, trying to dominate other players ect, therefore should get banned. So here is how you spot hackers:
ESP / VAC / Wallhacks: Bad wall hackers will track enemies or look at enemies through walls, prefire corners if they know you are about to push around a corner and generally their skill wont measure up to their awareness of enemy position.
Aimbot Users: Bad software will shoot you through walls, bad users will aim instantly, switching instantly between targets in the killcam. Users that know what they are doing will enable aim smoothing and trigger delays, in that case it’s incredibly hard to tell if someone is hacking. The aim will be a bit too smooth and the wont overshoot the target when taking aim.
Macros / Modded Controllers: Perfect drop shots, incredible fire rate on semi-automatic weapons. Very hard to detect, since CoDWWII has a cap on fire rate on semi-automatcs. Instant dolphin dives for avoiding damage ect.

As always we do not stand for witch hunting. Please only report players that are clearly doing stuff that is not possible without software or modded equipment. Only because someone is better at the game, that does not necessarily mean that they are a hacker.

Hacking the game to unlock everything, level 55, all gold camos, max prestige ect has not been possible ever since CoD4. Back then it was still stored on the gaming platform, but nowadays its all stored on the Activision game servers and cannot be hacked through any means. Anyone that offers you a prestige generator or some kind of online hacks is trying to scam you sadly.

With other words: If you want all the cool camos, if you want prestige level 10, if you want all the attachments and max out all your divisons, you will have to play the game. However, boosting is still a thing. Essentially you get together with some people that want to unlock stuff as well and you kill each other fast and economically in any game mode, use a system to split kills and everyone gets the max amount of kills, headshots ect possible per match. This is a very boring way to unlock camos and farming prestige, but it has worked for a long time. Chances of getting banned are virtually 0, since no one really cares as long as you are not interfering with other peoples games.

Are CoD:WWII Cheats worth the money or should I Download Free Hacks?
All I can give you here is an opinion: Having used aimbots and wallhacks for many years on and off on many different online shooters, I find that hacking takes a lot of the fun and sense of achievement out of the games I have played. Unlocking stuff and getting score streaks just does not feel the same if all you have to do is walk around and hold down a button or tow once in a while.

Turning off your aimbot and only running VAC (Visual assistance Cheat) makes the situation better, but games still don’t feel the way they did when I played CoD for the first time and spent about 2 straight days to unlock that golden Deage. Its normal really, if you take away the challenge, you are taking away the achievement and the sense of accomplishing something. The result for me is that I don’t play a game as long. If you are not looking to spend 100s of hours in Call of Duty WWII, then you might love that. If you love to grind for a long time, you might hate that.

However, I cannot recommend downloading any kind of free hack, unless you know the guy who made it and know him to be trustworthy and are 100% sure that the software is currently undetected. I don’t personally think taking the risk of a ban and having to rebuy a game and level and unlock everything again is worth the few bucks you save.

CoDWWII Hacked / Modded Lobbies (p2p matchmaking exploits)
in WW2 the modded lobbies will make a return, even though some lobbies will be hosted by dedicated servers (no private servers though, no kicking players, no server admins, no 54 people servers, no banning players from a specific server/lobby), once the servers are at capacity or if servers don’t cover a specific region, a player will host the match instead aka. P2P game match hosting.

That essentially means that is a good portion of matches in Call of Duty: WWII all the important data, such as player health, ammo, positions, unlocks, weapons, camos ect will actually be processed on players consoles / machines, which leaves the data open to hacks such as: God modes, invisibility, walking through walls, unlimited ammo, all unlocks, max prestige hacks, level hacks, all gold camo hacks ect. However, this kind of cheat will require you to either own a hacked console or to know someone that is willing to invite you into a modded game lobby and activate the hacks for you. However, even this won’t unlock gold / diamond /dark matter camouflage / skins or free loot crates / supply drops, but can only activate skins for the duration of the lobby.

What can be done to Stop a lot of cheating in Call of Duty?
The answer to this is simple: Anti-cheats won’t do much and neither will server-sided analytics software. The only real way to stop cheating in Call of Duty including the WWII yearly release is to reinstate the rentable private server / dedicated server system from way back in 2007 with CoD4. This system will allow server mods and admins to ban auto-aimers, hackers, aimbots ect from servers permanently, kick them ect, allowing the players themselves to moderate the match they are playing and trying to enjoy. Of course creating a system that allows for renting servers is more expensive than going with a Peer to Peer hosting system or dedicated servers solely controlled by Activision, but it would get rid of most the problems with hackers, since the CoD community could take care of the problem themselves. It would also allow the games to go back to a system where more than 18 players can play the same match, which makes the game potentially more fun for everyone too.