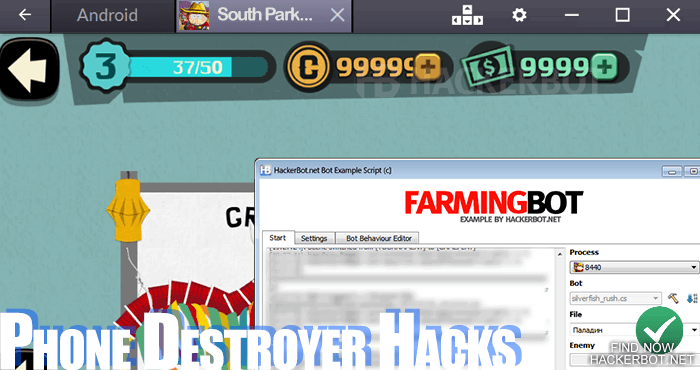 Is it possible to cheat in South Park: Phone Destroyer? (Android / iOS)
Yes, there are way to get some cheats going in the Phone Destroyer app on both Apple and Android devices using modded apps/apkl files, bots, macros and other cheating tools. While this is an online game, which means that it is sadly not possible to hack Gold, Cash and Cards directly, farming can be automated to get more cards, get legendary cards without having to play the game and for free. Scripts can be used to redeem free packs automatically, farm battles, open lockers and even do PvP automatically. Phone Destroyer hacks allow for auto spawning cards, but do not allow for God Modes, unlimited energy or unlocking legendary cards.

There are multiple methods of hacking this game: Either one uses one of a variety of game hacking apps or memory editors to manually hack the game, or one uses a prehacked version of the game, or modded APK file to play a version of the game that has already been decompiled, modded and recompiled. Most people will chose to use the much more accessible mods, since they usually do not require any advanced experience and don’t require a rooted phone or device to play. However, these hacked versions of South Park Phone Destroyer are not only hard to find, but have to be kept up to date by professions, every time Ubisoft pushes through an update of the game app. 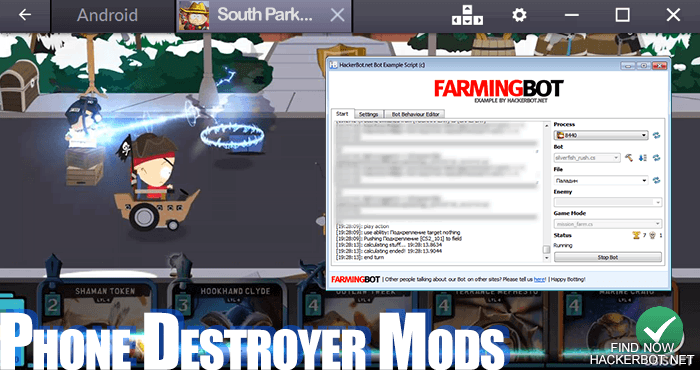 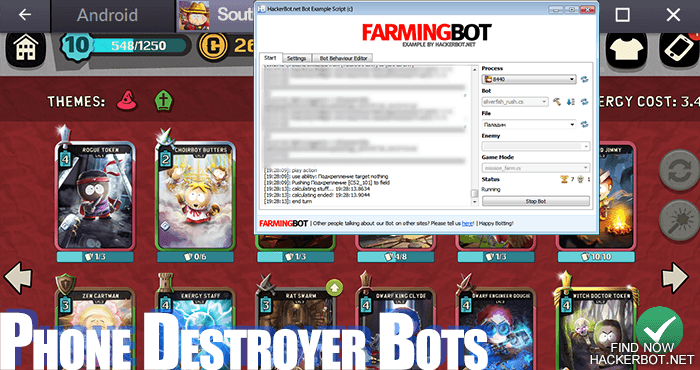 While it is not possible to edit your money and cash values directly, it is possible to program scripts / macros and farming bots to automatically farm the game for you. Bots can automatically redeem free packs for more cards, upgrade cards, automatically fight story missions and PvP battles and participate in group / guild activities as well. Bots can be downloaded for free, purchased or made yourself if you have the patience.

If you are looking to create your own bot, all you need is either a macro app for your phone or a PC where you are able to set up a emulator and a macro recorder with editor functionality. Essentially, you use the macro software to create a simple loot in which you complete actions, such as farming money in missions, opening lockers,  redeeming packs, then loop back to where you started and set the macro to play on an infinite loop so the bot can farm the game for you 24/7. A good way to enjoy all the spoils of Phone Destroyer without the grind.

Is cheating in South Park: Phone Destroyer morally ok?
Essentially, from a moral point of view, there is no way to annoy anyone if you are using a modded game client or any other kind of way to get around the rules, since there is really no way to get a direct advantage to gain an advantage in PvP. You will always be matched with people that have the same levels of cards, the same strength, and there is no way to give yourself more damage or survivability. Using Phone Destroyer Hacks or Bots is no more unfair than spending money on card packs and boosters. While a script may have a better reaction time than a human player in PvP, it has no creative thinking and all things being equal, it is still likely to lose to a human player.

Of course, Ubisoft and Sound Park Studions still have the right to ban everyone from their games, apps and services for any reason,  without requiring proof and that is their good right as a game developer and publisher. – Keep that in mind. But since you are really only influencing your own experience, that is unlikely to happen.