This is a short Tutorial on how to create your own speedhacks and slow motion hacks for online and offline games. This will work with most games and will require you to have Cheat Engine installed.

How it works
This is a very simple hack, since Cheat Engine features a built-in speedhack feature that will allow you to slow the action down to a crawl or speed it up to 500 times its normal speed, if your machine can handle it. Speed cheats are quite useful in most games that require a good reaction time, shooters and so on.

How to Speedhack / Slowhack
1. Install Cheat Eingine, since this is the software we use.
2. Start up your game and CE
3. Click the little PC icon in Cheat Engine to connect CE to the game
4. Choose your game process and double-click it
5. To the right you will see a box that says “enable speedhack” check it
6. Below enter the speed you desire (1=normal speed, .5= half speed, 2= double speed and so on)
7. Click apply to apply it to the game 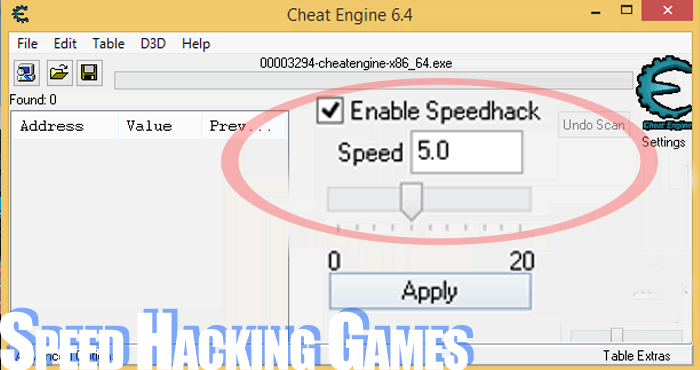 What to do if it does not work
Sadly not every game can be hacked for speed using this particular method. Some games seem to tie the game speed to the frames per second in some way, which will inhibit this from working in some cases. There are also some newer games that are also immune to this technique. However, this simple built-in speedhack should work for about 90% of all games you will come across on the PC platform.

Does this work for flash games?
Yes this also works for flash games and some browser games as well. However, finding the right process can be a bit tricky depending on your browser. In Chrome you will literally have to go through every single one of the about 20 chrome processes and testing a freeze (0 speed) in order to find the correct process. However, in other browsers like safari, firefox or IE that is less of a problem.

Does this work for Online Games?
It really depends on the game. Simpler games often can be speedhacked, while more complex games might automatically disconnect you after just a few seconds. I would not necessarily try this on any modern online shooter or mmo, since they will usually just desynch you and teleport you back to where you are supposed to be, since there are usually server checks in place. On the other had there have already been a few online games in the last few years that were hackable through cheat engine speed hacks for a few months after release. So try it for yourself.

Are there Ways to speed up Mobile games as well?
If the game you are looking to speed up or slow is not a PC game by default, try running it on an emulator (for Android/iOS/ect) on your PC and applying the technique as you would with a normal PC application. If that does not work, you may want to try memory editors and other mobile game cheating apps. There are also apps that allow you to specifically speed up or slow down your mobile or PC click for idle games and games that calculate ingame time based on real world time.