Are there any actual ways of Cheating in BF4?
Yes, there are. The use of certain visual mods can allow you to see opponent through walls and auto-aim scripts can program your PC to aim and shoot for you. There are also some smaller exploits that are less popular. However, there are NO god mode, ammo adders, rank hacks, weapon unlockers or similar.

Is it legal to break Game Rules and will I get Banned for doing so?
Cheating in video games is not a criminal offense. Yes, you can get banned if you either decide to be the annoying kind of cheater that kills the whole enemy team or if you are using outdated software. If you are being an antisocial prick of a cheater, people will report you and you will hopefully be banned for ever. – So don’t be like that. 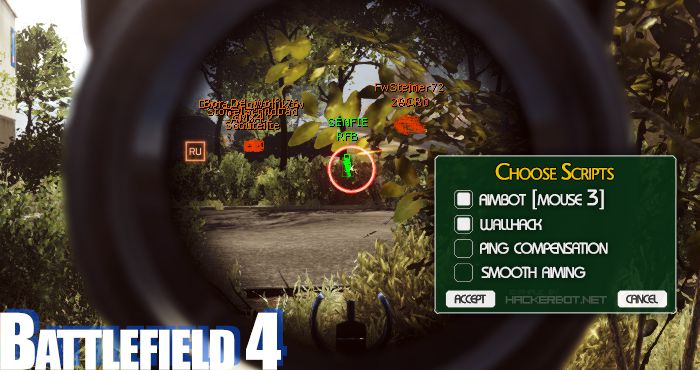 Battlefield 4 Aimbots
Aimbots are, just like the name implies, scripts or bots that will automatically aim for you and in many cases do all the shooting as well. They are commonly activated by pressing hotkey, in some cases holding down a certain hotkey will activate the aimbot. Aimbots are the most effective and also most hated kind of cheat around in Battlefield 4 and other Multiplayer FPS games. Where ever an aimbot is used excessively, people are sure to be annoyed, which is why aimbots should be used with caution and without excess. Most aimbots are able to headshot up to 10 enemies per second and in games with realistic projectile penetration physics, one single bot is able to totally dominate a whole server until ammo runs out.

An exactly because these hacks are able to shut down whole servers, these kinds of hacks are going to get you banned very fast, if used incorrectly. I recommend only using aimbots for fractals of seconds before disabling again, as to not let people get suspicious. However, a lot of people that are using aimbots, just want to see the world burn, use them without caution and end up setting themselves and anyone else using the same hack on fire instead. 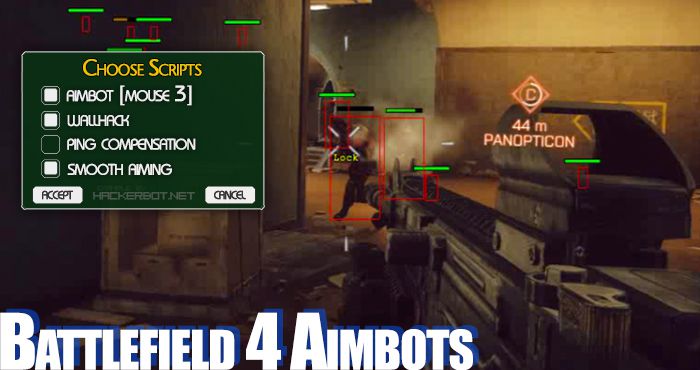 BF4 Trigger Bots
Trigger bots for Battlefield 4 are a lot safer than aimbots, since they do not do any aiming for you. All a trigger bot does is detect if an enemy is in your crosshairs and if so, triggers your weapon to fire. This kind of cheat is a lot harder to detect for anyone watching you play, since I could very much be possible that you just have some insane reflexes and are not using hacks at all. I would always pick a trigger bot over an aimbot when playing BF4 or any other FPS, simply because it is a lot safer and does not annoy everyone else as much. Trigger bots are especially effective when used along with marksman or sniper rifles on medium distance, but less so at high distances due to the bullet travel time. However, most effective is a trigger bot in close quarters combat when used on a shotgun, allowing you to get a lot of easy one shot kills. But as always: Be careful, respect the players on the other team and the game itself.

ESP Hacks (Extrasensory Perception)
ESP hacks basically display data for you that in an unhacked Battlefield 4 game would not be visible to you. These can be things like player names, player health, player class, player positions, distance and so on. The most common one is the enemy player position on the map. So that basically means that you know where the enemy is no matter if you have UAV support or not and that is certainly a huge advantage to have in BF4. ESP hacks do work because even though the game does not display information like the position of all enemies to you, their position is still being stored in your game memory (RAM) and can be extracted and shown to you in various forms. There are also 2D ESP hacks that will either display all the enemy players on your game map or on a custom map, allowing you to track enemies outside your field of vision. 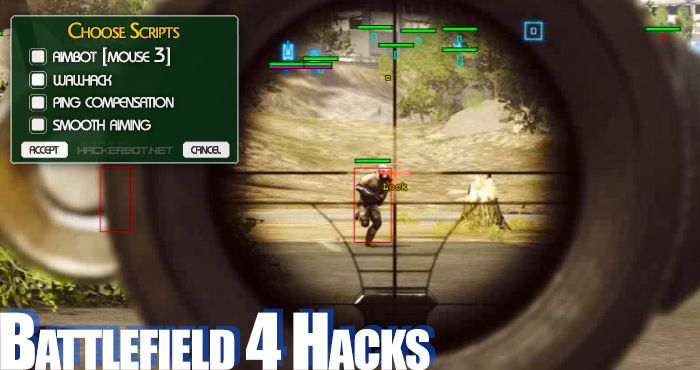 BF4 Wallhacks
Wall hacks are basically ESP hack and another very common cheat used in the Battlefield 4 multiplayer. Such a hack will simply show you the enemies even if they are behind a wall, allowing you to kill them easily even though you are not supposed to know their position. These kinds of hacks, again, are easily detected by anone watching you play and should be used with caution. If people see you killing you headshot someone through a wall once, they might categorize that as luck, but if they see you constantly giving people wall-headshots, then they will know that you are a hacker and ban you from their server and maybe even report you to EA and that is not what you want, so use with caution.

Wall hacks are the perfect combination between cheating hard and not drawing too much attention, since the give you a huge edge over your opponents, but do not make it obvious that you are hacking if used correctly. All you have to do is resisting killing enemies in situations where you couldn’t have possibly been aware of their position. For example you should never headshot anyone through a wall, since that is something a normal person is just not able to do more than once a year. 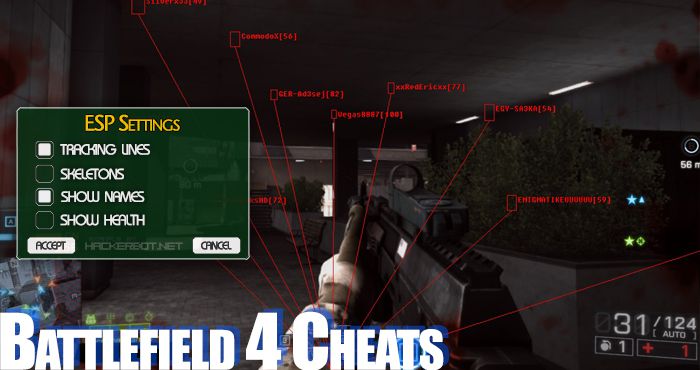 BF4 and the FairFight Anti-Cheat
We have always told our dear users to use hacks as carefully as humanly possible in order to avoid provoking other players and protect their own accounts. In Battlefield 4 the FirFight anti-cheat software is used. This is software that will analyze your statistics and figure out if you are using hacks. If you set your aimbot to aim slowly and don’t go overboard and killing everybody all the time, as we always recommend, then you should be fine. It’s still ok to be the best player in a game, but do not ever be obvious about cheating. Keep your k/d ratio realistic and just play the way you would play if you wanted to make sure that no one watching you closely can figure out that you are cheating. You have been warned. Don’t get banned.

BF4 Private Servers, Farming Servers and related Exploits
As in pretty much all battlefield games it is still possible to rent your own ranked servers and a lot of gaming websites and clans do it and have a lot of fun with running their own server. However, this can also be exploited to a certain degree in order to gain levels quickly and create farming servers. While it is impossible, at least to our knowledge, to mod or hack the actual server, since you rent it from a provider that is obligated to keep the software up to date and non-tampered-with, you are still able to use your own server to level up quickly and gain lots of points. One very simple method and one that is not really against the rules is to make a server with rules that make farming easier: Knife or Pistol servers are a great example here. It takes lots of ammo to kill people with pistols, they have short range and that means medics and ammo support packages will earn literally tens of thousands of points. Anyone that does not keep to the rules can be automatically banned or kicked from the server if you have administrator privileges. A more rule-breaking method would be to create an actual farming server where you any your clan (or bots) just constantly farm each other for points and everyone else get automatically kicked leaving you to gain lots of ranks away from prying eyes. – It does have to be pointed out though that running farming servers is quite risky and you may lose your server and account if the game moderators find out about it.

Battlefield 4 God Mode Hacks, Experience and Unlimited Ammo Cheats
This kind of hack does simply not exist. These days it is impossible to get unlimited health in any half-way serious MMO or Online Multiplayer Game, since the health values are processed on the server and not on your PC. Anyone who tells you that they have a working God Mode Cheat for Battlefield 4 or any other Online FPS for that matter, is someone who wants to get your money and nothing else. Same goes for your Level, Experience, Ammo and a lot of other important values. The only way to hack these would be to actually hack into the EA severs, an act that is highly illegal and would get you imprisoned quite quickly, so don’t even try. If someone tells you that they have a working god mode or level hack, then chances are 99.9% that they are lying, do they not have a video showing off the hack in action, then they are 100% fake.

How much do BF4 Cheats cost?
A price ranging from 10$ to 20$ per month can be expected for an average subscription to a quality provider. Higher quality usually also means more features and more security.

Are there any Free Battlefield 4 Cheats out there?
Yes, there are indeed. However, free cheats are a high risk for detection due to their easy availability. So getting to cheat for a few hours without paying might not be worth losing your account and game over. Also you need to be careful when downloading files from public places where anyone can upload stuff.