Is it possible to cheat in MapleStory?
Yes indeed. Bots can be used to automatically level up your characters, loot and kill mobis, farm mesos (gold) and free NX for you. Hacks can be used to teleport, get increased damage, auto loot and increase your movement and attack speed. However, there is no direct way to get unlimited money, NX, a god mode or legendary items through hacks. This is an online game and all important account data is stored on the game servers and cannot be hacked using any tools.

Is it legal to cheat and will I get banned?
Cheating in online games including MapleStory is completely allowed everywhere, but Nexon has the right to ban any player for any reason, so keeping a low profile and downloading quality hacks is highly recommended to avoid any risk of bans. 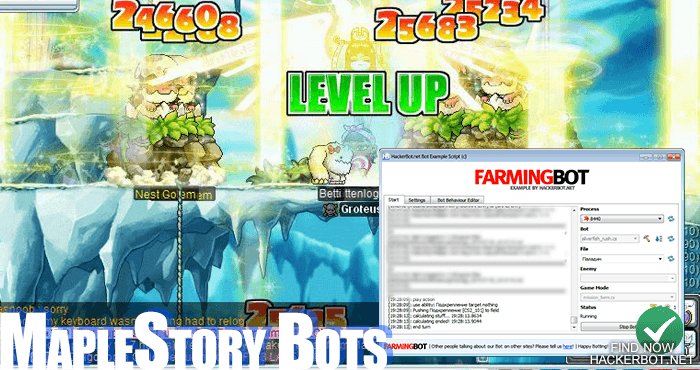 Maple Story Cheats
There are quite a few ways to cheat in MapleStory. Most of those cheats are focused on either make more money (mesos) or level up faster. There are also situational exploits that make farming gear, money and levels a lot more effective. However, the most popular way of cheating in MS is bots, since they are almost undetectable. Most cheats work for all classes, but work best with ranged ones. As with all cheats: The more obvious a cheating method is, the higher the chance that people will report you for cheating, so make sure you seem as human as possible. Also keep in mind that if you abuse cheats, then you might ruin the fun not only for yourself, but foe everyone using the same hack. The same goes for secret merchant strategies: If you tell other people how to use a very effective was of crafting, farming, alchemy or whatever to make lots of mesos, then soon everyone is going to use it and it becomes useless. 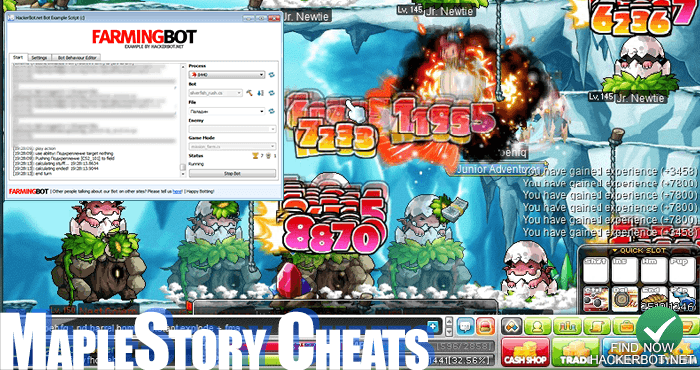 MapleStory Bots
Bots for MapleStroy are basically just programs that will take control over your ingame character and perform repetitive tasks for you automatically. Bots can kill mobs, collect items, sell items, craft, trade, do any kind of crafting and are generally quite effective at automatically making money and leveling your character up. In the past it was even possible to combine bots and hacks in order to farm whole maps within seconds. So if you are on a map and you see mobs randomly dying, then you know there are hackers on your server. Since MapleStroy is a 2D game, bots are very effective and almost never get stuck. Bots can even be used to amass such wealth, that you might even be able to sell your inventory for real world money. How fast you are able to farm mesos and experience really depends on the bot you are using and the maps you are farming, but generally you should be able to max out any character within 2 or 3 weeks. 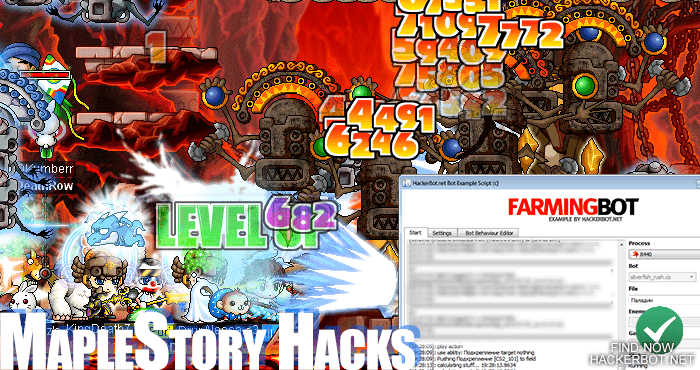 MapleStory Hacks
Injecting code into a game and changing the way it is processed you your machine is called hacking or using hacks. In MapleStroy it is possible to fly, walk through obstacles and even to manipulate projectiles that you shoot. However, most these cheating methods are being patched sooner or later. A few years ago it was even possible to get items, mesos and unlimited health using hacks. These days hacks are mostly used to farm quickly. Here are hacks that allow you to damage mobs that are nowhere near you, so all you have to do is enter a map and spam your attacks to kill all the enemies at once. It is important to consider however, that you may get banned from the game if you are using a hack that is outdated or if you are doing so carelessly. To be sure to avoid detection, it is recommended that you either use paid hacks or make 100% sure that the software you are using is up to date and working.

Nexon Cash (NX), Unlimited MP, God Mode (HP) and Money Hacks
In every game there are some values that would totally ruin the game, if everyone was able to change/hack them. In MapleStroy your HP, MP, NX and mesos are values that would totally mess the game up, if they were changeable. These very integral values are not stored your PC, but on the game servers. Now there is no way to change these values and people that claim to be able to get you money, hp, mp or items with some kind of generator, are trying to scam you. They may have fake videos that seem legit, but be assured that they either want you to fill in surveys or to steal your login data. – You have been warned; do not fall for these silly tricks. In single player games you can hacks money, but not in online games. – That is the general rule. The only way to get unlimited money is through dupe exploits that are based on temporary bugs in the game.