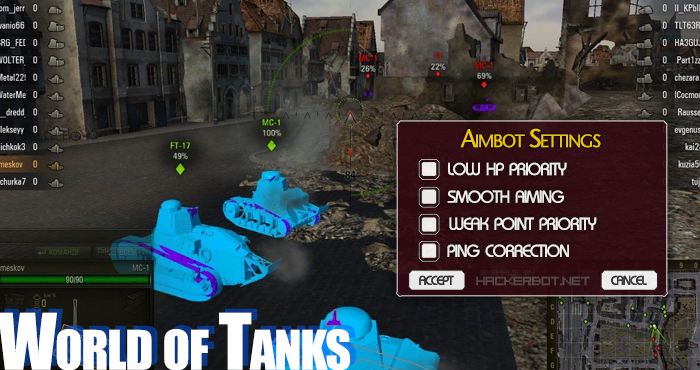 Cheats in World of Tanks are mostly ways and techniques used to farm more Experience, Silver and Gold or to automate certain actions in order to make your gameplay more effective. Most cheating methods in this game, such as ESP hacks, aimbots or farming bots, require software in order to work and cannot be achieved manually. Obviously, since this in a multiplayer game, there are no cheat codes, since cheating is not an intended part if the game experience. Cheats can either be achieved manually (mostly exploits) or through the use of software, such as hacks or bots. While cheats can accelerate your progression in WoT, they cannot possibly let you skip it completely. Especially at the higher levels of play, even bots are not able to farm silver effectively due to high repair costs and you might still have to grind manually using aimbots. However, at the highest level of play in World of Tanks, cheating is pretty common. Most of the world’s best players are using one script or another in order to increase their performance in the game. 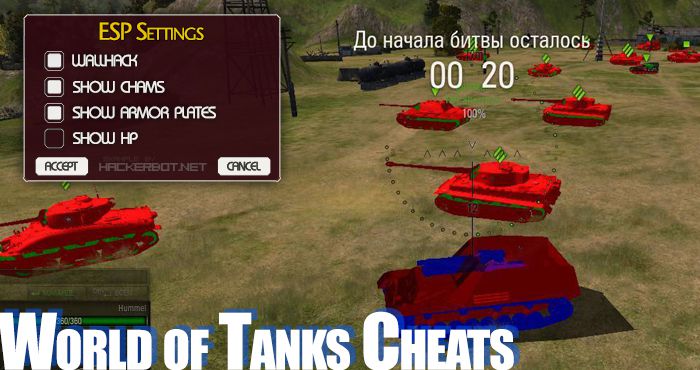 World of Tanks bots are programs that will take control of your account and perform automated tasks. Bots can be quite effective at farming silver and experience and will let you unlock higher-tier tanks a lot faster if used right. Especially at the lower levels of play (low tier battles) bots can be quite effective, since the repair costs are not as high. While the best scripts are pretty proficient at fighting, most automated farming software will use scout and light tanks in order to spot enemies and earn experience and silver that way. But even the scripts that are able to fight will get less effective, as you progress through the tiers. Also bots will require you to either have huge piles of silver or gold, since the silver earned will not always exceed the repair costs and ammo consumption. This is probably the biggest difference between WoT bots and other game bots: WoT bots can actually make you lose money if they are not configured correctly. Bots will generally allow you to skip most of the grind involved in playing WoT is a serious manner. However, configuring them correctly might take some time.

Bots are in their essence not detectable, since they generate user input and do not inject or change code in the game client. However, if other players are able to tell that you are a bot, then you might still get reported to the game mods manually and your account might still be in danger. However, looking natural in WoT is pretty easy, since players do the silliest things anyways. But as always we recommend that you do not farm 24/7, but turn off your bot for at least 3h a day to make sure you cannot be detected by server-side bot detection. 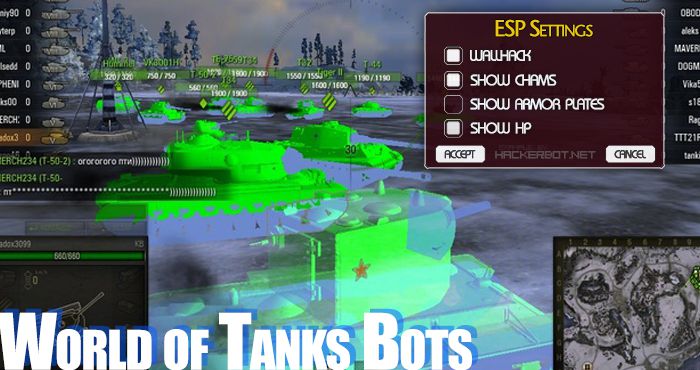 World of Tanks Aimbots and Hacks

Hacks are pieces of software that injects code into the game client in order to add functionality that would not otherwise be available in the stock version of the game. One of the most overpowered hacks in WoT is the ESP hack (ESP= Extrasensory Perception). This kind of hack allows you to display enemy positions at all time (spotted or not) and will make outmaneuvering them and shooting them a lot easyer. ESP hacks will show you the enemy through walls, show their distance and their health if configured correctly.  Aimbots are another very effective kind of hack in World of Tanks. Aim bots is software that will automatically aim and in some cases even shoot for you at the press of one single button. Aimbots can be set to shoot for weak points in the enemy armor and and avoid shooting surfaces that are likely to ricochet or fail to penetrate. Aimbots are fairly popular among pro WoT players, since shooting the right weak points and the points with the highest chance to penetrate is fairly important in higher tier matches. And as you might imagine using gold ammo (premium ammo) along with an aimbot is quite overpowered. However, you will do very well using normal penetrating and explosive ammo as well.

Hacks are in their nature detectable, since they do change the game client’s functionality and can potentially be banned if the developer gets their hands on them. However, if you are using a paid hack or one that is 100% up to date and undetected, then you are fine. You should however try avoiding outdated old hacks with no clue on whether it is detected or not. Always make sure your software is up to date or you will put your account at risk. 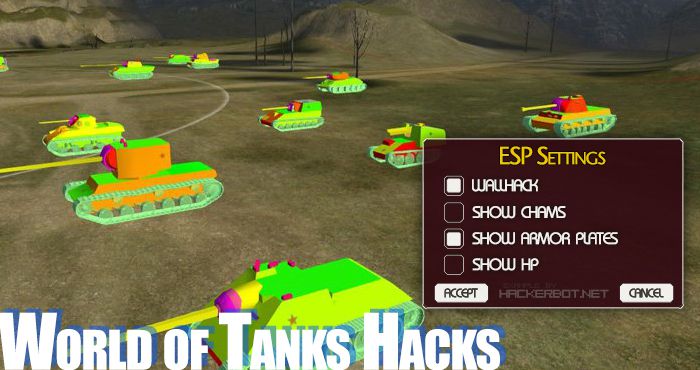 As we previously established, hacks are able to detect if people have vision on you or are aiming at you, now while displaying warnings is very helpful, it does not necessarily save your life in a combat situation. So hat some very clever World of Tank cheaters have done it to create software that will not only detect if people are aiming at you, but will also react to it automatically. These tools will automatically detect where an enemy is located and at what angle he is most likely to shoot you, then angle your tank in such a way that there is a higher chance for the projective to bounce. Now obviously there is still some randomness involved in the penetration vs ricochet process, but statistically this kind of software will save you at least 50% of your health when you get hit overall. However, the use of anti-penetration tools comes with its downsides as well: While the bot is re-angling your tank, it will be hard for you to aim, since you have no control over your vehicles movements during the process and then the obvious fact that not all tanks have the same plating / armor and the same geometry. This kind of cheat works best with the kind of tank that has all around decent armor and no obvious and huge weak points. While this kind of cheating method has certainly been used in the history of World of Tanks, it has never been made publicly available for everyone to use. We do however suspect that there are private groups of fairly competitive players that keep the software up to date and use it in competitive WoT play. However, no one can be certain, since the software is literally undetectable by any means is based on memory reading and not DLL injection. Maybe one day we will get our hands on this very exciting cheat.

How much do World of Tanks Bots or Cheats cost?
You are looking at around 10 to 20USD per month for most bots and hacks. There may also be free stuff out there, but that usually gets detected within days and may get your account banned before you even start getting benefits.

In every MMO game there are certain things, values and currencies that must not be hackable in order to keep the game running. These kinds of data are not processed on the user’s PC, but the game server. In World of Tanks these kinds of values include: Your tank unlocks, your gold, health, experience, research, premium ammo, your silver (credits) and your ammo as well. All these values cannot possibly be changed by any kind of client-side software, since this data is processed and stored on the WoT servers. Imagine if it was possible to get Unlimited HP in World of Tanks: In a matter of days every player and their dog will use this exploit and the game would stop being fun, since everyone has unlimited health and the game is doomed. Everyone claiming to own some kind of software that allows you to change any of these values is a scammer. – These people will want to have you fill in surveys, click monetized links or give them your login data. So do not fall for it, please. You have now been warned.

Is it legal to Cheat in WoT and will I get banned from the game if I do it?
While cheating in games is legal and has been for thousands of years, you can indeed get banned from the game for doing so. If you are being quite obvious about your sahdy activities, then people will most likely report you and your account may get reviewed by a game moderator and if you are unlucky, banned permanently. The only other way to get yourselves banned is to use outdated cheating software.