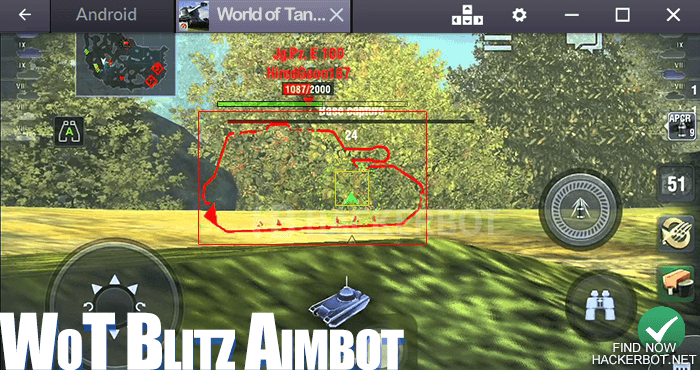 A WoT Blitz Hack is any modification, tool, software, app or method for players to gain unfair advantages in World of Tanks Blitz, get more free gold, money, credits, unlock more tanks and get other goodies. – While there are many possible cheats for WOTB, hacks and generators for unlimited money do not exist and are always fake.

Generally, there are 2 ways of hacking any online multiplayer game or shooter on mobile phones: Either you use a modified game file (APK for Android and IPA for iOS) that has cheats hardcoded (modded) into the game itself, which can allow you to instantly aim (instant aim speed), speed up turret traverse, speed up reloads, speedhack your tank speed, auto aim, see through walls and a lot more. However, the downside of hacked game files is that they generally do not last very long and with every update that the actual game client gets, the World of Tanks Blitz Hacked Client has to be updates as well. - So a dedicated team of cheat coders and developers are required to keep the app up to date and undetected at all times.

The other way of hacking the game is manually through applying simple value changes, speechacks or value editor tables / scripts, which is a lot more complicated, will require a rooted and jailbroken device, but will be outdated less quickly, meaning that it will work for longer after download. 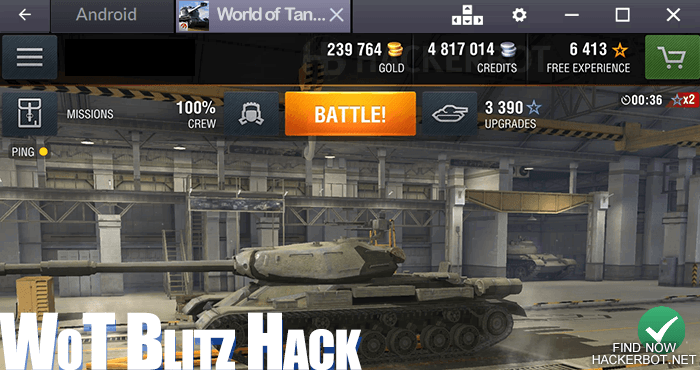 Auto aiming technology is pretty new in mobile games. While it has been used in games on PC and consoles for decades, the World of Tanks Blitz aimbot is now more than just a possibility. It is the most powerful cheat for the game at this time in fact. Auto aiming apps in general allow you to bind a button (usually a new custom touch-button on your screen) to the auto aiming and shooting (triggerbot) function. Once you hold down the button, the script will lick on to the closest target, aim for areas with highest chance for penetration and trigger your shot. The aimbot is especially powerful in World of Tanks Blitz, since it is not just about shooting the enemy, but hitting them where it hurts, considering angles of the armor, avoiding ricochet / bounces, finding spots with thin armor, hitting the ammo rack ect. For a player it is very hard to keep track of all the tanks, their armor, their weak points and then reacting quickly to hit the right spot to do max DMG in the heat of a fight and using the very clunky mobile controls for movement and aiming. However, for a script that is not a problem at all. 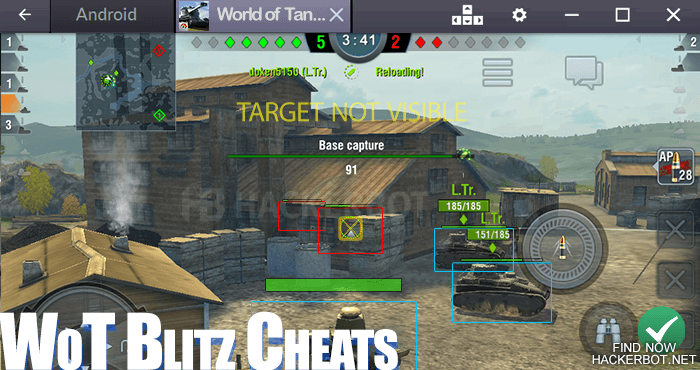 Anyone that has played the game for longer than a few hours, or even considers themselves a pro, knows that knowledge of enemy positions ans tanks is more than half the battle in any Tanks simulator. Enter the WoTB Wallhack that allows you to see all enemy tanks through walls and any other terrain or map object, see their distance, their type of tank, the ammo they are loading, player name, rating ect. Essentially this kind of hack allows you to keep track of all enemies on the map and outplay, flank and ambush them without any difficulty. While statistically this cheat is not quite as powerful in farming credits, EXP and gold as an auto aiming app, it is a lot ore fun, as it retains that sense of outplay and achievement that will keep you playing and enjoying PvP in World of Tanks Blitz. Highly recommended cheat and it is a lot more respectful toward other players as well with reduced risk of reports, since it is almost impossible for enemy players to tell if you can see them through walls. 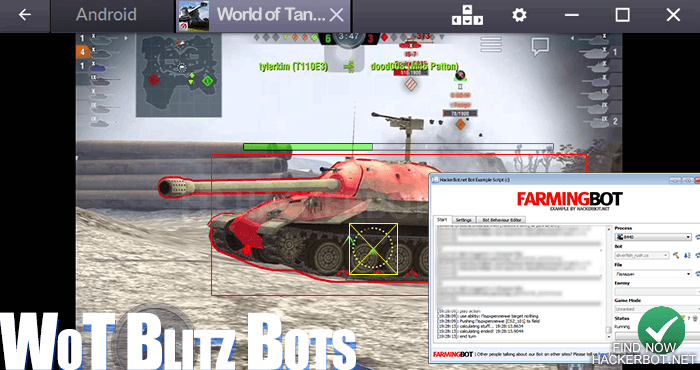 We all know that one of the most hated ‘features’ of WOTB is that you get to farm and grind the game for hundreds if not thousands of hours if you are intending to unlock all the tanks you really like and especially for tanks of higher tiers get to grind another few eternities to unlock all the upgrades or to dare repairing the darn things. Enter the farming bot that automatically joins games for you, preferably with a tanks that is of a lower tier and cheap to repair, automatically spots, shoots ans stays in save places to let your team either win or lose and you getting out of the game with a small profit on average. This kind of bot will farm the game for you through an iOS/Android emulator on your PC and slowly and for free unlock everything in World of Tanks Blitz that you would ever want to have. It wont be quick, you wont be the best player in the game (its an AI playing afterall), but you can slowly farm up without having to spend weeks of your life farming the game for credis and XP to unlock your favorite tanks.

On top of all the free XP and money, this is also good to improve your karma for using aimbots, as the AI will usually not get a lot of kills allowing the enemies to farm easily. So if you should ever feel bad, go for it.

What can and CAN’T World of Tanks Blitz Hacks do?

Is it legal to cheat in WOT: Blitz?
Cheating in any online game is just as legal as cheating in a card game: People wont hug you and love you for it, but it is certainly legal under any circumstances everywhere in the world. However, keep in mind that Wargaming has the right to ban anyone from their services at any time and for any reason. You are playing on their platform and they rule over it, so try not to annoy them. We recommend quality paid hacks that are kept undetected at all times instead of downloading some shady free stuff that you don’t know if it will get you banned or not.

Are WOTB Gold Generators legit?
No, they are most certainly not. And yes, I am 100% sure. Why? Because changing ones Gold is completely impossible using any tools, since this is an online game and all the important data about your accounts, tanks, unlocks, credits, gold ect are stored on the game servers belonging to administrators. - These servers cannot be accessed or written, unless you are a server administrator or game admin over at Wargaming, which you are probably not and if you were, you would not want to cheat in your own game.