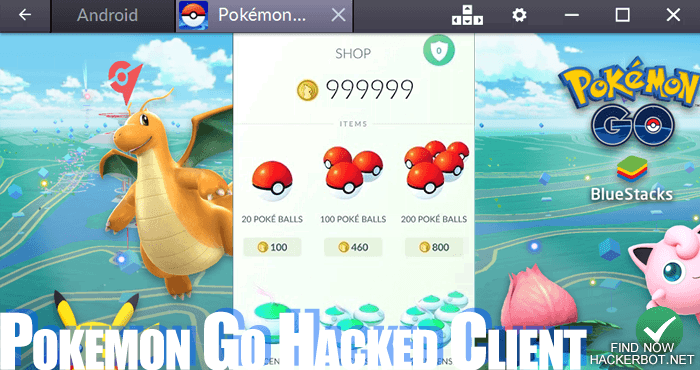 Is it possible to cheat in Pokemon Go?
Yes cheating is possible to using mods, hacks, fake GPS data (spoofing), bots and scripts in Pokemon Go. Hacks and Mods will enable cheats and all you have to do is download and install a simple modded game file. Bots can automatically catch pokemon for you and move around using fake GPS tools, scripts will throw perfect curve balls, great and excellent pokeball throws automatically ect. Howver, there are sadly no hacks for unlimited coins and unlimited star dust / rare candies and other items for Pokemon Go, since this is an online game and your ‘savegame’ is safely stored on the Niantic game servers that cannot be hacked using any tools.

Hacks and Mods for Pokemon Go are usually modified or modded game files that are simply and easily downloaded for free and installed instad of the original game on Android or iOS devices. Once the modded Pokemon Go game is installed, you simply start the game and you will have cheats and Pokemon Go hacks activated right from the start. Possible cheats include: Auto catching pokemon, auto curve balls, excellent/perfect throws, auto research completion and more. However, Pokemon Go mods are usually outdated quickly, so make sure yours are up to date before downloading. 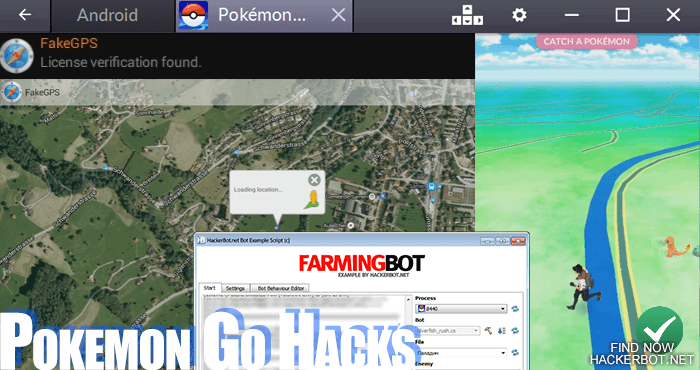 Imagine you don’t have to leave your home, walk or catch pokemon at all and an automated bot running on your phone or PC will simply do all the work of hatching eggs, catching pokemon, walking using fake GPS data, finding rare pokemon such as Snorlax, Lapras, Mew, Mewtwo or even Arceus on its own without you having to do anything. – That is exactly what a Pokemon Go catching and farming bot can do. It will automatically collect goodies from pokestops, fight gyms, catch pokemon, turn weak pokemon into candies and beef up your strongest pokemon.

Bots can theoretically be run on iOS, Android or PC, but generally are run on PC, since it offer the most stable internet connection and is the most popular platform among not only users, but also bot developers. The bot will connect to Pokemon Go directly and automatically play the game by sending packets. So you will not even need an emulator to bot the game at all. 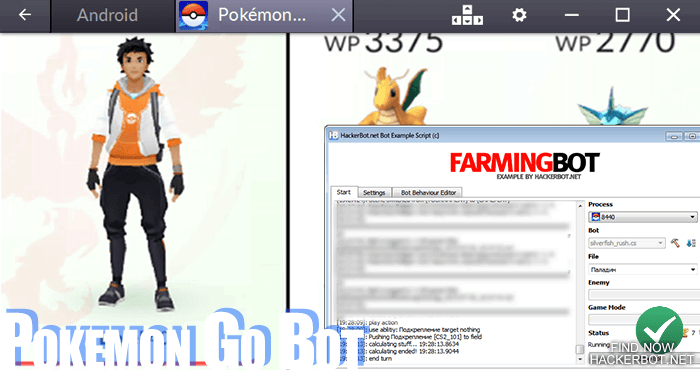 How can I cheat in Pokemon Go myself?

There is a surprisingly huge amount of ways to cheat in this very simple game. The most popular way to cheat by far is the use of Fake GPS data in order to travel wherever you want at any time, without having to, you know, actually go there, and in order to keep walking an hatch your poke eggs faster. Using automated bots to farm catch Pokémon is very effective at leveling your account as well that is gaining popularity.

There are also some other client side scripts for iOS, Android and Emulators that allow you to automatically get great poke ball throws, some scripts that allow you to trade Pokémon for candies quicker without having to press a lot of buttons and some minor hacks. However, there are NO hacks or generators for PokeCoins (Money), unlimited health, CP Hacks or item hacks for master balls ect of any kind. (These values are processed on the server and cannot be hacked) 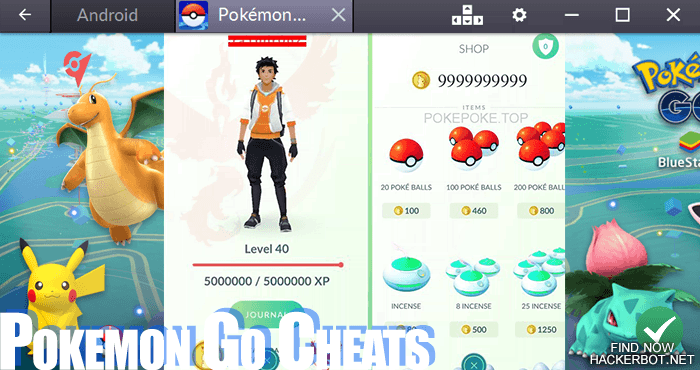 Hacked Game Clients in the form of modded APK (Android) and IPA (iOS) files are the most common and safe way to hack Pokemon Go at this time. However, there are no infinite Coins, or unlimited XP, Master Balls and so on. This is an online game and all the important information on your account, such as your Pokemon, their CP and so on are stored on the Niantic servers that cannot be hacked using any means. So with other words: Hacks such as CP hacks and God Modes are unfortunately not really in the realm of possibility.

However, modded game files can allow you to catch Pokémon instantly, change coordinates, move by dragging your screen, use game lag to duplicate items, auto collect pokestops, auto fight and make your “hitbox” bigger so you can collect and catch more stuff around you. Most modded game files are paid downloads, but once in a blue moon, they are offered for free as well. Don’t trust people offering them using surveys.

This is how you can get fake GPS data to work in Pokemon go. This little hack works best on Android, but may also be quite possible on a Rooted + Jailbroken iOS device as well. Root is required, since you need to run a system app with root privileges to inject fake GPS data into the game:
1. Root your Android / iOS / Emulator
2. Install a Fake GPS App and give it root privilgeges
3. Start Pokemon Go
4. Start the Fake GPS App
5. Change your coordinates in The GPS app
6. Play Pokemon Go and teleport around
7. Don’t teleport too far at once. Keep it realistic. No more than a quarter of a mile / 500m at ance.
8. Congratulations, you just hacked Pokémon Go yourself.

Are Fake GPS Hacks Detectable and will I get banned?
It all depends on how you are using the cheat, but if you are knowledgeable enough to get your mobile device rooted, and getting this to work, then you will probably also be able to apply common sense and not get banned. You will generally get soft-banned for a few hours if you “teleport” too far instantly. If you want to “travel” large Distances using Fake GPS data on Android or iOS, you will need to turn the game off for a reasonable amount of time, then change your GPS location and start the game again. Traveling instantly can easily get you banned permanently, especially over very large distances so try to keep everything under half a mile / 1km and you should almost always be fine.

However, the anti-cheating measures from Niantic, the developers of the game, are likely to be amped up soon. So I would recommend you travel in the smallest increments possible. Just to be sure. Especially if you want to cheat on your main account.

Why is it impossible to get unlimited PokeCoins, Master Balls, Stardust, Incubators ect?
This is an online game. As you certainly have noticed Nintendos Severs have to be working in order for the game to run on your side. That is also the reason why you can’t get a God Mode, or Master Balls or free PokeCoins in any way. Because these datasets concerning the inventory of your account are stored on the Servers and cannot be hacked. Anyone that claims to have some kind of “generator” or “adder” that gives you legendary Pokémon like Mew, Mewtwo, Zaptos ect is trying to get you to fill in some survey, download some virus, maybe both or scam you in some other way. So don’t trust people promising the impossible. BTW that applies to life as much as to Pokemon Go as well.

Is Hacking Pokemon Go easier on Android, iOS or PC?
As always the easiest way is to emulate an android device on PC and then cheat that way, it will easily allow you to set up scripts, advanced bots to farm Pokémon and travel using fake GPS and automatically transfer Pokémon away for candies, automatically evolve, automatically hatch and incubate ect.

Between Android and Apple iOS devices its definitively easier to cheat on Android, since it is more popular in terms on numbers and easier to preate scripts for with Google giving a lot of tools to even more people. However rooting you phone is a must for fake GPS, so you are literally running the risk of soft bricking your phone if you don’t know what you are doing, which is why I really recommend either doing it on PC first or having a pro do it for you. Back up your phone before you try rooting anything, please. Pokemon Go might not be worth bricking your 400$ phone over.

Are there Auto Catching and Farming Bots for Pokemon Go?
Yes there are, but they all are used along with fake position data and require a rooted device. The only kind of script that does not require a rooted phone is the auto pokeball throwing script that will achieve great throws 100% of the time. However, these kinds of scripts are usually programmed on Windows PC.

Bots can potentially play the whole game for you, since it is pretty simple: Catch pokemon, roam around, use PokeStops, incubate eggs, auto walk, level up your character, transfer away pokemon with low CP, keep high CP, evolve high CP when farmed enough candies, keep highest CP evolutions. A bot can really do most things in Pokemon Go automatically. The only thing left would be to choose what Pokémon to power up with your insane amounts of star dust.

Is hacking the game legal?
Cheating in any kind of game is 100% legal all over the world. Of course people generally wont love you for it, but the worst thing that can happen is that your account gets a warning or banned from the game. Keep in mind that Niantic and Nintendo do have the right to ban anyone from their services.