A Garena Free Fire Hack is any tool, method or download that can get you an unfair advantage in Garena Free Fire, get more kills, survive longer, get more Diamonds, Coins and skins and other goodies. While there is a great many different cheating methods for Garena Free Fire on Android and iOS alike, such as aimbots and wallhacks, generators and hacks for unlimited free Diamonds, free Coins and Skins do not exist and are always fake.

In gaming terms a hack is the manipulation or modification of game code, game memory, game data or communication with game servers that allows players to gain significant advantages over other players in mobile games like Garena Free Fire. While there are many different interesting varieties of implementing such functionality, the most popular are game hacking tools and mods on the Android and iOS mobile gaming OS. – Options and features that can be expected in a good Free Fire hack may include but are not limited to: aimbot, wallhack (ESP), speedhacks, teleporting cheats, no reload, no recoil, improved aim assist, damage hacks, no spread, semi-god mode, invisibility, noclip and many more depending on the game version, what hacks are possible at any time, what server checks are implemented, the mobile OS (Android or iOS) and many other complex factors. High risk and high reward is what auto aiming apps or ‘aimbot’ tools offer you in any shooter, battle royale and in Free Fire specifically. An average aimbot will be able to aim automatically, automatically shoot, lock onto enemies, allowing you to shoot them manually and will usually offer the option to turn the aimbot hack on and off. – While this way of cheating in Free Fire is extremely effective at getting kills and therefore surviving and winning more rounds, getting more free Diamonds, Coins /Money and free skins, it is also a way of hacking Free Fire that can easily be detected by other players and is able to get you banned from playing easily. So if you are going to download any aim bot or similar app, you will want to use it very carefully to ensure your account is safe. One of the most iconic cheats available in Free Fire is the wall hack or ESP / VAC that allows users to see enemies, supply drops, grenades, loot and other important items through walls. – This is usually done by highlighting players and items using colored boxes, overlays or similar colored geometry. This extremely powerful kind of hack provides you with an extreme advantage throughout the game, allowing you to loot the best weapons and armor quickly, avoid or find enemy players, pre-aim shots, gives you a huge advantage in close up duels and so on. A good Free Fire wallhack will not only allow you to survive easily, get the best gear, get more kills, but also no still enjoy this great game more than with other mods or hacks downloadable for Free Fire on Android or iOS. Aside from the commonly known ways to cheat, there are also a variety of other features that may be implemented, such as improved aim assist, auto croutch, no spread, no recoil, speedhacks, teleporting, auto looting, partial god modes, damage hacks and a lot more. What cheats are possible at any time depends on the version of the game, what data is processed on the game client, the OS (Android or iOS ect), and some other factors. The most common, prolific and generally preferred way such Free Fire hacks are downloaded is in the form of mods and mod menus. Mods are highly modified versions of the Free Fire standard game files from the Android playstore (APK) or the Apple appstore (IPA). These modified versions are created by decompiling, reverse-engineering, modifying and recompiling the Free Fire game app so that cheats can be used easily and without any knowledge of game hacking techniques by users, which makes mods the most popular cheat for Free Fire by far. Free Fire Mod Menus are very advanced mods that usually will come with a huge variety of awesome hacks and will also provide you with an in game menu that allows you to not only enable or disable individual hack features and options, but also configure them in many cases. The top best mod menus out there will even come with an option to auto-update the mod once a new patch is pushed to Free Fire and the mod needs to be updated to the latest version to keep working.

If you want more cheats and mods for mobile battle royale (BR) games, also check out our hacks for PUBG Mobile, Fortnite Mobile and our PUBG Lite Hacks. Free Fire is an online game service provided by Garena and that means that all important player data is stored on online servers. What that means in practice is that, as awesome and overpowered as it would be, it is sadly impossible to get unlimited diamonds, money / coins, free skins, loot boxes / crates, season passes or fully working god modes in Free Fire using any tools, mods or other means and software. Anyone claiming otherwise is probably trying to bait you into a Human Verification Survey scam and should probably not be trusted.

All Diamond Generators, Money Tools and Coin Hacks are sadly fake and always will be. If you do not believe this, then do by all means feel welcome to try the Best Android / iOS Game Hacking Tools to try and modify your Diamonds and Money in the game. However, do not do so on your main account, as modding game data can get you banned. Android is without a doubt the superior mobile OS to use Free Fire cheats on, since there is a huge community of developers and downloads are much easier to find. However, installing working software will still take some time and will in many cases require you to use either a rooted device or emulator, replace some OBB system files and follow the outlined steps for installing your mod carefully. However, you are also more likely to get banned on Android due to the prevalence of modding on the platform. Cheats for FF on iOS

While it is possible to get Free Fire mods working on iOS, the process is quite a bit more involved than it would be on Android and legitimate files are generally harder to find, since there are less developers on the iOS platform. You will certainly need a jailbroken device and emulation sadly is currently not an option either, you will need a modded appstore to install any modded game cleints and not all clients use the same appstore. Generally, I do recommend simply using an Android emulator, but if you are set on using iOS, there is still a way to get working tools and make them work. 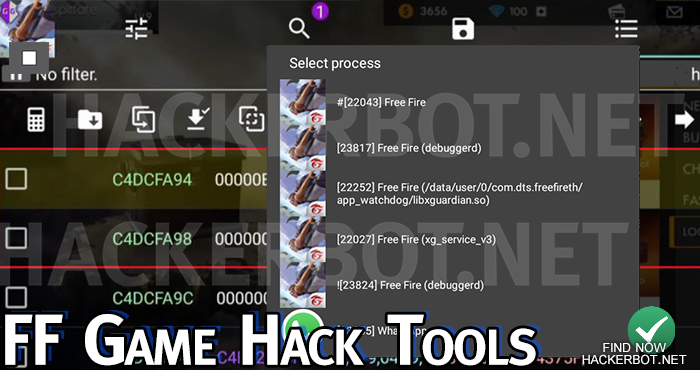 Cheating with No Root / No Jailbreak

While in theory no root (Android) and no jailbroken device (iOS) is technically required to run FF mods or modify the Free Fire game app, which is also possible using virtualization container apps, initiating cheats will be much harder without root access to your mobile device. For newbie users and people without computer engineering degrees we recommend using an emulator that can be rooted instead of rooting their actual physical mobile phone, unless it is old and can be bricked. We recommend never rooting or jailbreaking any device you cannot afford to lose, since that is a real possibility when making such basic alterations to a closed-system. The smart thing is to emulate instead on a PC where the virtual machine can easily be whipped, should anything go wrong.

Game Hacking Tools to use in Free Fire

If you are at any specific point in time unable to find working mods from trusted and safe websites, then there is always the option for you to try and create your own hacks for this mobile battle royale shooter using cheating tools that work for your mobile device and are able to modify the memory data for Free Fire.

However, before you download any tools and connect them to the game you must take precautions: It is essentially that you create a 2nd account, ideally a secondary google account that you use to hack games. That way if something goes wrong and your account get banned, your actual main account is unaffected and safe. If you want to get started learning how to hack games yourself, start with this tutorial. Keep in mind that getting good at manually modding game memory takes a lot of time and your first attempts won’t be perfect, so follow tutorials by people that know techniques you may not be aware of yet.

The only way to actually and really get unlimited free Diamonds and coins in Free Fire is not to use some kind of fake ‘generator’, but to use a neat little ting called ‘private game servers’. – This in essence means that you mod the Free Fire game app to connect to a different server than the official Garena game servers for Free Fire, which allows the owner of that server to make all kinds of rules and decisions that would not be made on the standard servers, including cheats for all or unlimited money, free purchases, free skins and so on. However, the only way that private servers for Free Fire can be used to hack the game is if the server software either gets emulated or leaked, which will allow people to set up their own game servers. So while this is without a doubt an exceedingly amazing way of getting goodies in game, it is also something that does not happen for every game out there.

Exploiting is the use of game bugs in order to gain an advantage and cheat in Garena Free Fire on Android or iOS alike. While other cheating methods are limited in the possible features by server-side processing, exploits can potentially get around that and make stuff like free Diamond cheats, unlimited Coins , free season pass, fire pass, ranked hacks, legendary skins and even stuff like invisibility, god mode and unlimited ammo potentially possible. – However, as specific exploits and glitches need specific bugs to be present, these circumstances and extremely rare and temporary, as the developers will certainly patch and hotfix such bugs as soon as they become aware of the issue. So while exploits like item duplication glitches, free purchase exploits, glitching under the map and similar are awesome, you need to keep an eye on the FreeFire game hacking forums to catch them as they are active and not patched yet. Another big upside of exploiting is that it usually requires no root and no jailbrake and no download in order to do.

As with every mobile game under the sun, there are thousands of shady app downloading sites, mod downloading portals, appstores and similar shady providers that offer ‘mod money’ as a feature in Free Fire mods. - -All of these offers are false advertising as cheats for unlimited Diamonds, Coins, free Season / Fire Pass and free Skins are not possible in FreeFire due to server-side processing as we have elaborated on already. It is in the users interest to now download such files, as they are certainly not going to include the software features advertised and may even be containing malware. – Certainly one should install such apps on an emulator and not ones actual physical device if one was to feel compelled to try it, not believing our warnings.