A Rules of Survival Hack is any modification, tool, software, app, technique or other means for players to gain unfair advantages, get more free gold, free diamonds, legendary skins, free in-app purchases and more goodies with no root and no jailbrake required on both Android and iOS devices. – While there are many different working cheating methods, generators and hacks for unlimited free diamonds, gold / money and skins do not exist and are always fake.

RoS is a mostly server-sided survival shooter, which means that the most effective way of cheating is through the use of hacks, such as aimbots and wallhacks that allow you to see enemies and items through walls, making looting extremely easy, getting kills even easier, surviving more likely and give you a great chance at that turkey dinner and the gold and diamonds that cone with it and therefore allows you to farm more crates ect A. Rules of Survival Hack will usually come either in the form of a downloadable modded game file for either Android, iOS or PC or as a script that has to be used in a game hacking tool, such as GameGuardian, Cheat Engine or Game Gem depending on the platform you play on.

On mobile devices Rules of Survival hacks are usually packaged as mods or modded games / apps that can be installed instead of the original Rules of Survival game on your Android or iOS device. Once you start the hacked game version, you will have cheats enabled from the start or will be able to activate them in a trainer menu. To find working and legitimate hack downloads and use them safely, use this method. Rules of Survival Aimbots are software that is able to detect enemy players positions on the map and automatically aim your crosshairs at them if they are in field of view. Aim bots are usually most effective on assault rifles, snipers, then machine pistols, shotguns and pistols. Assault Rifles are best, because they can be used at any range and will be able to kill at any range using an aimbot. If you are looking to farm gold and diamonds quickly and for free in Rules of Survival, then using an aimbot is certainly a viable option and will allow you to get legendary skins more quicky. What really makes aimbots especially effective in Rules of Survival is that most weapons are hitscan and bullets have no travel time or bullet drop. – Overall just about the most powerful cheat that is not an extremely rare exploit, allowing you to get lots of kills and survive longer. 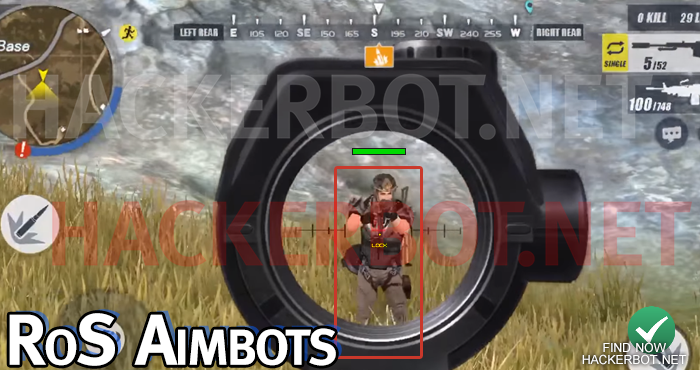 Wall hacks and aim bots for Rules of Survival work very similarly to each other, as they take advantage of your phone/tablet/pc having to know what is around you to display the game for you. These cheating apps scan your environment for objects, such as items, players, air drop crates, lootable players ect and display that information to you. In addition, the aimbot will automatically aim your guns at enemies in sight and shoot your guns (trigger bot) automatically to get more kills. Aimbots can be configured to shoot for limbs, head or body. The best way to go depends our your weapons, since a Barrett will always kill on a limb or headshot, but most assault rifles, such as the AKM, M4A1 ect will do better shooting for the head only. Either way these Rules of Survival Wallhacks will allow you not only to loot more times and weapons by finding them extremely easily, but also outduel any other players. While on PC cheats are usually run like any other application alongside the game, on mobile devices you will have to install a modified version of the game client. That means you need to download the modified version of the APK/IPA file. IPA mods are for iOS devices and modded APK files are for Android. On iOS a jailbroken device will be required to install Rules of Survival hacks, however on Android only some APK mods will require a root. You will have to download a new mod for every update that game receives, as old versions of the game client won’t be accepted by the game servers. Warning: There are no Rules of Survival Mods for unlimited gold / money, unlimited diamonds / gems, unlimited health, damage hacks, all weapons, level 3 gear, unlimited crate openings for cosmetics and there are no online generators or online hacks of any kind. – Beware: These are usually survey offer scams and human verification offer fraud. You have been warned. The easiest, most practical and the most sought-after way of cheating in Rules of Survival on mobile devices is the use of mod menus: These are essentially prepackaged cheats that come inside a modded game on your Android or iOS device and after downloading and installing the hacked game you get a menu that can be toggled that allows you to enable or disable whatever cheats come packaged in the mod called a Rules of Survival Mod Menu.

Hacks that may be included in such a cheat menu for Rules of Survival may include but may not necessarily be limited to: Aimbot, wallhack, extreme aim assist, damage hacks, speedhacks, no spread, no recoil, fast reload, no reload, teleporting, running faster, no grass and many more options that may be possible depending on the platform you are playing the game on, the update you are playing on and many other factors. If you are looking to find working and undetected mod menus and hacks for Rules of Suvival use our Finder Tool to find the latest and best cheats. If you are unable to find any working hacks or mods for Rules of Survival because they are not working for the current update of because they are very hard to find for the platform you are playing on, then you might want to consider the use of game hacking tools and memory editing software. – The great thing about using tools to create your own cheats is that such techniques and tutorials often work for multiple updates before getting patched or outdated in any way. You can find working tutorials using our finder tools as always. But please do not use any of our best Android game hacking tools or iOS tools on your main account before testing the techniques on an alternative or 2nd account first or you will very likely get banned.

If you are unable to download working hacks or create your own tools, then you can always try to hack other popular online battle royale games for mobile such as Creative Destruction, Fortnite Mobile or PUBG Mobile that are also viable cheating options for people looking to hack online battle royale shooters.

Glitching or exploiting is the use of bugs in the game, especially server-side bugs, to gain cheats and advantages that would otherwise be impossible, such as invisibility, glitching under the map or through walls, god modes, unlimited free gold / money, free diamonds, free skins or even free in-app purchases. – The bugs that make powerful Rules of Survival exploits possible are always temporary, getting fixed in the next patch as soon as the developers become aware of them, so catching an active exploit requires you to track the relevant game hacking forums covering RoS carefully. – On top of all that exploits generally require no root and no jailbrake to use, making them the perfect cheat to use for newbie game hackers.

Scripts are mostly used on PC, but can be set up for Android and iOS as well. This kind of cheat is not quite as powerful as a full on auto aiming app or a wallhack, but is incredibly hard to detect and can optimize the smaller things that can get you killed very easily, such as not strafing while looting ect.

While they are not really an actual cheat, since they don’t give you anything on the official game servers of Rules of Survival that are oned by NetEase Games, private servers can still let you test weapons, emulate having unlimited diamonds and gold, play games with your friends and if you own your own emulated/private server, you may even be able to give yourself a god mode.

The only problem here is that creating a private server is only possible if you reverse-engineer the game servers yourself or get your hands on the actual server-side software used by the official game, which is very unlikely to happen as any decent game developer will make sure that that does not happen. – None the less, this is the one and only potential way to get money hacks and god modes in Rules of Survival.