Important: Speeding up the Android System internal clock will not speed up time in all apps on your device. Only the ones that actually use the clock to measure time. Game or apps that use process speed or server time to measure time will not be affected.

(Root Required)
How to speed up your Andrid clock (System Time)
Step 1: Get a Rooted Device and an installer for system apps
Step 2: Install GMD Speed Time.apk as a system app
Step 3: (Optional) Install any other time-speeding app
Step 4: Open up GMD Speed Time (or your specific app)
Step 5: Set the speedmultiplier (f.ex. 2x speed)
Step 6: Apply and enjoy 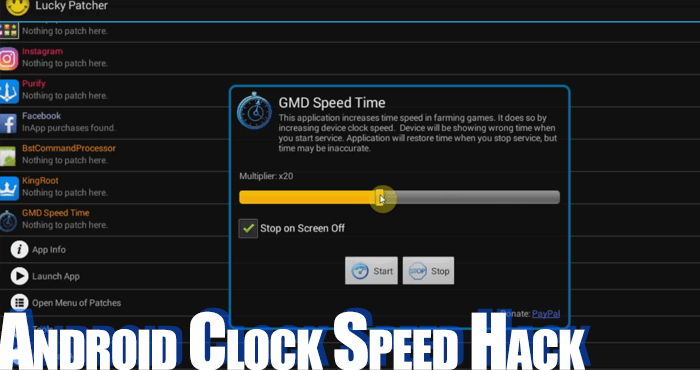 Does this require a rooted device?
Yes. The internal System Clock can only be sped up using system applications (root privileges). A rooted phone/pad/emulator is the only way to go.

On what kind of game does this cheat work?
Usually on farming / waiting games that are not online games completely. Some of them have online components and some don’t. If you turn off your WiFi or go into plane mode and you can still play the game, chances are it uses either the Android clock or application speed. Which means it can be sped up via speedhack or speeding up the clock.

What is this speedhack alternative you are talking about?
A speedhack speeds up the app instead of the Android internal clock. It works form some games and in some cases even online apps. If speeding up the clock does not work and the game is not 100% online, that may work for you. You can find a tutorial on how to set up a memory hack for android here.