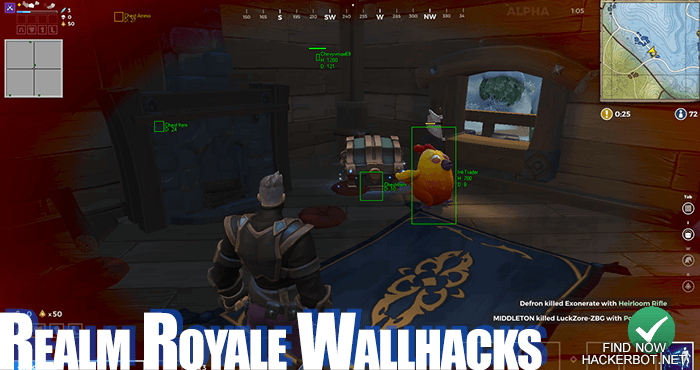 Is it possible to cheat in Realm Royale?
Yes, it is indeed possible to cheat  in Realm Royale using a variety of tools, such as aimbots to auto aim weapons and abilities for you, wallhacks to show you enemy players, loot and items through walls, scripts to automatically dodge and use abilities, bunny hop ect . Cheating software can be used in all kinds of ways to gain a significant advantage in Realm Royale and gring the game more quickly. However, god modes and unlimited money are not possible, since this is an online game and these values are stored in the Hi-Rez game servers.

Aimbots for Realm Royale are a blend between a hack and a bot that allow you to scan the map around you for enemies and automatically aim and shoot your weapons at them. – This also works for abilities, but requires soaftware that can lead targets correctly since most weapons in Realm Royale do have projectile travel time and hitscan weapons are not the norm. A Realm Royale Aimbot will allow you to amass kills / eliminations very quickly on almost any class and using almost any weapons and therefore allow you to survive more easily, get more shards, craft more legendary gear and therefore being more likely to get that crown royale.

However, if you abuse aimbots and use them in an obvious way or without respect for other players, chances are you will get reported, flagged and banned from Realm Royale forever. – So do try to respect the game and its players when using this kind of cheating software. Use it as a crutch for your lack of skill, not to dominate others or you will suffer the consequences. 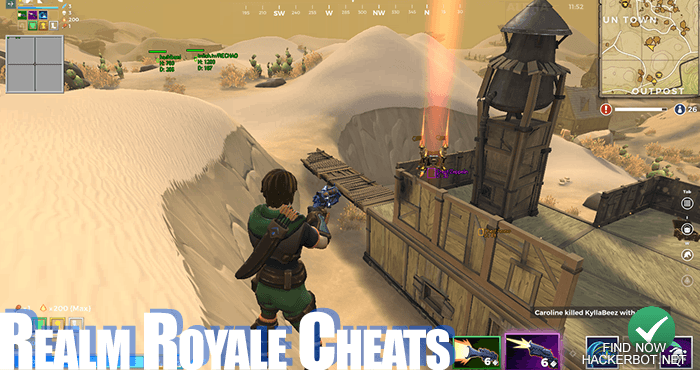 ESP or Wall Hacks are cheats that allow the user to see through walls, which basically means that any relevant item, player, chest, explosive or other kind of item will be highlighted with colored boxes on your screen. – This kind of Hack for Realm Royale will allow the user to easily find or avoid other players, easily find items and chests, gear up, flank enemies, get easy kills and so on.

The best thing about Wallhacks for Realm Royale is that this kind of cheat makes the game a lot easier for you without taking all of the skill and sense of achievement out of the game. You will have to aim, use abilities and win fights. However, this kind of software does give you a significant advantage and is also a lot harder for other players to detect or be annoyed by, which is a good thing as well when it comes to the use of this particular kind of mod. 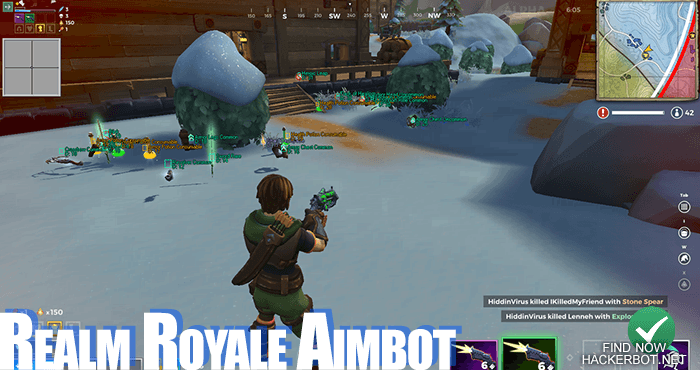 Other client-side hacks that may be possible in Realm Royale may include speedhacks, faster animations, super jump, teleporting and more. However, there will be no god modes or unlimited currency, since this is an online game and your ‘savegame’ is stored on the game servers.

Scripts for Realm Royale are another way of cheating that is very often used by the best of competitive players. Scripts essentially are able to reduce your reaction time by up to 99% by automatically using abilities, movements, potions ect. As an example a script can automatically use healing potions once your reach 50% health or it can automatically use movement abilities if you get bursted, allowing you to gain survivability be setting up simple macros. Scripts are technically cheating, but they are used by the best players in most games to gain those few more % survivability.

Another cheating method that has been used by people in Realm Royale is map glitches. People use bugs, exploits, glitches or hacks to get into the terrain and get under the map, allowing them to stay in the circle forever without getting killed by the players above on the map. - Usually these cheaters will stay under the map until the fog covers the whole map, try to outheal the remaining players using warrior totems, potions ect. This has been used as an easy method to get to ranked masters by a lot of cheaters. The best way to beat players that hide under the map is to get max armor, armor potions and try to outheal them at the end. They won’t usually be geared, so it can be done.

Aimbot vs Wallhack in Realm Royale

While an aimbot is without a doubt better at getting kills and will win you games more easily, it also comes with drawbacks, such as higher chance to get reported and banned from the game, usually a higher price and most of all less enjoyment of the game. – Because believe it nor don’t: Not having to have any skill or aim at all will not make Realm Royale any more fun for you. A lack of challenge is going to result in a lack of fun inevitably, unless you are of those very few people that thrive on dominating others.

Wallhacks on the other hand won’t take the challenge out of the game for you. You will still be aiming, tracking, losing fights, but you will have the advantage of knowing where unlooted containers/chests are, where other players are and how geared they are ect. However, while having that information will make the game a lot easier for you, it will not eliminate the challenge of actually fighting, defending a Forge ect. And a well-geared player with better aim will still kill you without problem if you don’t manage to flank and kill him quickly.