Are there any Cheats for CoD Advanced Warfare?
Yes there are. You got 2 major kinds of scripts that can be used: Wallhacks that will make enemies, explosives ect visible through walls and Auto Aiming programs that will automatically aim and shoot for you called “aimbot”. However, there are no God Modes, Prestige Hacks or Unlockers of any kind, since this is an online shooter and this kind of data is stored on the game servers.

Is it legal to Cheat in CoD: AWF and will I get Banned for breaking the rules?
Cheating in games is legal, has always been and will always be. Unless you are acting like a complete jackbutt and ruining everyones fun, then you really only have to worry about using outdated software. So try to stick with quality scripts and try to respect your fellow players. – Don’t be a bully or people will report you.

For more Information and Images, read below. Click here to find CODAW cheats. 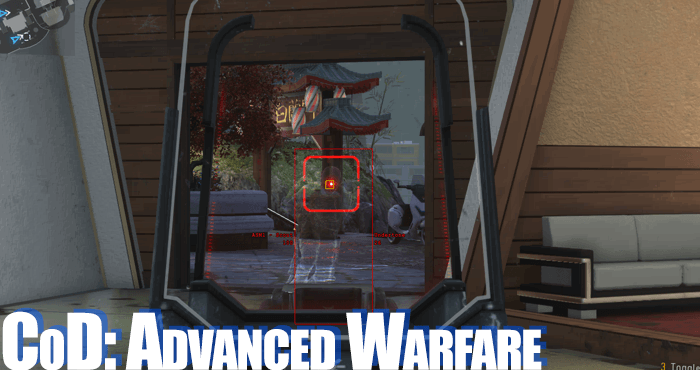 Advanced Warfare Cheats, Anti-Cheats and the Morals of it all
As mentioned before the most popular methods that will be employed in Advanced Warfare when it comes to getting around the rules will be scripts to increase awareness aka “wallhacks” and aimbots that will allow you to not only aim at enemies automatically, but also shoot them. These cheats have literally been around for as long as shooters have been played online and they still prove to be effective in next-gen video games. Now while these will certainly still work, the anti-cheating methods employed by major game developers in the last years have become more and more sophisticated with the introduction of statistics analysis and behavior analysis as a method of finding and banning cheaters. While you might think that cheating websites, such as HackerBot would be against the use of such methods, we actually condone it. Here on HackerBot.net we believe in “White Hat Game Hacking”, which is the use of cheats in online games not primarily to our own benefit, but to the benefit of others. While a lot of cheaters may get a kick out of dominating others and ruining their fun, we have found enjoyment in protecting new players, helping them to have fun and using our “skills” for more than just cheap PWN satisfaction. We love games, including the Call of Duty Series, and while we do like to cheat, we aim to do it in a manner that does not annoy other players. – For that exact reason we condone any and all software that will help to ban those cheaters that are using scripts to annoy others, ruin their fun and just simply are being d*cks. – We wish that they all get banned and left of torture their teddy bears instead. 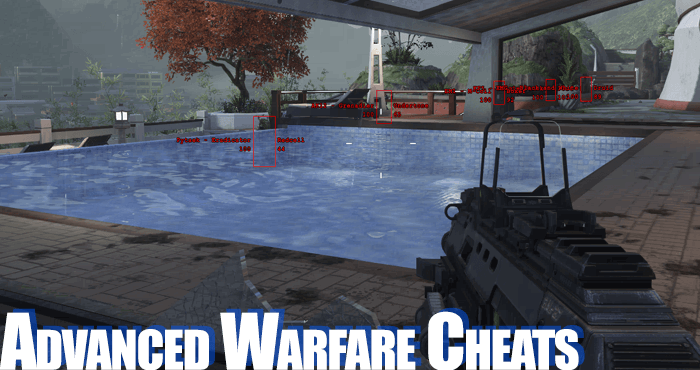 Auto Aiming Software in CoD: AW
Auto Aiming Software aka “aimbots” do and are exactly what you would expect when hearing the name: Its software that automatically aims at enemies and shoots them (triggerbot) for you. This is without any doubt the most powerful and  most easily detectable  cheat in AW. Sadly it is also the one that can potentially be abused the most: There are some in the community that would buy a hack and just jump into any old game and just hold down that aimbot-key and annoy a whole lot of people. Not only is that behavior socially despicable, it also robs the abuser of any fun and sense of achievement, after all there is really no skill in holding down a button, now is there. Thanks god, these people can be manually reported and usually get banned from the game pretty quickly. – We urge our members to report any and all cheaters, even if they are your friends, if they are being antisocial little babies using aimbots to PWN and insult others. 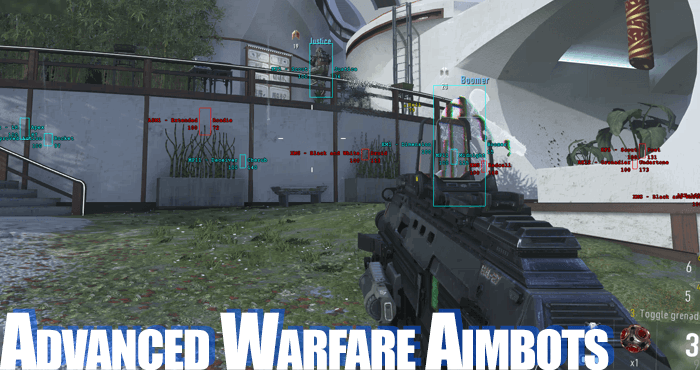 So when is it morally OK time to Use an Aimbot them?
Ever been in the situation where your n00b team is up against a team with 10 max prestige clan players and just gets mercilessly stomped and spawn camped? – Yes, you get that often? – Me too, and that is the perfect time to bring out the aimbot and kill some of those spawn camping, team switching wannabe-pros and even the playing field a little. While this is still morally questionable, one can argue that spawn-camping, team switching  and contributing to uneven teams in general is just as harmful as people stomping games using auto-aiming software. There are many unfair situations in video games: People going afk in team games, spawn camping, antisocial hackers, verbal abuse and so on. There are so many creative ways to use cheats for Good: Go hunt down the enemy hacker that annoys everyone, go kill the guy that calls everyone a n00b or is being racist, protect the n00b and so on. 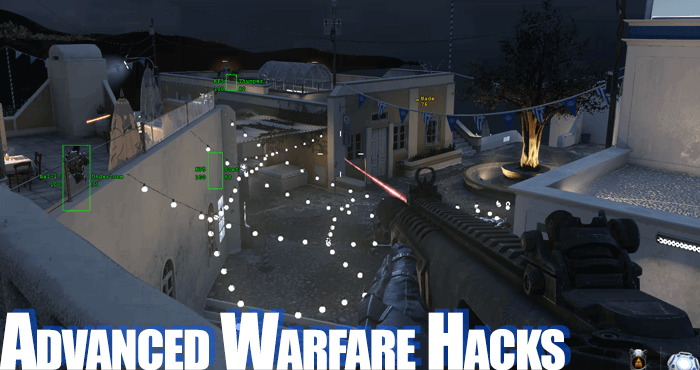 CoD: AW Wallhacks aka. ESPs
Ever had that feeling that some guy just always exactly knew where you were and always got the first shot in close-quarters combat. – Well he either was really good at the game or he was probably using an ESP script that showed him all the opponents’ positions. This kind or cheat will usually mark every single player on your screen using a square, dot , box or similar visual indicator, which allows you not only to track their positions, but also gives you a huge advantage in close quarters where it is vital to react as fast as possible to enemies appearing around a corner. – And that is a huge part of CoD as we know it. This kind of exploit is especially useful in Advanced Warfare, since with the improved movement system, engagements tend to be a lot more vertical, adding a bunch of layers to what we are used to from standard FPS gaming. ESPs are also generally able to display more advanced information, such as player names, health, if people have session on you or are aiming at you (warnings, alerts) and so on.

CoD:AW Console Cheats (PS4/XBOX One/Ps3/XB360)
There are NO cheats for the PS4 and Xbox One versions of this game, simply because the consoles have not yet been rooted and hacked. Hacking the PS3 and Xbox 360 versions might be possible, but not without special equipment and knowledge. One would either have to set up packed editing through a PC, or hack the console itself and implement a hidden process, which would probably require the help of a PC as well. – Either way even if you had the correct software, hardware and knowledge, you would still need a PC, so just buying the game on PC and cheating there is literally a lot easier, cheaper and the way everyone does it. Hacking a console goes far beyond just plugging in a USB stick and starting to play with hacks, since consoled so not allow for you to run any kind of process or app that interferes with other processes. – In order to circumvent that and get “admin permissions” on your own platform, you need to root the console, which will make automated updates impossible and make a lot of game impossible to play without more in depth-editing. Overall, you will not be able to hack your console without some kind of extensive IT experience. A lot of you think that there is some magical thing you “plug into” your console, but that is far from the truth.

Advanced Warfare Client Hacks
As of now, November 2014, the promised dedicated servers have not been implemented into the game yet and the pultiplayer matchmaking is powered by the lovely peer to peer matchmaking we all know from previous CoD games. – That does not only mean lag, small maps and limited amounts of players, but it also means that the host of a game could potentially get some very much overpowered hacks working in addition to his almost 0 ping advantage. Being the host of a game makes cheats that would otherwise be impossible due to server processing, such as god modes, unlimited ammo ect, possible. In other online games and earlier CoD title, such as CoD4, there were servers that could not be written/edited accessed by anyone and therefore server hacking was impossible. However, since in a P2P matchmaking system a player essentially is the Server, this is now possible. However, we do not expect a script to be released anytime soon, since all the usual cheats are already working and there is really no monetary incentive for anyone to create client hacks. – However, this kind of hack will be a lot more common on consoles.

How much do Advanced Warfare hacks cost?Around 10$ to 20$ per month can be expected if you want software that stands the test of time. The higher-quality stuff usually goes for a bit more, but has better support, security and more options.