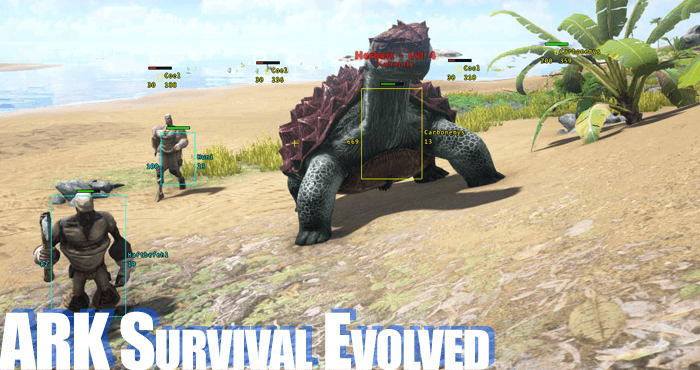 Is it possible to cheat in ARK: Survival Evolved?
Yes, naturally it is as in any other online multiplayer game. However, cheating options are not endless: There are aimbots that will automatically aim your melee weapons and guns at mobs and enemy players, farming bots, scripts some client-sided utility hacks, such as wallhacks that can show you mobs and enemies on your screen at all times to make finding players and mobs / items easier, but there are NO god modes, stat hack or item cheats of any kind outside the single player mode.

There is a whole heap of tools and cheats that can make playing ARK on multiplayer servers with 100+ people a lot easier, especially considering that the game does not offer all that much utility in terms of accurate maps, aiming, HUD and so on. The most popular kind of cheat for ARK: Survival Evolved would be the aimbot and the map hack. Aimbots, as the name implies automatically aim not only your guns and bows, melee weapons, but also your dinosaurs and other mounts. The map hack is popular because the in game map is quite barebones and makes it pretty hard to navigate, find places you were before and find other people. ESP hacks are also very useful, since they will make enemies, mobs and allied players in your vicinity visible even through walls. Other cheating methods include exploits, thereof there are quite a lot at the moment, that allow you to duplicate items, glitch through terrain and so on, scripts that will automatically perform certain actions like crafting, teleport hacks that will allow you to travel vast distances within seconds and other minor hacks like climbing hacks that allow you to climb every sort of terrain and so on. There are also single player cheats that can be activated through the admin console. There however do not work in multiplayer. 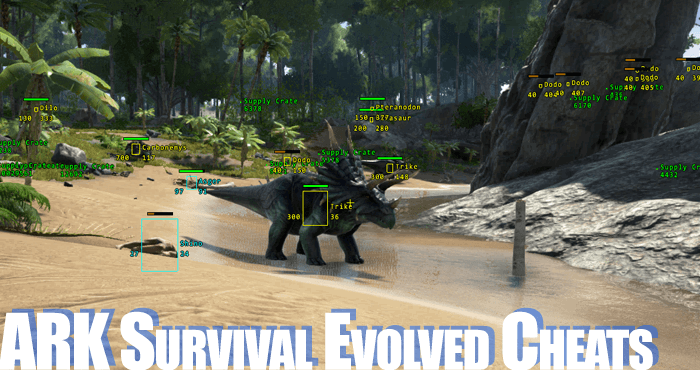 Press TAB to open the console then enter the following cheats:
- God: Enables god mode, you are unkillable except be careful, you can still drown.
- Fly: You are able to fly.
- Walk: Deactives flying and allows you to walk again.
- Teleport: You are teleported in the way that you are facing.
- Ghost: noclip, ability to walk through walls/objects.
- ToggleInfiniteAmmo: Gives you infinite ammo for your weapons
- addexperience 1000 1 1: gives you 1000 xp, you can change the value of 1000 to whatever
- giveresources: gives you 50 of any resource
- setcheatplayer true: Enables a menu
- setcheatplayer false: Disables the menu
- giveengrams: Unlocks all crafting recipes for your character
- settimeofday <timestring>: Changes the time of day, for example settimeofday 12:00
Press enter to activate any of the cheats. 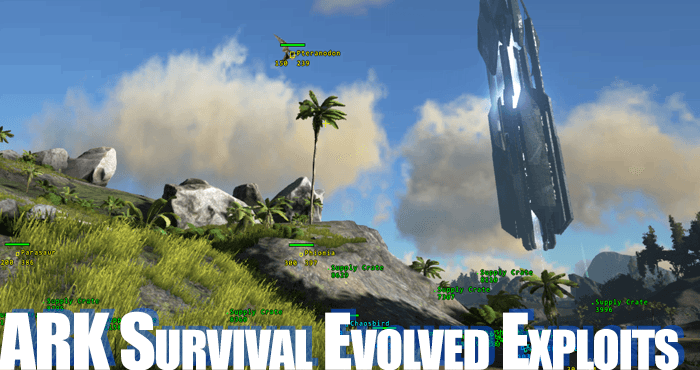 These kinds of hacks all make use of the fact that the game, in order for you to play it, has to be rendered on your PC first. – This allows a skilled coder to extract the location of any mob, player or any other map object on a server, even items. These can now be highlighted on your screen, aimed at automatically or can be shown on a custom map overlay. Aimbots are especially powerful when using bows and guns in PvP, since most dinosaurs are quite easy to aim at. ESP hacks are useful in figuring out the level and location of certain dinos at a distance, since the ESP can extract almost any kind of data about an ingame object and display it to you. Map mods can also track the paths you have previously taken, allowing you to easily find places on the map where your previously were, died or saw something interesting. – This is especially awesome if you are looking to retrieve some loot you lost in a fight. Map mods are also able to show rare drops on the map and in combination with teleporting software can be quite a nice way to get awesome gear, crafting materials and other goodies. 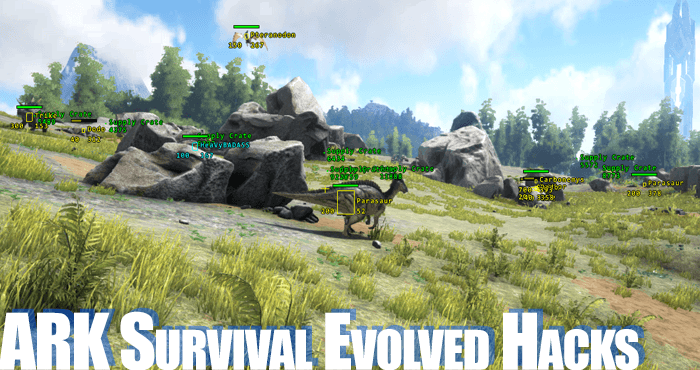 Unless you own your own server, there is simply no way to change important values in the game like your level, items, inventory, gear, Health, Stamina, Oxygen, Food, Weight, Melee Damage, Movement Speed, Fortitude, Crafting Speed, Torpor, Engram Points or Stat Points. This is due to the fact that these values are all processed on the server and cannot be hacked using any legal means. However, there are still some hacks that are possible using your game client: You are able to teleport short and long distances by using teleporting mods, though this may get patched in the future, you are able to climb up walls and walk through walls using noclip and climbing cheats, you are able to fly using nogravitiy hacks and so on. In the early stages of the game it was even possible to get unlimited raw meat for traveling long distances and having unlimited food forever, but that got fixed. These kinds of smaller hacks are a lot harder to find than the main stream ones, but may still prove useful if you happen to come across one.

Do Ark Hacks Work for DLC Expansion Packs as well?
Yes indeed aim bot and wall hack software will work for the DLC expansions, such as “Scorched Earth” and the free DLC packs as well. Any quality product will have been patched to work with all current versions of the game that are available to players.

Is it possible to Download God Modes and Unlimited Item Hacks?
ARK is an online multiplayer game and therefore a lot of the data, including your health, your inventory, weapons, guns, armor and so on are stored on the game server and therefore cannot be changed using any hack of program on your side. However, it would be possible to set up a private server or server emulator for you to give yourself items, god mode ect if you have unfettered Admin privileges to the server.