Short: There currently are no iOS emulators for PC and there probably aren’t ever going to be emulators for iOS on PC in the future either. Why? Because frankly, Apple has no incentive to have people run their OS on any system that they did not sell (iPhones, iPads ect). As opposed to Google Android which is not tied to a specific hardware company.

Fake iOS Emulators: Simulators
Anything you may find online that claims to be an emulator for iOS, will be software that will simulate something that looks kind of like the Apple iOS, but really has none of the core functions that a real emulated iOS would have: you won’t be able to connect it to your apple account, install apps, perform purchases, you won’t be able to jailbreak or root the thing. Essentially it’s just a fancy, Apple-looking  skin that is sold as an “emulator”.

Most of these fake emulators will come with monetization that automatically installs unwanted software on your computer, ads ect. With other words it borders on unwanted software/malware in some cases. 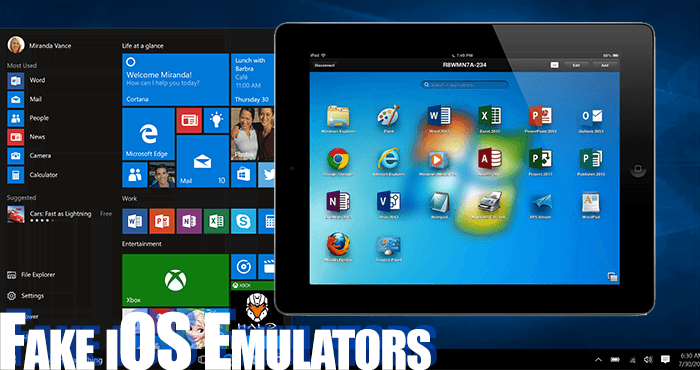 Why iOS Emulators probably never will exist
iOS for Apple devices is an operating system, but the company, Apple, is primarily in the business of selling hardware. They sell Phones, Watches, Tablets all using the iOS operating system. From a monetary point of view most of their money comes from hardware sales. So allowing people to install their iOS and all the Apps that can be installed on a PC or any kind of device not issued by Apple is not In their monetary interest, as it will probably decrease their hardware sales.

So Apple keeps the source code to themselves, as it is their good right to do and there probably will never be a real iOS Emulator. Probably at some point we might see a program that can run IPA Apple Apps, but even that seems very unlikely, since Android emulators are so incredibly easy to come by and will essentially run any App tat iOS would.

The only solution for now: Go Android!
Since there are no iOS Emulators, legitimate ones anyways, available for download anywhere, the only way to still play your favorite mobile games on PC is to simply go for Android. – There are literally dozens if not hundreds of Emulators for Android devices out there and Google is not planning on changing that anytime soon. They are not in the business of selling hardware and want as many people as possible to use their store and software, therefore not suppressing and discouraging the porting of the Android OS to any other kinds of devices.

If you want to hack mobile games, want to root a device on PC, bot mobile games ect, then Android emulators are really the way to go for now and probably will be for quite some time.